Monday’s suicide bombing in Peshawar’s Qissa Khwani bazaar was an outrageous suicide attack that left some two dozen people dead and many more injured. The victims were mostly Jamaat-i-Islami supporters attending a rally. 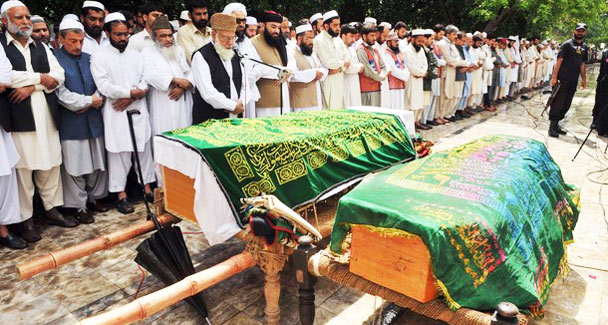 It is still not certain whether the target was the JI rally or a police contingent guarding it. Nevertheless, what is clear is the party’s flawed logic, for it failed to utter a single word of condemnation against the bomber, his handlers or even those orchestrating the violence. While the Jamaat leaders reiterated their stance that they considered the US a ‘terrorist state’, they also said that the bombing was the result of government failure, and called upon the provincial government to quit. That was all.

The JI and other rightwing parties, such as the Jamiat Ulema-i-Islam and the Tehrik-i-Insaf, have every right to oppose the military’s anti-terror operations. In fact, they may be doing so in good faith. But what is bad form and poor politics is their failure to unequivocally condemn the continuing targeting of innocent women, men and children. We are not sure of the JI’s views but its public reaction to every act of carnage makes it sound more and more like an apologist for those perpetrating this senseless violence. Matters have come to this pass in the erstwhile NWFP and the adjoining tribal areas as a consequence of the cowardly Musharraf regime’s duplicitous stance on the militants. The blame must equally fall on the then provincial government of which JI was a part. It acquiesced in, if not encouraged, the activities of the marauding militants as the latter expanded their influence.

However, we still believe that despite a perceived ideological affinity with the militants, that perhaps forces the JI to keep quiet over terrorist activities of the sort witnessed in Peshawar, the party needs to consider one fact. Notwithstanding its many contradictions and lack of electoral support, the JI still seems to strive for its aims within the ambit of the law and the democratic process i.e. through the ballot box. Therefore, it should not allow itself to be viewed as allied with those who push their agenda by indiscriminately killing innocent Pakistanis.

ISLAMABAD, April 21 (APP): The United States Wednesday rejecting allegations leveled by leaders of Jamaat-e-Islami regarding terrorists attacked in Peshawar on April 19 said that US always condemned such attacks. A spokesman of American Embassy commenting on April 19, terrorists attack on a peaceful Jamaat-e-Islami demonstration in Peshawar, that killed 24 and wounded 45 party activists and two police officers, said the U.S. issued a statement condemning the attack and expressed sympathy with the victims and their families.

The spokesman said, however, on Tuesday, April 20 and again today, Jamaat-e-Islami leadership appeared in the media alleging that the United States was responsible for the attack.

The spokesman while further commenting on these statements said, the violent extremists who committed the vicious terror attacks in Peshawar have made it clear that they seek to kill as many innocent Pakistani citizens, soldiers and law enforcement officials as possible.

“Those who attempt to divert public condemnation of extremist violence show contempt for this week’s victims, including their own party members, Pakistani officials, and school children,” said the spokesman.

Click here to post a comment
Fishy business and barracudas
Malik Ishaq, a most dangerous terrorist of Sipah-e-Sahaba, about to be released by Shahbaz Sharif’s government