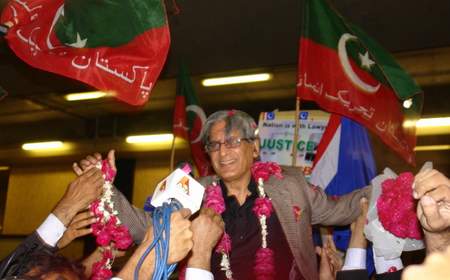 You too Aitzaz Ahsan, the leader of the legal community?

Wanderer said…
wonderful, much needed perspective on our “Lion” AA.

19 FEBRUARY 2009 08:53
Ahmad said…
Ather Abbas has lost his memory; though not surprising in this age group. How could the chief justice take notice of Benazir’s Shahadat when he was already suspended and under house arrest?

19 FEBRUARY 2009 10:10
Raazi said…
@Ahmad
Good point. What do you think about other issues that Abbas Ather highlighted in this column?

19 FEBRUARY 2009 10:23
Ahmad said…
@Raazi
From this single blunder you can imagine how credible his other “facts” are! Baba ji has certainly got carried away in his love for “Zar”dari

19 FEBRUARY 2009 19:52
Raazi said…
@Ahmad
You are being disrespectful to someone who is much senior in age. Who do you think is ‘mistake-free’ in our journalistic or political arena? Can you give me an example, Mr. unbiased?

20 FEBRUARY 2009 08:19
Ahmad said…
@Raazi
Two wrongs don’t make a right, Abbas Athar is misguiding us, twisting the facts as visible as a sun in daytime. You have to earn respect as a journalist. I didn’t intend to attack on him personally, but like baba ji I got carried away probably. His channel “Express” also is part of media, he says deceived by converting thousands into millions. Lawyers movement is a hope for this nation, don’t let it ruin.

Click here to post a comment
"Royally screwed": Pakistan (Army) has essentially abandoned Pakistani citizens in Swat and thrown them to the mercy of the TNSM and the Taliban
Swat: Sufi Muhammad says: Democracy is anti-Islam and anti-Quran.