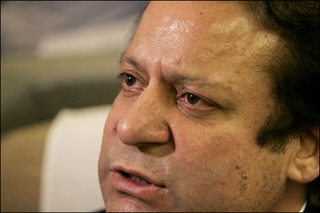 The aim of this post is not to belittle or doubt the principle-based politics and personal integrity of the Quaid-e-Punjab, Mujahid-e-Insaf, Ameer-ul-Momineen Mian Muhammad Nawaz Sharif.

The aim is to provide a chronological record of newspaper reports in order to thwart a Zionist/Secular/Leftist conspiracy against Mr Sharif.

Recently, it has been falsely alleged that Mian sahib is too poor to pay salaries to his personal media team. Nothing could be further from truth as is established in the following news reports.

First of all this news item from The News:

According to sources, Nawaz Sharif’s Public Relation Officer (PRO) Rai Riaz and personal cameraman are getting their salaries from the exchequer of Punjab government. The said PRO is also working as a consultant at Public Relations department.

According to daily Jang, Nawaz Sharif’s personal cameraman draws Rs35000 per month from the budget of the Punjab Government.

Let us turn back the clock by about one year, and we come across the following news item:

LAHORE – PML-N Quaid Mian Muhammad Nawaz Sharif has appointed Rai Riaz as his Press Secretary and Nadir Chaudhry as media coordinator in a bid to reorganise the media set-up.

According to sources, Nawaz took the step after showing his dissatisfaction over the poor handling of the media affairs since last many months.

The sources informed that Rai Riaz, had performed as Press Secretary to Nawaz Sharif from 1997 to 1999 when latter was the then Prime Minister.

He has been entrusted the same task again. He was considered to be one of his most reliable and efficient members of Nawaz team, the sources added.

During the time of exile, he showed his loyalty by keeping in touch with Nawaz in Saudi Arabia and London.

‘Nadir Ch has also reached Raiwind from London to assume his charge’,the sources added. He had acted as Nawaz Sharif’s spokesman in London,adding, that he had also performed as international and central media coordinator in the past. Nadir Ch had also worked as Director PIA in 1997 and 1999 during the second tenure of Nawaz Sharif.

Both the close friends of Nawaz would work as team to deal with all his activities on media, diplomatic and political fronts. They are also supposed to render their services as Personal Secretary of Nawaz Sharif.

Let us fast forward to 19 March 2010, and we come across the following news item:

LAHORE: The Punjab government, following the previous PML-Q government, has appointed a battery of consultants in the Information Department, Punjab, on contract basis by exercising discretionary powers in violation of the Supreme Court’s judgment.

An SC judgment passed on January 19,1993 in Human Rights Case No. 104 of 1992 states: “Recruitments, both ad hoc and regular, without publicly and properly advertising the vacancies, are violative of the fundamental rights. As such no post could be filled in without proper advertisement, even on ad hoc or contract.”

Interestingly, the SC judgment is part of the Punjab government’s contract appointment policy 2004.

However, according to the rule No-23 of the Punjab Civil Servants (appointment and conditions of service) 1974, under the head of relaxations says, “The Chief Minister may, for special reasons to be recorded in writing, relax any of the rules in any individual case of hardship, to the extent prescribed by him.”

A senior bureaucrat is of the view that though in the previous regimes, the same practice had been exercised by the CMs, yet it should be stopped since it is a violation of fundamental rights of citizens.

When contacted, Secretary Regulations (S&GAD), Mohammed Ilyas said the chief minister has powers to relax the rules. When asked whether the said rule should not be removed after the clear judgment of Supreme Court, he replied he only knew that the CM enjoyed the powers to relax the rules so he (CM) had the authority to make appointments on contract basis.

When contacted, Senator Pervaiz Rashid, spokesman of the PML-N, said all the appointments had been made according to the rules and regulations