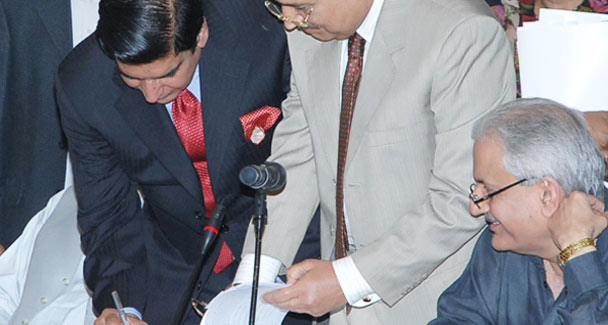 A great job has been done by Senator Raza Rabbani, head of the Parliamentary Committee for Constitutional Reforms. Well done, representatives of all political parties. This is the fruit which the nation was eagerly looking forward to for the last two years.

As promised by President Asif Ali Zardari with the nation that he would be very pleased to surrender the power of 58(2)b (a dictatorial legacy of General Zia-ul-Haq and General Pervez Musharraf) in order to restore full parliamentary democracy in Pakistan.

President Zardari had advised to constitute a committee for amendment in the constitution during his address to the joint session of the parliament last year.

On June 23 last year 27 members parliamentary committee was constituted in order to repeal the 17th amendment and make balance of power between two offices. i.e. President and Prime Minister as well as to get rid of the controversial 58(2)b. The Committee took nine month to finalize the reforms. Too many hurdles occurred in between. It is not an easy task to make historic consensus among all political parties.

Indeed, there were many differences in the committee but only a few dissent notes were written in the final document; most of the issues were resolved during discussion in the committee under the able leadership of senator Raza Rabbani.

Only one key issue which arose (by PML-N on renaming of the NWFP) very late only two days before the finalization of the reforms; however, all representation showed a broad vision and solved all issues with the consensuses.

I would like to appreciate Senator Raza Rabbani for the historic achievement. The credit also goes to collective wisdom of political parties across the aisle for showing positive approach, no doubt it was a controversial and difficult task.

Congratulation to all members of the committee and all nation for repealing of the 17th amendment. Despite various political and ethnic differences among political parties, they kept integrity and proved that for the sake and betterment of the nation, all politicians are united.

Long live democracy, long live all politicians. Down with enemies of democracy and the agents of dark forces.

Click here to post a comment
Some facts about Nawaz Sharif’s media team and their salaries
Good riddance, Anwar Mansoor Khan, and some suggestions for the new Attorney General – by Honest People and Sarah Khan