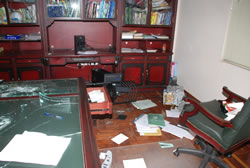 Iftikhar is also the chairman of the PU disciplinary committee, and the university administration has alleged that students recently expelled and rusticated are responsible for the assaults.

On March 31, the PU disciplinary committee either expelled or rusticated six students for “rowdy behaviour”. Those against whom action was taken have been identified as BS Honours student Hafiz Qasim, MSc Geography student Malik Tariq, BS Applied Geology student Saqibur Rehman and B Com Honours students Hafiz Wajid Ali, Mamoonur Rehman and Rehan Khan. Addressing reporters, PU Vice Chancellor Dr Mujahid Kamran condemned the assaults, and called on the chief minister to take action against the IJT for its “illegal activities on the campus”. He said IJT members were always a hurdle in the way of disciplining the institution.

“The assaults mark the darkest day in the history of the university,” said Kamran. He said several cases had been registered against IJT students, but police “have their limitations”. Asked to elaborate, he said the government and police already had their plate full with terrorism, and “such matters fail to get their proper attention”.

He said the university administration expelled such “troublemakers … but they take refuge in university hostels”. Kamran said a group of “15 armed students” had put up at various hostels, and “coincidentally, all of them belong to the IJT”. Asked why PU security guards did not take action, the vice chancellor said guards were scattered all over the campus. “Moreover, action against armed students is the responsibility of police.”

Academic Staff Association President Mehar Saeed Akhtar, also a member of the JI, condemned the assaults, and announced a strike for an indefinite period. He said the faculty would not resume duties unless proper action was taken against “those responsible for the assaults”. He said the general body of the staff association would meet today (Friday) to make further plans. He alleged that “M Ashraf, Aurangzeb, Irfan Anjum, Haris, Salmaan Butt and Rehan Tariq” were responsible for the attack. He said an FIR would be registered against the suspects as soon as a medico-legal certificate was issued.

IJT Information Secretary Hannan Nafees claimed the IJT was not involved in the assaults, and said the “IJT rather condemns the assaults”. He said the expelled and rusticated students initially blocked Canal Road. “Taking notice of the situation, SP Sohail Sukhera cleared the road with the help of the IJT university nazim. Later, the students went to meet the vice chancellor, but stormed his office when they saw he was not there. They went on to see Professor Iftikhar … a heated argument preceded the assault on the college principal.” He said while the expulsions and rustications were “controversial”, the IJT would support the professor.

A large number of students from various departments also demonstrated against the assault on the professor. They were chanting slogans against the IJT. “We will boycott classes today (Friday) to condemn the brutal attack … an education system where teachers are not given respect cannot work,” one of the protesting students told Daily Times.

Related articles:
Rumpus at the Punjab University – by Qudrat Ullah