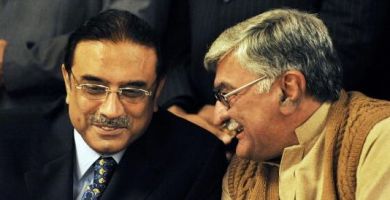 The PCCR met with its chairman Senator Raza Rabbani of Pakistan People’s Party (PPP) in chair to end the deadlock between Pakistan Muslim League-Nawaz (PML-N) and Awami National Party (ANP) on the renaming of NWFP.

The consensus on the new name was announced after hours of discussion in PCCR meeting – following behind-the-curtains contacts between different political forces continued since a deadlock occurred last week on renaming NWFP and criteria for the appointment of judges in the higher judiciary.

Consistent with its democratic and pluralistic agenda, the ruling Pakistan People’s Party is currently puhsing the reform package, which would leave President Asif Ali Zardari, the party chief, largely a figurehead, consistent with a parliamentary style of government. Former military leader Pervez Musharraf had accumulated the powers when he was president.

Renaming the province was included in the package by President Zardari in response to a demand by the Awami National Party, which leads the provincial government in the NWFP.

ANP leaders wanted to call the province “Pakhtoonkhwa” to reflect the Pashtun (or Pakhtoon) ethnicity of three-fourths of its 20 million people. They argued the province’s current name does little more than help people find it on a map, while other Pakistani provinces – Sindh, Baluchistan, and Punjab – have names that match ethnic groups.

The main opposition party, the Pakistan Muslim League-N, said “Pakhtoonkhwa” marginalized other ethnic groups in the province. The opposition party, whose primary strength comes from Punjab province, suggested non-ethnic labels such as “Abaseen” or “Khyber” in what is seen as an attempt for it to shore up its support among its non-Pashtun voter base in NWFP.

The name is still subject to approval by Parliament. Khyber is also the name of a semiautonomous tribal region along the Afghan border that is home to the famed Khyber Pass, a major supply route for material heading to U.S. and NATO forces in Afghanistan.

In Peshawar, the main city in the northwest, residents generally reacted positively to the news.