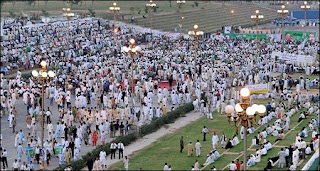 BBC/Times News/Reuters: With less than 45,000 participants including 1,000 lawyers and their assistants (munshis), 3,000 madrassash students and Mullahs, 3,000 activists of Jamaat Islami and its student wing Jamiat, 500 workers of Imran Khan’s PTI, and the remaining participants brought by Pakistan Muslim League-N, the so called Long March proved to be a Short March. It started with humiliatingly low numbers in Karachi, Sukkur and Multan. It created funny scenes such as the Jamiat students beating up the pro-Imran Khan SAC students in Lahore and ended up with an ugly show of noise and indecency by a few thousand activists in Islamabd. Actually the crowd was so uncivilised and unruly that they also tried to beat their own leader Aitzaz Ahsan who was rescued by police. Here is a picture which shows that the total number of participants in the so called Long March was less than 45,000, a figure not even one tenth the claim of 5 lac made by Mr Aitzaz Ahsan.

Lawyers hold a rally in front of Islamabad’s presidential palace

Pakistani ex-PM Nawaz Sharif has denounced President Pervez Musharraf at a rally demanding the restoration of an independent judiciary.

Arriving during the night at the protest in Islamabad, he told thousands of lawyers and activists that Mr Musharraf must be held “accountable”.

President Musharraf sacked the chief justice and about 60 other judges last November under emergency rule.

Hundreds of buses brought protesters close to parliament in the capital.

They arrived at 0200 on Saturday (2000 GMT Friday) and crowds have been milling close to the floodlit building to hear speeches by Mr Sharif and others.

Mr Sharif, who is in the new coalition government, has pulled his ministers out of the cabinet in protest at the government’s failure to keep its promise to restore them to office.

On Saturday, he turned his anger towards Mr Musharraf as some in the crowd, numbering at least 15,000, chanted “Hang Musharraf!”.
……

Some lawyers continue sit-in in Islamabad (The News)

The Long March has left many questions unanswered…
My choice today: Saturday 14 June 2008