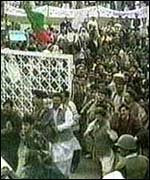 The trial of Pakistan’s Prime Minister, Nawaz Sharif, has been halted after his supporters forced their way into the Supreme Court building in Islamabad

Protesters shouted abuse against the Chief Justice, Sajjad Ali Shah, who was hearing a case of contempt of court, which could lead to the Prime Minister’s disqualification if he is found guilty. The court adjourned for the day.

The protest is the latest twist in the country’s constitutional crisis, which started over the appointment of five new judges to the Supreme Court.

Mr Ali Shah charged Mr Sharif with contempt after his outspoken criticism of the candidates. Mr Sharif responded by trying to remove him from office.

The two men are under considerable pressure from the country’s powerful armed forces to resolve the situation constitutionally.

Mr Ali Shah’s position in the court has become increasingly uncertain after an internal struggle emerged in the Supreme Court over his status. Four of his fellow judges in two separate hearings ruled he was suspended from office because he was not the most senior judge when he was appointed.

Friday’s trouble started when one of Mr Sharif’s Members of Parliament climbed over the gates in front of the court to get inside.

A crowd of a few hundred party supporters then began to follow him and, as the police and the security forces in riot gear stood by and did nothing, they pushed open the gates and ran into the court compound.

A few members of the crowd got into the court building and ran to windows and onto the roof of the entrance, chanting slogans against the Chief Justice.

Amid the commotion a court official ran to the courtroom and said the Chief Justice was in danger. The judges immediately adjourned proceedings and left the room.

The attack on the Supreme Court

Pakistan grappled with its worst-ever constitutional crisis when an unruly mob stormed into the supreme court, forcing Chief Justice Sajjad Ali Shah to adjourn the contempt of court case against Prime Minister Nawaz Sharif. Hundreds of Pakistan Muslim League supporters and members of its youth wing, the Muslim Students Front (MSF), breached the police cordon around the courthouse when defence lawyer S.M. Zafar was arguing his case.

A journalist rushed into the courtroom and warned the bench of an impending attack. Whereupon, the chief justice got up abruptly, thanked Zafar and adjourned the hearing. While judicial members left the courtroom soon after, the mob entered it shouting slogans, and damaged furniture.

The unruly mob, led by ruling party member from Punjab Sardar Naseem and Colonel (retired) Mushtaq Tahir Kheli, Sharif’s political secretary, chanted slogans against the chief justice. The mob also beat up Pakistan Peoples Party senator Iqbal Haider. The police managed to restore normalcy after baton charging and teargassing the mob, both inside and outside the courthouse. The court which assembled at 9:45 a.m., could continue the proceedings for only about 45 minutes.