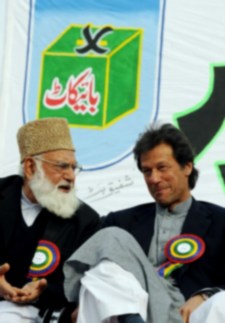 In his recent interview with an Australian News Agency, Imran Khan claimed that cricketers would never be under any threat from terrorists…Terrorists rely on support from the masses because that’s where they get their recruits, and cricket is a game which is so loved and there’s such passion in Pakistan, that the terrorists know that if a cricket match is bombed, they’ve had it. “The public will just turn against them.”

Back in Pakistan, Imran Khan never terms Taliban and Al-Qaeda as terrorists. He usually justifies terrorist activities as legitimate acts of resistance against the ‘atrocities of Pakistani and NATO forces’. However, as usual, he had two different faces and messages for his audience in Pakistan and abroad. He suggests that the public will turn against terrorists (who? Taliban?) if they attacked cricketers. However, what about the attacks on the Islamabad Marriott Hotel, tribal jirgah in Orakzai, suicide attacks on Asfandyar Wali Khan and also on a Shiite MNA in Bhakkar? Did Imran Khan ever clearly and categorically condemn those acts of terror, without justifying them as a reaction to “Pakistan’s wrong policies on the war on terror”? Shame on you, Imran Khan.

More than 1300 people have been killed this year in a string of bombings by insurgents, including last month’s destruction of the Marriott hotel in Islamabad, which killed 60, and Thursday’s attack on the heavily fortified headquarters of the anti-terrorist squad in the same city.

Within a month of Imran Khan’s guarantee / prophecy that Taliban beasts will spare sports from their acts of terror, look what happened:

10 November 2008: Suicide attack at the main gate of Qayum Stadium after the closing ceremony of inter-provincial games kills three in Peshawar: Bilour was the target; Taliban accept the responsibility…

CRICKETING great Imran Khan says Australia’s team will never be under any threat from terrorists in his homeland of Pakistan.

Australia has not toured the troubled nation for a decade, abandoning a tour earlier this year because of security concerns before being one of four nations that effectively forced the postponement of last month’s Champions Trophy tournament.

But Khan said terrorists couldn’t afford to target Ricky Ponting’s men because the backlash from the Pakistani public would be too great.

“I can understand that (the tour cancellation), but having said that I also know that cricketers would never be under any threat from terrorists,” the politician told ABC Television’s Enough Rope program.

“Terrorists rely on support from the masses because that’s where they get their recruits, and cricket is a game which is so loved and there’s such passion in Pakistan, that the terrorists know that if a cricket match is bombed, they’ve had it.

“The public will just turn against them.”

Khan is a much-loved figure in Pakistan for his exploits on the cricketing field which included leading the national team to the 1992 World Cup title.

Since retirement he has founded the Movement for Justice political party and served for more than five years as an elected politician.

The International Cricket Council (ICC) hopes to reschedule the Champions Trophy for late 2009 in Pakistan while Australia’s Test tour of the nation, which is slated for next year, remains up in the air.

Mohammaed Hanif: “This is our Mumbai” – Imran Khan’s comments on the terrorist attacks on Sri Lankan cricket team…

Is he actually daring the terrorists to do it? They have no qualms in bombing schools and abducting students, to cricketers kis khet ki mooli hain.

Is he trying to give them new ideas to target people?

As for the terrorists, theirs is not a campaign to win hearts and minds. Public opinion doesn’t figure into their thinking, they have gone way beyond that. It is, pure and simple, a terror campaign, to silence any opposition, to scare people into submitting.

Imran Khan has lost the pulse of the people, whose opinions have shifted from that a year ago. He should see that the tide is changing, and form a new opinion on this crisis.

Many cried for the Lal masjid, but that time is now over. If you were a supporter or an opponent of the Lal masjid attack, it doesn’t matter any more. Now is the time to unite and fight this menace.

Wether you are religious, or not. Political or not. Fundamentalist or secularist. We are in this together now. The salvation of our country, country-men and the freedom of our religion (islam is more free to be preached and practiced in Pakistan than any other nation on earth) depends on it.

Much as I admire Imran Khan as a cricketer and politician, I hope this statement doesn’t come back to haunt him…

Acha ha they didnt come. No wonder what might happen. I agree with darkstar that they are targeting places such as schools, military posts and important infrastructure, Crickters kis kheat ki mulli hain. Its better not to host rather then if someone gets hurt or God for bid gets killed. We wont be able to sustain that.

Vinod India is brought in because just before the tour, blast hit India too, yet they chose to continue with the tour where as it was much much before the marriot hotel blast they refused to come to Pakistan. So definately the emotional nation felt degraded which i think was wrong, every country should be seen in its context. Maybe to Australians India was more safe then Pakistan, after all its their decision and we cant force and should not force someone if he feels uncomfortable inside Pakistan to tour Pakistan.

We need to set a few things in order so that others dont get the excuse not to tour Pakistan.

“The terrorists know that if a cricket match is bombed, they’ve had it. The public will just turn against them,” he added.”

So Imran Khan Saheb, you think terrorists haven’t HAD IT? After bombing and killing hundreds of innocent civilians? Are you implying that public should not turn against them because they haven’t bombed cricketers?

Instead of denouncing these terrorists OPENLY, you sound apologetic for them, Imran Khan Saheb.