LAHORE: Secretary Information Tehrik-e-Insaaf Umar Sarfaraz Cheema said the government will be held responsible if it tried to disrupt long march and added people of Pakistan will hold government accountable for the results of long march.

He was talking to mediamen in Lahore. He said we will be compelled to lift weapons like Molvi Fazlullah in case lawyers and political parties were forbidden to hold peaceful protest.

He vowed, on behalf of his party, to extend all out support to lawyers for making their movement successful as he regarded the movement was seeking independence for judiciary instead of restoration of deposed Chief Justice Iftikhar Muhammad Chaudhry.

He announced to hold a national conference soon with the help of other political parties. Meanwhile, he deplored the heinous murder of Geo News reporter Musa Khan Khel in Swat and demanded government to book culprits to justice at all costs.

Imran Khan, the leader of the Pakistan Tehrik-e-Insaf, or the Pakistan Movement for Justice, called for the government to allow for sharia law not just in the tribal areas and the northwest, but throughout the country. Khan and his party are considered moderate by some observers of Pakistan.

NOWSHERA: Pakistan Tehrik-e-Insaf (PTI) Chairman Imran Khan Saturday said he would himself visit Swat to hold talks with Taliban to bring a lasting peace to the region. He said that he has directed his party leaders to initiate parleys with the Taliban in Swat to settle the issue forever. In his speech to lawyers of Swat in Sheikh Maltoon Town, Mardan, internally displaced persons of Bajaur Agency in Jalozai camp and a press conference at the residence of PF-14, Nowshera PTI president Kifayatullah, Imran urged the government to immediately implement Shariah in Swat and halt military operation there, tribal areas and elsewhere in the country. PTI district president Riasat Sarhadi, provincial chief Asad Qaiser, Aftab Ahmed Advocate, president PTI Swat and others were also present on the occasion. “The government must devise new policy to safeguard the interest of Pakistan rather than the US in the region,” the PTI chief said, adding that demand of Swat people should be fulfilled by enforcing Shariah. He criticised the federal government for its lukewarm attitude to take prompt steps for resolution of crises being faced by the displaced people of Swat and tribal areas. He advised the government to hold talks with Taliban to bring a lasting peace to the region. “On one hand the government is carrying out drone attacks on its own people while shedding crocodile tears on the other,” Imran alleged, making a reference to the disclosure of a US Senator Dianne Feinstin. It may be mentioned that the US lawmaker has claimed that CIA’s unmanned predator aircraft striking militants targets in tribal areas are flown from an airbase inside Pakistan. Later, Imran addressed a big gathering of IDPs from Bajaur Agency in Jalozai camp and assured them of their full support. He said that a campaign for collection of contribution for the IDPs would be launched to help the affected people.

By Ghost of TK:

Pakistan Tehreek Islami Threatens to take up arms “like maolvi Fuzz-Lulla” against the government if any hurdles are put before the long march.

I wish PTI would bring out just 50 of their “soorma’s” to fight the triple shit brigade, next time our brave jurnails are robbing the nation of its rightful democratic inheritance (by jumping walls like raccoons in the night). 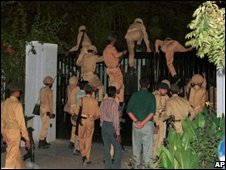 Just 50 men with AK47 … and they will make history. No Jurnail would EVER have the balls to EVER impose martial law EVER AGAIN!

Imran Khan and the ‘liberals’

Imran Khan demands the imposition of shariat in Pakistan

Is Imran Khan the new choice of agencies (ISI) in Pakistan?

Click here to post a comment
Liberal Fascism versus Religious Fascism: An interesting conversation
The ISI forges the Taliban alliance in Waziristan against the war on terror…