A TV documentary worth watching.

It was horrifying to say the least. It seems that brute force alone can’t eliminate these throat-slitting animals. It is an ideology and not restricted to any particular area anymore.

We also need to identify why there are so many vulnerable children out there who can be a target for these radicals? Lack of education and opportunities strikes your mind straight away; and the buck ultimately stops with the sincerity of the civil and military leadership in Pakistan. 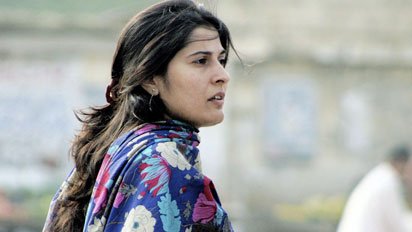 Three hours’ drive north of Pakistan’s capital, Islamabad, the flat highway gives way to the windy roads that weave through the Hindu Kush mountains. At the mouth of the Swat valley lies the town of Qambar. A desolate unmanned police station is the only sign that the government’s writ was once established here.

Further down the road, a middle school for girls is reduced to rubble. There, I meet two nine-year-olds, Ruksar and Zarlash, who want to tell me what happened.

‘It’s completely unfair, our school was destroyed,’ says Zarlash, who believes that she may never fulfill her dream of becoming a doctor.

Both girls lie awake at night listening to mortars fly overhead. Since the Taliban started patrolling their neighborhood, the girls have been forbidden by their parents from going out. They feel trapped.

‘The Taliban walk around with their faces covered. They terrorise the neighborhoods and force us to wear burqas. We are so afraid,’ says Ruksar.

Their father Fazal, an English teacher, is worried about their future. ‘All of the girls in the region are having great injustices done to them. They had big dreams, their education was a beacon of light, now that light is being snatched from them.’

Fazal’s savings are running out because the college he taught at has been closed for months. ‘You’ll find thousands of children in this region who cannot continue their education and will continue to sit at home, unaware of what’s happening in the world around them,’ he tells me.

The valley of Swat in the north of Pakistan was once home to the country’s only ski resort. When the Taliban arrived in 2007, they destroyed it. It was seen as a sign of Pakistan’s ‘western’ past; a place where men and women interacted with each other. That was the first step of their brutal campaign.

Swat, once considered the Switzerland of the East, where Pakistanis spent idyllic summers and winters, is being slowly and systematically destroyed.

In the past two years, the Taliban have blown up over 200 girls’ schools, beheaded 50 government officials, bombed countless police checkpoints, executed women they deemed immoral, publicly lashed those who disobeyed them and cut up the bodies of people they thought were spies, leaving them in the centre of the valley for the residents to see.

By some estimates, the Taliban control more than 70 per cent of the valley. When the Pakistani army began its campaign against the militants in the lawless tribal areas near the Afghan border, many of the militants fled to other areas within the country. Some arrived in Swat and were given refuge by extremist preachers who encouraged the militants to implement their fundamentalist ideology.

Now by some estimates there are as many as 4000 well armed Taliban fighters operating in the valley. What is most frightening about this development is that Swat is not part of Pakistan’s tribal areas, long considered out of the grasp of the government; it is very much part of Pakistan proper.

Four Pakistani army brigades, up to 16,000 soldiers, are deployed in this 200 mile long valley. They are not enough to stop the Taliban. Over 1500 people have been killed here and almost 400,000 have fled their homes in the last 18 months. The army is fighting an enemy that blends in with the locals during the day and attacks at night.

Three weeks after I left, the Pakistani government signed a peace deal with the Taliban. Shariah law now prevails over the valley. Women are forbidden from working, girls colleges are still closed and – more importantly – the Taliban now have a new safe haven from where they can strike into the heart of Pakistan.

Review in The Guardian

It’s not fair. In this country most kids would love their schools to be reduced to piles of rubble by bad men with big guns and big beards. But it never happens. Whereas in northern Pakistan it happens all the time, and the kids are really cross about it. Well, the girls are, but then it’s their schools that are being destroyed. “Education is like a ray of light, and I want that light,” says one little girl, taking the reporter Sharmeen Obaid-Chinoy round the remains of her school in Dispatches: Pakistan’s Taliban Generation (Channel 4). Imagine someone in year seven saying that here. You’d be more likely to get something along the lines of: “Education? Yeah, wha’ever.”

The Taliban are pulling down the girls’ schools because, they say, that’s what God wants. God doesn’t like rays of light apparently, so he’s turning them off all over the north of the country. The Taliban don’t mind the boys going to school, but what they really like is for them to go to their own special Taliban schools. Double indoctrination followed by hatred-incitation and, after lunch, a practical lesson in suicide bombing. It’s giving me an idea for a new reality show: Taliban Boot Camp … no, maybe not.

It’s miserable for everyone. The Taliban put the fear of God into the people who don’t back them. They live in constant terror, for their freedom and their lives. The Pakistani army gets jittery and flattens entire towns. People move into refugee camps and the world forgets about them. And unmanned US planes fly bravely overhead dropping Hellfire missiles. Some hit people who are Taliban; others hit people who aren’t, but are then – if they survive – much more likely to become Taliban.

And the kids get mixed up in it all. In one refugee camp, two boys, best mates, have split loyalties. One says he will join the army, the other the Taliban, and though they are friends today and hold hands walking around the camp, they say they will kill each other if needs be. It puts the Arsenal-Tottenham divisions at my school into perspective.

In a hospital in Peshawar, a 10-year-old girl embroiders something and tells how her entire family was wiped out in a mortar attack. She wants to be a doctor when she grows up. They’re on a higher level, these Pakistani girls, though I do like her reason for wanting to join the medical profession. “So I can give injections to people.”

I don’t know what Sharmeen Obaid-Chinoy wanted to be when she was a 10-year-old girl growing up in Karachi, but she ended up as a journalist, and bloody good at it she is too. It’s shocking really, that someone who sits on a sofa and watches telly for a living is also allowed to call himself a journalist, while she’s out there telling it like it is.

It’s very dangerous for her, as the Taliban aren’t big fans of reporters, and have been known to kidnap and kill them – because that’s what God wants, obviously. He also approves of kids getting involved, according to a Taliban leader and executioner interviewed by Obaid-Chinoy in Karachi. “God is happy when children go and fight,” he tells her.

To learn more about the context and the current situation in Swat, you may like to read the following articles:

How honest and objective is Pakistan’s media? A small comparison of Daily The News and The New York Times
Benazir Bhutto: Mein Baghi Hoon – I am a rebel