I am writing this post in support of an unsung hero, Constable Khalil, a 26-year-old police constable who was abducted by the Punjab Rangers personnel on Wednesday (24 March 2010), while he was on duty at Lahore’s Liberty Market.

Khaleel was publicly thrashed and abducted by Rangers after he stopped a young man who was entering the parking from the wrong end, and parked his car in a no-parking zone. 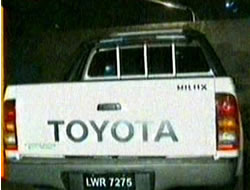 Police personnel have confirmed that the young man, who was later identified as Imran Ali, the son of Pakistan Rangers Punjab Director General Yaqoob Ali Khan, summoned 10 Rangers personnel to the spot, who proceeded to publicly assault the constable and ‘kidnapped’ him in a white Rangers van.

It was reported that Imran, along with another youth, came to the Liberty Market and parked his vehicle bearing number (ADS-707) in the no-parking zone. Khalil, a Gulberg police constable deployed there, requested Imran to park his vehicle in the parking lot.

Imran considered the constable’s request an insult. He abused the constable and also summoned Rangers Jawans. The youth told the constable that he was the son of the DG Punjab Rangers and that Jawans were on their way to teach him a lesson.

A traffic warden standing a few yards away alerted the police. He informed the police that some armed men belonging to the Punjab Rangers had thrashed the constable and kidnapped him.

Gulberg Police investigators said they had arrested two Rangers officials, including a driver and a sub-inspector. “They have confessed that the Rangers deputy superintendent had ordered them to pick up the constable ‘who dared to stop the son of the Pakistan Rangers Punjab DG’,” the investigators said, adding that according to Rangers officers, the constable had been shifted to the Rangers Headquarters and was locked up there.

Meanwhile, the Gulberg police have registered a case against 10 unidentified men under Sections 365, 186, 353, 148, 149 PPC on the complaint of Gulberg SHO Ahsan Ashraf. Khalil was however kept in illegal detention for almost 48 hours.

LAHORE: Police constable Khalil, who was abducted by the rangers, was brought before media here on Friday, 26 March. SSP Model Town Rana Hayat told media that Rangers Officials gave the custody (??) of Khalil to police in the Cantonment area.

On this occasion, SSP Model Town said that the police was yet to receive his (Khalil) official uniform.

To a question, he said the press release issued by the Punjab Government was the stance of provincial government. The SSP said that statements of Constable Khalil and other concerned people would be made public soon.

Will the Chief Justice of Pakistan consider spending some time on the accountability of army officers once he gets a free moment from bad mouthing against politicians and elected members of the parliament.

The following are some of the laws which My Lord may consider implementing in order to protect the honour and job of our unsung hero, Constable Khalil, and to punish the culprits in Pakistan Army starting from the Director General of Punjab Rangers in this instance. Of course the following list is in addition to the charges filed against the culprits under Sections 365, 186, 353, 148, 149 PPC.

Issuance of a writ is an exercise of an extraordinary jurisdiction of the superior courts in Pakistan. A writ of habeas corpus may be issued by any High Court of a province in Pakistan. Article 99 of the 1973 Constitution of the Islamic Republic of Pakistan, specifically provides for the issuance of a writ of habeas corpus, empowering the courts to exercise this prerogative:

Article 199. Jurisdiction of High Court.—Subject to the Constitution, a High Court may, if it is satisfied that no other adequate remedy is provided by law:

….on the application of any person, make an order – that a person in custody within the territorial jurisdiction of the Court be brought before it so that the Court may satisfy itself that he is not being held in custody without lawful authority or in an unlawful manner;…

The hallmark of extraordinary constitutional jurisdiction is to keep various functionaries of State within the ambit of their authority. Once a High Court has assumed jurisdiction to adjudicate the matter before it, justiciability of the issue raised before it is beyond question.

The Supreme Court of Pakistan has stated clearly that the use of words “in an unlawful manner” implies that the court may examine, if a statute has allowed such detention, whether it was a colorable exercise of the power of authority.[1] Thus, the court can examine the mala fides of the action taken.

In another leading case,[2] the Supreme Court stated that in exercising constitutional jurisdiction relating to a detention, the court was under an unconditional duty to satisfy itself with regard to the lawfulness of authority of detention and the manner of detention. The scope of the inquiry is not in any way fettered by any rules of procedure of the write of habeas corpus. Once the attention of the court is properly drawn to a case of detention, the onus immediately shifts to the detaining authority to show the lawfulness of its authority in detaining the detainee. The duties, therefore, are specifically that of the court and the detaining authority. The applicant may come to the forefront in such situations incidentally.

3. Nepotism, corruption and abuse of authority

Sec 3 Application Whole of Pakistan / all persons in Pakistan including FATA/ PATA.

Sec 9 Corruption and Corrupt Practices Committed by holder of public office or any other person is cognizable under NAB Ordinance,1999