Obama should apologise for Salala: Bilawal

NEW YORK: Pakistan Peoples Party’s (PPP) Chairman Bilawal Bhutto Zardari said on Tuesday that he was visiting America to normalise the ties between United States and Pakistan but added that US President Barack Obama should apologise to Pakistan for the attack on the Salala check post, DawnNews reported.

Speaking at a gathering in New York, Bilawal said that drone attacks were a violation of Pakistan’s sovereignty.

The US has still not apologised to the government and citizens of Pakistan over the Salala attack, he said.

Bilawal said Obama should apologise to the people of Pakistan over the attack on the check post. He moreover said that Pakistan-US relations were at a critical juncture.
Source: Dawn

Obama has brief encounter with Pakistan’s president on the sidelines of a large group meeting at NATO summit
Mon May 21, 2012

CHICAGO (Reuters) – President Barack Obama spoke briefly with President Asif Ali Zardari of Pakistan on Monday but the leaders did not hold an individual meeting during the NATO summit in Chicago as there was still no deal under which Pakistan would reopen its supply routes for NATO soldiers in Afghanistan.

At a press conference later, Obama said the U.S. and Pakistan were making “diligent progress” on the supply line dispute, but indicated a deal had not been clinched. He acknowledged “real challenges” in relations with Pakistan.

Zardari was a last-minute addition to the list of leaders at the summit that Obama hosted in his home town of Chicago.

The Pakistani leader met on Sunday with U.S. Secretary of State Hillary Clinton, but U.S. officials said there were no plans for a meeting with Obama.

The brief encounter between Obama and Zardari, which took place in the presence of Afghan President Hamid Karzai, may allow Zardari to avoid appearing as if he was snubbed by Obama.

U.S. and Pakistani officials have said they are confident they can reach a deal to reopen the supply lines, but it appeared unlikely that an announcement would at the NATO summit.

Zardari also shook hands with Obama earlier in the day.

No formal meeting with Pakistan President

Hopes for a meeting on the sidelines of the NATO summit bringing together the U.S., Afghan and Pakistani presidents appear to have dimmed, and analysts say this is due to the lack of a full agreement with Pakistan on reopening NATO supply lines into Afghanistan.

President Barack Obama met on Sunday in Chicago with Afghan President Hamid Karzai, but his schedule includes no one-on-one interaction with Pakistan’s President Asif Ali Zardari, and White House staff say the schedule is not expected to change. 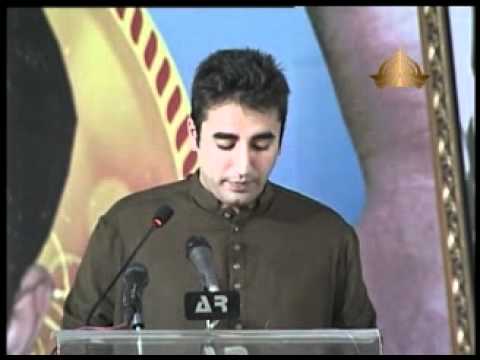 NEW YORK, May 22 (APP): Following is the text of the speech by Chairman of the Pakistan People’s Party, Bilawal Bhutto Zardari, while addressing PPP workers and support in New York on Monday night:

I have traveled to America at what may be the most critical point in the 65 year relationship between Pakistan and the United States.For one year our countries have weathered a series of crises that have tested our partnership.

The unilateral action in Abbottabad made many in Pakistan question whether the United States actually considered Pakistan a military ally in our common war on terrorism and extremism.

The Raymond Davis fiasco made many in our country question the roe and authority of CIA activities in Pakistan.

The continuing unilateral US drone attacks on Pakistani soil was a constant irritant to Pakistani public opinion. — both as a clear violation of our sovereignty and the toll of collateral damage to innocent victims. These illegal strikes, that violate international law and even the US’s war powers act, must end.

And possibly most egregiously the NATO attack which left 24 Pakistani soldiers dead at Salala has not resulted in an apology to the families or to our nation.

I would like the American public to consider what their reaction would have been if American troops had been killed in such an attack on their border with Mexico. I urge President Obama to show some courage. I understand he is running for reelection but if he is the same man who inspired the world with his message of hope and change the future of NATO mission in Afghanistan should be more important than poll numbers.

It is ludicrous to keep demanding Pakistan do more under these circumstances. Over 4,000 Pakistani troops have been martyred in this war. That is more than all NATO forces combined.

It is time for the US to do more.