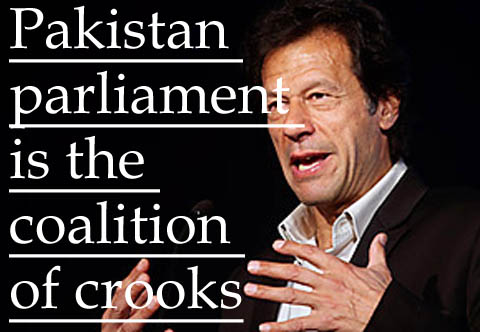 After all, I am not self-made and do not have job in Hazrat Imran Khan foundation. I am not self made and uncompromised like Honourable Justice Asif Saeed Khosa, Hon. Justice Khalil Ramday and His Holiness Highness Iftikhar Chaudhary. These pious judges have no relatives in positions of power and they rose through the ranks without EVER compromising anything and on pure merit. I do not posses this type of merit.

I need sifarish (contacts) to get a job and if my Mummy-Daddy Uncle-Aunty were in some big company, then perhaps. But I am happy.

My association with Jamaat-e-Islami and Sipah-e-Sahaba has served me well and now when Bank of Punjab bothers me to give them back Rs. 5 billion which they call loan, I tell them to bugger off and critisize the imperialist banking system that provided loans on Riba. I tell them unless they don’t give me Rs. 10 bn of Islamic Banking instruments, nothing doing hain ji! If they bother further, I request my friends from LeJ and JuD to ahem, tell the Rafzi and Qadian managers of the bank to take a hike, Varna……… If all else fails, Justice Hazrat Honorable Khosa is always there to shame the bank with poetry and shift the focus on to Bhutto Zardari Party (BZP)

I invest Rs. 2 bn in some factories and the rest Rs. 3 billion are in Islamic financial instruments in pious Marxist Gulf countries; which provide a simple man like me enough monthly profit to get by. Nothing too flashy. I am a ‘umble chap with some spare time who loves to come to the aid of anyone defending Hazrat Imran Khan, Hazrat Hafiz Saeed and Taliban. Unlike you, who hardly sends any email to this list, I know I waste great time in sending 2-3 emails per fortnight but I appreciate lectures by Dr. Haider Shah, Raza Raja and yourself on time management, sleep deprivation and selectiveness.

Also, my factories have benefited 3,000,000,000,000 people which includes Pathan chowkidars whom I have civilized by offering generous wages to these savages at Rs. 3000 per month. After all, as HIK said, there is man and then there is Pathan. Last week, I had gone hunting in interior Sindh and after killing some houbara Busterds, We were in Ghotki district and there was no one from BZP there on May 12. Everyone in BZP these days is shooting crack cocaine and listening to the “Grateful Dead” at the PM house in Islamabad – cocaine that is processed in the basement of the Gilani residence in Multan and distributed by Aitzaz Ahsan to liberal fascist outside the Supreme Court premises. This all told to me by my friends in the right places and we know that THEY never lie.

Also, never let the “liberal scum” “Uncle Toms” like Nafees (real name of this CIA agent is Ned Kelly) confuse you with Zionist tactics like standards and consistency. These Zionist tactics are meant to dull the brilliance of ghairatmands like us. Look at how they attack brilliant advocate of Pakistaniant and defender of Taliban, Ansar Abbasi ( Ansar Abbasi’s bachay ki dua, https://lubpak.net/archives/76998)

See also: “David is absolutely correct. Pakistan (ably assisted by the CIA and the Saudis at critical early points, but always one step ahead of their paymasters when it came to ideas..meaning the fashionable Western academic leftie notion of CIA creating the monster is also bullcrap…CIA helped, but the monster was ready and willing and well ahead of his teachers when it came to ideology and worldview) or rather, Pakistan’s security establishment, has been nurturing a proxy force that is absolutely incompatible with peaceful coexistence at home or abroad.”, http://www.brownpundits.com/david-ignatius-is-beginning-to-get-it/

PTI-ASWJ-DPC lovers must keep doing what they are doing. It has won the day. Whenever liberal fascists critisize the Taliban, talk of the imperialism of Neocon Capitalist pigs! If they continue, make the Taliban out as US agents. Don’t worry, most people will never ask the question that if the Taliban are US agents, why don’t ghairatmands protest against the Taliban. You see this can also be explained away as “politics”. If some of them ask this question, label them as “Uncle Toms” and capitalist-neocon-imperialist pigs. Sprinkle with as many quotes from comrade Tariq Ali and Noor Chacha (Noam Chomsky). You will be fine.

Click here to post a comment
Famous poet and critic Dr. Shabih-ul-Hasan murdered by ASWJ-SSP terrorists in Lahore
There is no evidence against Hafiz Saeed – by Riaz Malik Hajjaji