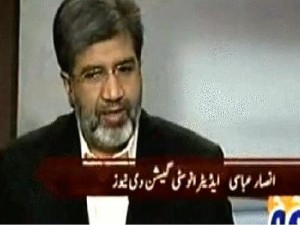 In his incomparable poem, “Bachay ki dua” or a “Child’s supplication”, (Baang-e-Dara)  Iqbal presented in 12 lines what should be the mission of any child from his early life. We have read this poem all our lives and without doubt, it is one of the simplest, yet best, poem written by Iqbal.

Ansar Abbasi, the apex investigative editor of The News, known for his vitriol against the democratic dispensation and wish for a Taliban style of “Gavernance” in Pakistan, has been at the forefront of running a campaign against the PPP along with his gang members like Ahmed Noorani, Umar Cheema, Usman Manzoor from his newspaper and sister TV channel. It is also speculated that he has roots with banned outfits like Hizbut Tahrir and there is empirical evidence that he supports the cause of all Jihadi outfits.  In his weekly article in Daily Jang, which appears on Monday, he tries to act like a “God Fearing” social reformer as he knows that Jang’s readership is tilted towards the right wing. Whether he is one, only Allah knows, but his writings do not reflect that!

His article on May 14, 2012, is titled “Meray liye Allah hee kaafi hay” which is the urdu translation of a Quranic verse “Hasbi Allah wa ni’mal wakil”. In his article, Ansar Abbasi has recounted the threats he has received and all the conspiracies, threats, abuses that has endured in the last many years because he considers Journalist as an “Ibadat”. His “Ibadat” is that he keeps a watchful eye in “public interest” on governments of the day. He even mentions that in his career it is “quite possible that his information is inaccurate, his sources may be tainted, my analysis can be wrong, but he never writes because of ill-will and personal interest”. He even has to write that “Rizq is something that Allah provides and that despite of all the efforts to stop his Rizq, he is committed because he has faith in Allah!”.

Now let us ask Mr. Ansar Abbasi, if Rizq is provided to you by Allah, then who provides Rizq to all those against whom you write and speak? If you believe that you are doing a mission, then those against whom you write and speak also believe that they have a mission to complete, don’t they? If you believe that for you “Allah is enough” then this is what others also believe. In essence, what kind of an article is this? come out of this love for yourself. As they say “Apnay baray mayn khush fahmi aur doosron kay baray mayn gahalat fahmi” destroys a person and so it seems that Ansar Abbasi is now using a public forum to prove that his “Intention is always right” and that he is a good man!

Ansar Abbasi should recite Allama Iqbal’s Bachay Kee Dua every day. Hopefully, he will improve because with his “good intentions” he is supporting the cause of Taliban and the Jihadi extremists who are trying their best to destroy our nation and send us into dark ages. Remember, “Zalim ka saath denay wala bhee Zalim hay!”