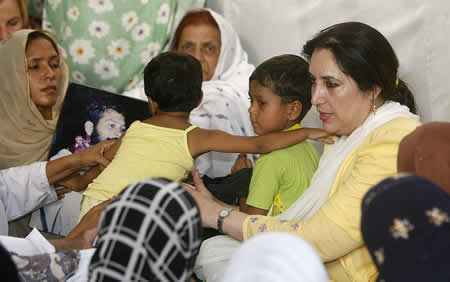 “If the whole world were put into one scale, and my mother in the other, the whole world would kick the beam.” While having scrutiny on mothers’ fidelity, the only conception I perceived, is the streak of sacrifices. Notwithstanding, each mother endures for her own descendants but I know one, who forfeited every single thing to run the wheel of fortune of other mother’s children. Who, in this era of self-centeredness, forgetting herself, had always given precedence to the nation. That is the chivalrous lady, whom even death could not scare…

“We are prepared to risk our lives. We are prepared to risk our liberty. But we’re not prepared to surrender this great nation to militants.” Benazir Bhutto – The name that needs no introduction, nor all the vocabularies can be enough to describe it. She might be the sister to several; daughter to numerous, but to me, she is my spiritual mother. The mother, who laid down her life to guard the lives of billions from tyranny, by taking a ‘BULLET’, so that in future, children, like me, don’t have to. Known for her self-immolation and altruism, Benazir Bhutto emerged as the mother of all infants, vanquishing two military coups and all the rivals – within and outside. The iconic mother, who, despite being incarcerated for the crimes she never committed; imprisoned in the wall-less cells where her sensitive skin had split and peeled; highly coerced by the intensified pressure of tyrants – ‘as brutal as Hitler’; struggled against the military wings. Looking into the eyes of death, she never feared because of her belief: “Life and death are in the hands of Allah”.

Alas, I do not have my ‘heroic mother’ with me, physically. Nevertheless, this is not Benazir’s termination but the continuation of her stupendous cause and the essence of many people’s life, including me. Albeit I had never met nor seen her, which will always be the most terrible truth of my life, but I know her from the very first day of her return from the exile in Oct; 2007. Maybe I could not get any chance to know about her during her span of existence, nevertheless, she gave me the sole purpose of life via her teachings. I have heard from many that: there are two mothers – one who delivers and the other who raises. Similarly, I have been blessed with two, the one who brought me into this world; taught me to walk and stand on my own feet, and the other is Bibi Shaheed, whose life has taught me HOW TO LIVE. She brought up the country, where I live, by taking it to those heights where only the stars can be. Her incessant sacrifices made me to conceive what are we here for!

No one in this world can be flawless but mother is the one that we portray as being perfect. Therefore, it is insurmountable to appraise mother’s love and so cannot I. Bibi used to consider the children of Pakistan as her own and so, dedicated her book ‘daughter of the east’ to Bilawal, Bakhtawar, Aseefa and all of us. To angle for our secure future, she returned to Pakistan when she could live in abroad for the better future of her family, but she did not, because a mother herself can bear all the afflictions but can never see her children in anguish, no where – such a tremendous illustration of motherly love can be found. She arrived at her Greenland – Pakistan, as a gleam of hope at the bout when people were trapped between soldiers and suicide bombers. Being an unflinching leader, she fought selflessly against dictatorship, extremism, injustice, poverty and all the predicaments faced by this nation. Once she had said… “Despite threats of death, I will not acquiesce to tyranny, but rather lead the fight against it.” Here is her fortitude and determination – The determination to brighten our future. Being threatened for many times, she had never let anyone intimidate her. Running against the clock, she delivered too much that I wonder what she could have done if she had lived… If prison cells, exiles, tortures could not frighten her then how could the death? This is the acumen that despite being departed physically, Benazir is all around – holding our fingers and nurturing us to take the very first steps; grasping our back so that we do not fall while learning to stand on our own feet; making us feel her existence…

“To the world, she was an icon. To me, she was my mother.” These might be the words of Bilawal, but voice of each child of Pakistan, who

has been in cordial touch with the meritorious woman – Shaheed Benazir. After losing mother, abysmal loneliness becomes one’s fate and so it became ours. Nevertheless, I feel much repose while thinking about the place she would be living in – The ‘JANNAH’, the place of which every Muslim yearns. “My mother died fighting for a Peaceful, Prosperous and Progressive Pakistan. I will never give up on my mother’s Pakistan. I will never give up on the woman who sacrificed herself so Pakistan could be free…” Bilawal would never give up and so never we, because we cannot let her blood waste. We will not give up and will struggle along with Bilawal, Bakhtawar and Aseefa, until we have a BENAZIR PAKISTAN. Following BiBi Shaheed’s footsteps, we will combat against all the upheavals and forfeit everything to bring out the revolutions to change this country, because revolutions always need enormous sacrifices.

Though all days are for and of mothers but MOTHER’S DAY is the one on which, we mostly say what we fail to say the whole year and so I am trying to express all that I feel for my spiritual mother. She has given me a space to discover who I am and her teachings have clung to me all my life… The ribbons of her love are woven around my heart. Therefore, all that I am, or hope to be, I owe to Allah and both my mothers, who have been playing the vital roles in my life. I salute BiBi Shaheed and can never forget her because mothers hold their children’s hands for a short while, but their hearts forever. I promise to put each effort in actualizing the dreams that she had seen for us. OUR PAIN HAS NOT BEEN IN VAIN. . .