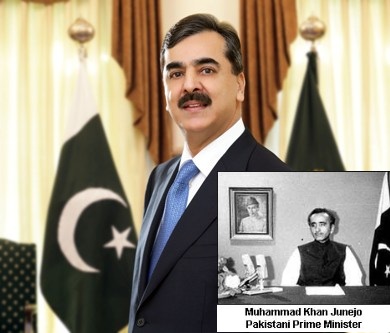 Although our history is full of many embarrassing moments which bow our heads down as a nation, but there are TWO such disgraceful incidents that have thrown us into the depths of humiliation.

No. 1 when an Ex-Prime Minister, Muhammad Khan Junejo, was toppled down as soon as he landed from a successful visit of various countries and sent home, even not allowed to convey his tour’s updates to his office. Such a shameful act with the Chief Executive of a country had never been witnessed. It could have been done after a few days if it was so necessary, but the vindictive thinking of General Zia-ul-haq (the only burnt alive president in Pakistan’s history) preferred to insult the nation.

And now, No. 2 occurred recently by the other component of 3 Jeems, i.e., judiciary under the leadership of Chief Justice Iftikhar Muhammad Chaudhry. The judges followed General Zia-ul-Haq’s tradition by announcing a pending judgment soon after the take off of an elected Prime Minister (Mr. Gilani) of the country to Britain. They found it the BEST TIME to insult a Prime Minister and for us, the whole nation. Perhaps they are unable to conceive that WHEN they have done this. It is very much unfortunate that we have such great judges who have wisdom to disgrace their nation by selecting such an appropriate time.

In the eyes of these holy cows, perhaps they have availed the golden chance to prove the independence and supremacy of judiciary.