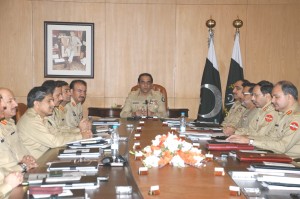 ON the anniversary of Osama bin Laden’s death last week, Pakistanwas the only Muslim country in which hundreds of demonstrators gathered to show solidarity with the dead terrorist figurehead.

Yet rather than asking tough questions about how Bin Laden had managed to live unmolested in Pakistan for years, the Pakistani Supreme Court instead chose to punish the prime minister, Yousaf Raza Gilani, by charging him with contempt for failing to carry out the court’s own partisan agenda — in this case, pressuring the Swiss government to reopen a decades-old corruption investigation of President Asif Ali Zardari. (Never mind that Swiss officials say they are unlikely to revisit the charges.)

In handing down the decision, one justice chose to paraphrase the Lebanese poet Khalil Gibran. He held forth in a long appeal to religious-nationalist sentiment that began with the line, “Pity the nation that achieves nationhood in the name of a religion but pays little heed to truth, righteousness and accountability, which are the essence of every religion.”

That a Supreme Court justice would cite poetry instead of law while sentencing an elected leader on questionable charges reflects Pakistan’s deep state of denial about its true national priorities at a time when the country is threatened by religious extremism and terrorism.

Today, Pakistan is polarized between those who envision a modern, pluralist country and those who condone violence against minorities and terrorism in the name of Islam. Many are caught in the middle; they support the pluralist vision but dislike the politicians espousing it.

Meanwhile, an elephant in the room remains. We still don’t know who enabled Bin Laden to live freely in Pakistan. Documents found on computers in his compound offer no direct evidence of support from Pakistan’s government, army or intelligence services. But even if Bin Laden relied on a private support network, our courts should be focused on identifying, arresting and prosecuting the individuals who helped him. Unfortunately, their priorities seem to lie elsewhere.

In Pakistan, most of the debate about Bin Laden has centered on how and why America violated Pakistan’s sovereignty by unilaterally carrying out an operation to kill him. There has been little discussion about whether the presence of the world’s most-wanted terrorist in a garrison town filled with army officers was itself a threat to the sovereignty and security of Pakistan.

Pakistanis are right to see themselves as victims of terrorism and to be offended by American unilateralism in dealing with it. Last year alone, 4,447 people were killed in 476 major terrorist attacks. Over the last decade, thousands of soldiers and law enforcement officers have died fighting terrorists — both homegrown, and those inspired by Al Qaeda’s nihilist ideology.

But if anything, the reaction should be to gear up and fight jihadist ideology and those who perpetrate terrorist acts in its name; they remain the gravest threat to Pakistan’s stability. Instead, our national discourse has been hijacked by those seeking to deflect attention from militant Islamic extremism.

The national mind-set that condones this sort of extremism was cultivated and encouraged under the military dictatorships of Gen. Mohammad Zia ul-Haq from 1977 to 1988 and Gen. Pervez Musharraf from 1999 to 2008. A whole generation of Pakistanis has grown up with textbooks that conflate Pakistani nationalism with Islamist exclusivism.

Anti-Western sentiment and a sense of collective victimhood were cultivated as a substitute for serious debate on social or economic policy. Militant groups were given free rein, originally with American support, to resist the Soviet occupation of Afghanistan, and later became an instrument of Pakistani regional influence there and in Indian-occupied Kashmir.

Pakistan’s return to democracy, after the elections of 2008, offered hope. But the elected government has since been hobbled by domestic political infighting and judicial activism on every issue except extremism and terrorism.

Before Mr. Musharraf was ousted, a populist lawyers’ movement successfully challenged his firing of Supreme Court justices. The lawyers’ willingness to confront Mr. Musharraf in his last days raised hopes of a new era. But over the last four years, the Court has spent most of its energy trying to dislodge the government by insisting on reopening cases of alleged corruption from the 1990s. During the same period, no significant terrorist leader has been convicted, and many have been set free by judges who overtly sympathize with their ideology.

This has happened because the lawyers’ movement split into two factions after Mr. Musharraf’s fall: those emphasizing the rule of law and those seeking to use the judiciary as a rival to elected leaders.

Asma Jahangir, who helped lead the lawyers’ movement, has become a critic of the courts, accusing them of overstepping their constitutional mandate and falling under the influence of the security establishment. And Aitzaz Ahsan, who represented the Supreme Court’s chief justice during the lawyers’ showdown with Mr. Musharraf, is now Prime Minister Gilani’s lawyer in the contempt-of-court case — a clear indication of the political realignment that has taken place.

Meanwhile, Pakistan’s raucous media, whose hard-won freedom is crucial for the success of democracy, has done little to help generate support for eliminating extremism and fighting terrorism. The Supreme Court, conservative opposition parties and the news media insist that confronting alleged incompetence and corruption in the current government is more important than turning Pakistan away from Islamist radicalism.

While fighting Pakistan’s endemic corruption is vital, the media and judiciary have helped redirect attention away from the threat of jihadist ideology by constantly targeting the governing party — a convenient situation for the intelligence services, which would prefer to keep the spotlight on the civilian government rather than on the militant groups they have historically supported.

Convicting the dozens of terrorists released by Pakistani courts should be a greater priority for the country’s judiciary than scoring points against the elected executive branch. And the Pakistani media should be more focused on asking why those deemed terrorists internationally are celebrated as heroes at home.

Until their priorities shift, the empty pronouncements of our leaders against terrorism and the sacrifices of our soldiers in battle with militants will not suffice to change the nation’s course.

Husain Haqqani, a professor at Boston University, was Pakistan’s ambassador to the United States from 2008 to 2011.