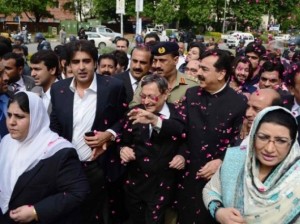 After days of much speculation, the volcano of PM’s contempt case  for not implementing the SC’s ruling in the NRO case,  that was frantically and deafeningly been erupting for days, finally erupted and is being expected to damage, if not burn everything down. Yeah yeah!  We all heard that! Ever since the much-awaited, and for many the much-expected, “historical verdict” was out, we have all been talking about it in offices, cafes, social networking sites,  etc,. Our discussions and arguments revolve around from demanding the PM to resign, (since he is found guilty and convicted now), to threats of another violent street protest in the forms of Long March or Tsunami.

But before I go on even thinking about the slightest possibility of any such protest, I would actually take out a moment to review what has happened and the way a mango man sees it, who for the last couple of weeks continues to wonder Why just one Letter has become the pain of all getting country to a standstill ?

A night before the verdict was out, we see most of our current affairs anchors, politicians, retired army officers and closet legal geniuses discussing the drop-scene of the Contempt case and aftermath of PM’s political future, to the extent of even reporting “the preparations in Adyala jail” and “the expected publication of Chaah-e-Yousuf Volume II”.

The following morning, way before 9 am, we see reporters reporting from SC about the security measures, walk-through gates, hovering helicopters and excited crowd of public, PPP ministers waiting to greet the Prime Minister and show their support with him. The PM marches towards the courtroom, amid rose petals and cheering slogans.

Here comes the interesting part , inside the fully occupied courtroom, as predicted by the media pundits,  7 judges unanimously announce  the  Prime Minister Yousaf Raza Gillani for contempt of court and orders imprisonment for 37 seconds till the rising of the judges. Yes,  37 seconds, never before than this conviction, many people knew any punishment could be as short as that. It took almost everyone with surprise. First, I thought the media is as usual trying to present the news in the most dramatic, sensationalized and entertaining way with their most annoying manner of mixing news with special effects, background song and not-so-funny one liners.  But I could bring myself to believe all that when I found the same news on several other news channels too.

The Prime Minister gets convicted since he “willfully” disobeyed the court’s orders by not writing a letter to the Swiss authorities to re-open the money laundering cases against President Asif Ali Zardari.  And according to the judges, PM’s actions have “tended to scandalize, defame and ridicule the court”. Yes the same PM, who stood respectfully before the bench and humbly appeared before the court thrice, but those who think actions speak louder than words, Forget it, old Chinese proverbs require upgrades.

In a country like Pakistan where democracy is taking its roots, the list of “First time in the history of Pakistan” seems to be never-ending. The longest serving Prime Minister, whose the First one to complete 4 years of his tenure, becomes the first serving PM to get convicted who completes his imprisonment in the courtroom (thankfully without being bullied by cops, handcuffed or going behind bars) and walks out of the courtroom, waving his supporters and taking his way back home, I meant literally as PM’s house is adjacent to SC.

Formerly I used to wonder if ever in world’s history, any country’s Supreme Court got over-involved and stuck up with “You must write a letter” sort of urgings. Subsequently, I wonder along the course of the frenzy in public discourse, the real matter has been lost. The real issue was “non-writing of the letter” which leads to contempt of court convicted by a PM, who has constitutional immunity just like the President, Governor, CM or any other political head, during his term in the office. What’s left to debate now, absolutely nothing!!!

The Supreme Court’s order for convicting the PM did not achieve its desired objective – the letter has not been written yet.  So order lacked effectiveness. Secondly it did not earn the judges any respect. When a Suo Moto is taken, “a fair trial” is not an alien demand by the respondent. Judges not paying any attention towards the impartiality of the bench and then a unanimous decision by all 7 judges does give an impression of biased and ready-made justice. In a displeased national atmosphere, when the ruling party has been made to face numerous court cases, and has grievances against the discriminately-independent judiciary, PPP expecting the judges to treat them fairly is just like expecting the bull not to attack you because you are a vegetarian.

Thirdly, since it’s the same Supreme Court that miscarriaged the justice and hung ZAB in 1979 and it’s the same Supreme Court that legalized the military regimes of all four dictators, the credibility of the highest court of law was at stake. By convicting the PM and restricting the punishment to 37 secs, and not disqualifying him, the SC held back the decision and left it mischievously open. . . keep guessing!!!

I certainly find the serving PM fortunate enough, in comparison to the other PMs’ who were sentenced for hijacking a plane or hanged.

And to say the least,

While out to the Mango man, this time its evident that its always about portraying the ruling party as unpopular, leadership as corrupt and crooked, keeping the government occupied in defending some allegedly conspiracy against the military establishment, and derailing democracy, whenever, however and in whatever way possible.

Now this decision of Supreme Court can be considered the best opportunity to achieve any of the following objectives:

1)    Remove the PM, whose so going to evolve a consensus for the creation of a new Seraiki province.

2)     Perfect time to start campaigning for the upcoming general election, and get brownie points by removing/replacing the convicted PM

But some things are easy said than done. Let’s just assume both the options one after the other. If the PM is replaced by some other ruling party , he is still not going to write the letter. For PPP leaders, it’s more about their loyalties with their leaders. Hence, it’s of no use.

Second option is the constitutional way to remove the Pm is to get a vote of no-confidence, which is impossible. I must hand it to PPP for taking its coalition partners together in all highs and lows. Despite opposition, media and judiciary being on one side, they just can’t over-throw the ruling party.

Now the unconstitutional way is “The Street Protest”- not a new idea anymore, it has been tested and tried once which achieved its set goal. So to pressurize the government to remove the PM and call for an early election, we see PML-N threatening to go for a Long March and PTI gearing up for a Tsunami. Unfortunately, and nothing like the restoration of the judiciary movement, this street protest is never going to take place. I can go on with an endless list how many times we all have heard NS threatening to use the Long March tool in the past four years. And PML-N can’t be that stupid to resign from their positions, get along with PTI, protest and then get forever done with their remaining vote bank. Sorry Miyan Sahab! You lack that charisma and charm that youth these days see in Khan Sahab!!  Even if they both demonstrate together, Khan Sahab is certainly going to take away the whole cake and leave the Sharif brothers with a heavy heart. And it would be very heart-breaking for all of us too see you hatching conspiracies in Raiwind for the next five years and bearing Ch Nisar’s long boring useless speeches.

But amid all this war of words, chaos and confusion, we must not forget that due to the court proceedings and political instability, our economy is suffering and collapsing day by day. The US-Pak relationships need to be mended on apriority basis. The sooner everything is fixed, the better!!!