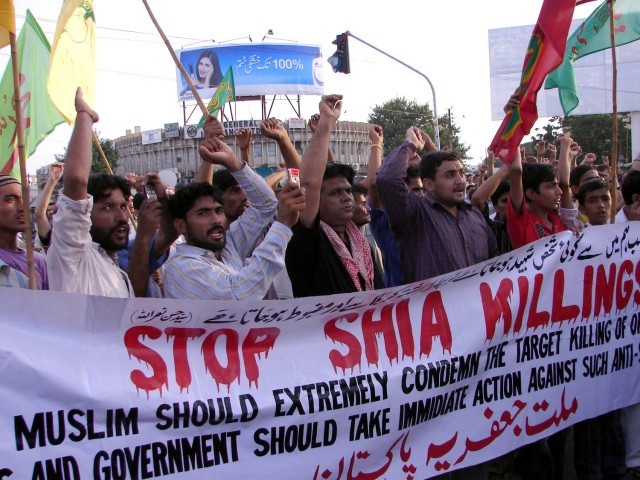 After decades of waging the propaganda war against India for its highhanded treatment of Kashmiris, Pakistan is now the subject of a similar campaign by India who has highlighted the plight of Shias being murdered by sectarian terrorists in Gilgit-Baltistan.

The Asian News International reported recently that “in Gilgit-Baltistan, Pakistan’s only Shia dominated province, ethnic cleansing is being carried out systematically.” At the same time, the Shia-dominated town of Kargil in the Indian controlled Kashmir recently shut down the main bazaar in solidarity with the Shias of Gilgit and Chilas who were murdered in cold blood in early April. Several Sunni Muslims also lost their lives a few days later when sectarian violence broke out in the region.

The comparative statistics on terrorist violence between India and Pakistan speak volumes of how the tide has indeed turned against Pakistan. The data compiled by South Asian Terrorism Portal reveals that in the current year alone, approximately 150 civilians, mostly Shias, have died in sectarian violence in Pakistan. In comparison only 23 violent deaths were recorded in the Indian controlled Kashmir in 2012.

Even with a six-times larger demographic footprint, 62 civilians reportedly died in terrorist violence in India in 2012, whereas 734 civilians became victims of terrorist violence in Pakistan during the same time period. For decades, Pakistan had pointed finger at India and accused her of failing to protect the life and property of religious minorities. Today, Pakistan stands accused of the same where Muslims belonging to minority sects and others are being murdered while the state’s machinery has failed miserably to protect their lives and property.

Sectarian violence has spread to all corners of Pakistan. Only last week several Shias belonging to the Hazara tribe were gunned down by the Sunni extremists in a crowded market in Quetta. Later, Sunni militants called local newspapers and claimed responsibility for their murderous accomplishment. Over the past few years hundreds, if not thousands, of Shias have been murdered in Kurram Agency by Sunni extremists and Taliban factions who are reportedly aligned with Pakistan’s intelligence agencies. In other parts of Pakistan Shias have been taken off buses, lined up, and gunned down.

As of late, the followers of majority Sunni sects, such as Barelvis, have increasingly become targets of militants who are followers of radicalised Sunni sects. The attack on Data Darbar, the mausoleum of Lahore’s patron saint, in July 2010 left almost 50 moderate Sunni Muslims dead. In an earlier post, I reported police statistics which showed that almost 90 per cent of arrested terrorists in Pakistan were followers of the Deobandi sect.

It is only recently that the moderate Sunnis have been targeted by the followers of radical Sunni sects in Pakistan. However, for decades, Shias and other minorities were the only victims of extremist violence. The majority Sunnis, who never agreed with the murderous agenda of the few radicalised groups, however remained complacent and maintained a deafening silence over the murders of Shias and others, which escalated during the dark days of General Ziaul Haq. It was during General Zia’s time when madrassas were turned into military academies where intelligence operatives trained hundreds of thousands of Afghans, Arabs, and Pakistanis in warfare; equipped them with Kalashnikov assault rifles and Stringer missiles; and marched them into Afghanistan.

The widespread distribution of small arms weaponised the Afghan society to such extremes that after the withdrawal of the Soviet Army in 1989 successive Afghan regimes collapsed because of the in-fighting that continued between heavily armed Afghan militias who could not agree on a post-Soviet governance formula. While Afghanistan imploded in the early 90s as a direct result of military interventions by the Soviets, Americans, Saudis, and Pakistanis, several thousand alumni of the Afghan war returned to Pakistan to establish their own mini jihad factories in every nook and corner of Pakistan. For over a decade, the jihadis used Shias for target practice until they waged a full-fledged war against Pakistan’s establishment in 2001.

The patron-in-chief of the jihadis, including the Taliban, has been General Hameed Gul, who headed Pakistan’s Inter-Services Intelligence during the formative years when Russian-made weapons were shipped from Egypt and elsewhere to equip Afghans and others to fight the Red Army in Afghanistan. General Gul was recently confronted by an inimical group of Shias who were protesting outside the Parliament in Islamabad. As the crowd complained against his longstanding relationship with the militants leading terrorist attacks against Shias, the General instead came off as the biggest dove as he addressed the crowd while his son whispered speaking notes in his ear. General Hameed Gul claimed to have initiated deweaponising the militants before he was removed from ISI in June 1989.

I happened to meet General Hameed Gul in a suburb of Toronto in the mid-90s when he visited Canada. Sitting among a large group of devotees, General Gul spoke with pride of the “successes” achieved by the Taliban in Afghanistan. I specifically asked the General if he was at all concerned about the excessive spread of small arms and assault weapons in Pakistan and Afghanistan. His answer then was quite different from what he stated on April 10 in Islamabad. General Gul looked at me with barely concealed disgust and observed that weapons were the ornaments for men. “It is the same weapons that will come in handy to ward off the enemy,” proclaimed General Gul.

Since his proclamation in the mid-90s, the same ornaments have dispatched thousands of Pakistanis to their graves and have brought the state and the society to a near default. In the comity of nations, Pakistan is increasingly being referred to as a pariah state. Even the overseas Pakistanis now march outside Pakistani embassies to protest against the massacres of minorities that continue unabated. Wherea,s once Pakistan complained of human rights violations by India in the United Nations, other are now accusing Pakistan of the same.

As the violence increases in Pakistan, the rest of the world loses its confidence in Pakistan’s ability to meet her economic, legal, and moral obligations. If the sectarian and factional violence, which no longer targets only the Shias and other minorities, continues in Pakistan, it is likely that the state and the society will implode, as it has already in the neighbouring Afghanistan.

It is imperative for Pakistan’s military and civilian establishment to recognise that the time to act decisively against extremists in Pakistan has arrived. There is no room or time to play favourites and support the “good militants” who may side with the establishment for a short while, but the same good militants will most likely turn against their handlers, as they have done so repeatedly in the last few years.

Click here to post a comment
How Nawaz transferred 500 million pounds to UK? -by Javed Syed
The Saudi fifth column on our nation’s campuses -by Lee Kaplan