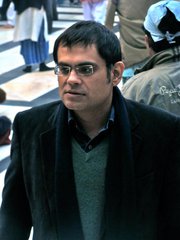 Does Hamid Mir continue his great father’s legacy in journalism?

In the last few months, certain apparently “liberal” journalists in Pakistan (several of them belong to the Najam Sethi club and/or ISI-sponsored Jinnah Institute) have been trying to promote Hamid Mir and other dubious persons as anti-military establishment, champion of free media and human rights.

For example, last year Omar Waraich published a column in The Time in which he tried to present three widely known apologists and propagandists of the military establishment, namely Hamid Mir, Ejaz Haider and Najam Sethi, as anti-ISI.

However, while Pakistan’s pseudo-liberals have been unable to repair the lost credibility of Hamid Mir, Sethi, Haider etc, in this process they have dented their own credentials.

In the latest expression of the pseudo-liberal right-wing alliance, Raza Rumi (the liberal posing editor of Pak Tea House blog and The Friday Times magazine) was seen today (8 April 2012) promoting Hamid Mir in the following words:

As a keen reader of Pakistani journalism and politics, I immediately noticed that nothing could be a bigger insult to the memory of late Waris Mir to compare his great legacy with the yellow journalism of ideologically and financially bankrupt Hamid Mir.

Waris Mir gave his life boldly writing and resisting against General Zia-ul-Haq’s military regime and its Islamo-fascist Jihadi poodles (Jamaat-e-Islami, to be specific). In contrast, Hamid Mir became a willing partner and tool of the Deep State (army) and actively promoted and supported Pakistan army’s Jihadi policies in Afghanistan and Kashmir. Hamid Mir developed links with the Al Qaeda and Taliban (including Punjabi Taliban aka Sipah-e-Sahaba) and was trusted by their senior leaders as an important spokesman in Pakistan’s print and electronic media.

Mir was also found to be involved in hate speech against Ahmadiyya Muslims in one of the audiotapes leaked two years ago. A few days after the tape was leaked, at least 100 Ahmadiyya Muslims were brutally butchered in Lahore by Hamid Mir’s friends, the Punjabi Taliban (aka Sipah-e-Sahaba Pakistan SSP / ASWJ)

Further, Mir’s role in Khalid Khwaja’s murder by the Taliban is also pending investigation despite the police report and numerous appeals by late Khwaja’s son. http://ahmadiyyatimes.blogspot.co.uk/2010/05/pakistan-audio-tape-implicates-hamid.html

Hamid Mir has consistently misrepresented the ISI-sponsored Shia genocide as Hazara specific ethnic violence in Quetta and Sunni-Shia sectarian violence in other parts of Pakistan.

Most recently, Hamid Mir has appeared as an advocate of Hafiz Saeed’s human rights in response to the US announcement of bounty of $10 Millions on the head of Hafiz Saeed, the founder of notorious terrorist organization Lashkar-e-Taiba aks Jamaat-Ud-Dawa in Pakistan which is also an ally of another terrorist group Sipah-e-Sahaba Pakistan (aka Ahle Sunnat Wal Jamaat), also has close linkages with much maligned intelligence agency of Pakistan, the ISI. Not only the ISI has been denying the charges on Hafiz Saeed but also many of ISI’s assets within Pakistan’s Urdu media (generally right-wing) and English media (generally pseudo-liberals) have extended support to Hafiz Saeed.

In his interview with an Indian TV channel yesterday(7 April), Hamid Mir presented an apologist and dishonest view on Hafiz Saeed. He completely disregarded the fact that Hafiz Saeed is the founder and main leader of the ISI-sponsored LeT-JuD Jihadi network which is responsible for terrorist activities in Indian-administered Kashmir and other parts of India. He also lied that Hafiz Saeed was very unpopular in Pakistan and the bounty money had made him popular. How would he explain the presence of thousands of ISI-backed mercenaries who used to attend Hafiz Saeed (JuD) and Ahemd Ludhianvi (ASWJ-SSP) led Difa-e-Pakistan rallies in Lahore, Karachi and other cities in the last few months?

Both of them use general stereotypes to label and reduce Pakistan Shias as Iranian agents; https://lubpak.net/archives/75388

We are very sad and sorry to note that a noted liberal columnist such as Raza Rumi is presenting and promoting a patent affiliate and apologist of the Taliban and Sipah-e-Sahaba.

As a matter of principle, we refuse to recognize pseudo-liberals as representing the liberal or progressive section of Pakistani society. We also advise our readers to keep a close eye on the pseudo-liberal right-wing alliance in Pakistani media, which is currently busy in manufacturing and promoting fake heroes.