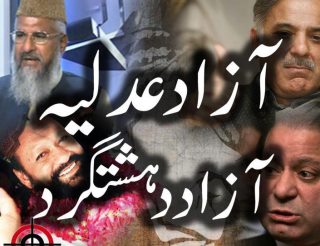 The Supreme Court of Pakistan has just convicted an elected Prime Minister for following an explicit Constitutional clause (Article 248 (2)) – on the basis of an Ordinance passed by a military dictator, General Musharaf (Contempt of Court Ordinance 2004) – who in turn was empowered to subvert the Constitution by this very same Judiciary!  However, if one is expecting any balance or nuance from Pakistan’s media on this landmark decision, one is sorely mistaken.

The media’s role in being a cheer leader of right-wing, Islamist politicians and populist judges is an unfortunate departure from its often stated role of being a “fair and balanced” presenter of the news and of informing the public.  In the last few years, the media, for the most part, has gone out of its way in presenting, supporting and empowering an obscurantist and conspiratorial mindset that is low on facts and high on sanctimonious piety and selective morality.

To understand the “dynamics” of the symbiotic relationship between the media and the judiciary, one needs to look no further than the following exchange that took place between the dignified Information Minister, Qamar Zaman Kaira and prominent news anchor, Kamran Khan.  It is a sad reflection of how the media distorts facts and is very reluctant to allow gentlemen like Kaira to argue a case on its merits, as opposed to moral grandstanding.

At this point in time, one must also reflect on the role of Pakistan’s Jejune “liberals” who were an essential part of the Lawyer’s Movement, long after it had lost its legitimacy post-2008 elections.  This was when all judges were released by the newly elected Prime Minister, Yousuf Raza Gillani and over 96% of them restored.  The current Junta in the judiciary that often evokes dictator-inserted clauses to continuously undermine the legislature and the executive has been hugely supported by the Jejune “liberals” of Pakistan – an exclusivist cabal who assume the moral high ground by discarding with uncomfortable facts as it relates to them.

By distorting history and constructing a narrative based on half-truths and distortions, this elite cabal of Jejune “liberals” spare no opportunity to bash the PPP in general and Shaheed Zulfiqar Ali Bhutto and Shaheed Mohtarma Benazir Bhutto in particular.  While one must acknowledge their mistakes, inflating their role in the current problems facing Pakistan is both an intellectual fallacy as well as deflecting the role of Pakistan’s Jejune “Liberals”.

By their willful and continuing support to this judiciary, Pakistan’s Jejune “liberals” stand forever exposed as opportunists who share an equal blame in the current constitutional crisis.  In their published articles and media space, these Jejune “liberals” of Pakistan have portrayed this judiciary as anti-military dictatorship.  After today’s verdict (on dictator-inserted clauses), their misrepresentation of this judiciary comes across as a cruel joke to the public.  However, one should not comment any further as Pakistan’s Jejune “liberals” are deeply intolerant of criticism and one cannot afford the witch hunts and intimidation that ensues after they are criticized.

Today’ verdict against the Prime Minister was based on THOSE parts of the Constitution which were mangled by military dictators, General Zia and General Musharaf while the Prime Minister did not want to violate THAT part of the Constitution that is derived from the Geneva Convention.  Pakistan’s Jejune “liberals” who never tire of inflating and misrepresenting ZAB’s role in creating religious intolerance need some honest self-reflection given their own support for this judiciary and its continued usage of Article 63 – a constitutional clause that was mangled by General Zia ul Haq; whose coup and martial law was supported by the judiciary then; as was General Musharaf by the current judiciary.  Article 63, as it stands, is the Islamist manifesto of Jamaat Islami and the pillar used by this judiciary for its often controversial decisions.