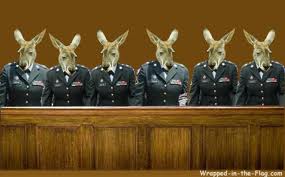 The Supreme Court’s controversial detailed verdict against the elected Prime Minister of Pakistan is one more bad decision by a Court that has a dark history of collaboration with the military in depriving the people of Pakistan of their fundamental rights.

The Supreme Court has been transcending its legal boundaries and constitutional role. Its decisions are biased, unfair and politicized. The Court is not a neutral and objective defender of law and judges have been acting as puppets.

The Judiciary is not independent and appears to be playing someone’s game. Indeed the Supreme Court is acting as a proxy for imposing a controlled democracy in Pakistan. It seems that characters such as Imran Khan and Dr. Abdul Qadeer Khan are part of this game. The former ISI chief Lt. General Shuja Pasha was an architect of the latest effort to introduce ‘clean democracy’ in Pakistan. General Pasha was not alone in military’s one more political adventure.

Actually, the military considers itself the sole defender of Pakistan and generals have been trying to shape and control the Pakistani politics. In fact, the military never felt comfortable with parliamentary form of democracy. For this reason every few years new campaigns are launched to ‘clean’ the system.

Dr. Abdul Qadeer Khan’s recent calls for the establishment of a technocrat government and Imran Khan’s Tsunami are reflections of military’s new efforts to bring a setup that ‘suits’ Pakistan. The Judiciary and media are means to complete that agenda. As the Parliament is about to complete its term, Imran Khan is threatening that he would not accept results of the new elections. Dr. Qadeer, dubbed by some as the future president,  has joined hands with Imran Khan. The media and the Judiciary are taking cue from some in the military to pressurize the present government.  All these actors want to maintain the status quo by imposing a controlled democracy.

The military’s frustration with the current political system is understandable. The System is inefficient and has failed to solve key problems. It is also true, to some extent, that Westminster style democracy is not suitable for Pakistan because it is not an indigenous governing system and doesn’t represent the true soul of the Pakistani society. Therefore it is a fact that the Pakistani political system is in need of major reforms. The country has to develop a democratic model that meets local needs and reflects aspirations of the people of Pakistan. However, this goal can only be achieved through democracy, not by military rules or military controlled system.

Historically, the military has damaged Pakistan more than any other institution. General Ayub Khan turned Pakistan into a U.S satellite state. He had sown seeds of hatred in East Pakistan and General Yahya Khan’s military operation broke Pakistan; General Zia’s evil policies and his Afghan Jihad divided and destroyed all fibers of our society. General Aslam Beg’s intervention in Kashmir and Afghanistan, and General Musharraf’s participation in the ‘war on terror’ all the above actions and policies have devastated Pakistan.

The military interventions have been disastrous for Pakistan because  military dictators promoted extremist, racist and narrow-minded agendas. From the very beginning, with the help of its proxies, the military manufactured an ‘Ideology of Pakistan’ and an inflated and superficial nationalism blended with distorted Islamic history. During the Zia’s era the military had portrayed itself as the Holy Army of Islam.

Up until today some military officers, judges and mullahs as well as the media argue that Pakistan is a security state, which is at perpetual war with its neighbors and most of the world. They insist that Pakistan was created with a purpose to lead the so-called Muslim Ummah and it will eventually dominate the entire world.  People with such thinking often follow double standards. A Supreme Court judge, Justice Asif Saeed Khosa is one of them.

Justice Khosa likes to attack those who disagree with deeply flawed security perceptions of the military and judiciary, their misplaced self-righteousness and false moral and cultural values, but Justice Khosa doesn’t have the moral courage and grace to say that his own father-in-law and a retired Supreme Court judge Naseem Hasan Shah was professionally dishonest and had committed a judicial murder. Shouldn’t Justice Shah be tried by Justice Khosa’s court?

People with Justice Khosa mindset consider the Pakistan Peoples Party (PPP) unfit to govern the country despite that fact that it is the single largest party that enjoys support in all parts of Pakistan.

Once again, financially and morally corrupt generals, judges and journalists have launched a concerted attempt to disrupt the smooth transition of power and continuity of democratic process. The PPP-led coalition government has been under attack because some perceive the PPP a threat to their security agenda.

The military eliminated the founder leader of PPP, Zulfiqar Ali Bhutto, because independent minded Bhutto was a Pakistani nationalist with a modern world-view. Besides, visionary Bhutto had become a threat to imperialist interests in a region where the Pakistani military was a tool of Western imperialist powers. To appease the domestic audience the military used the name of Islam to remove and assassinate Bhutto but in reality generals were protecting Western (American interests) in the region.

The mindset that had eliminated Bhutto is active again to drive the PPP out of power before it completes its term. The Judiciary, the media and some politicians have been inventing scandals. Spy agencies have been involved in dirty campaigns. For example, SMS services on mobile phones are used to defame and unnerve President Asif Ali Zardari.

Justice Chaudhry is managing the Judiciary as a political party with the help of media cheerleaders. As a proxy of the establishment, the Judiciary is haunting the Parliament and a large number of media black sheep are justifying and glorifying inappropriate actions of judges. Perhaps some generals, judges and journalists are  preparing the stage for a ‘new dawn’ in Pakistan.