Many private media sources in Pakistan continue to produce misleading and false propaganda against President Asif Ali Zardari, in both local and national newspapers.

One such short article appeared on the editorial page of the Urdu daily Bebaak Awaz published from Kohat (Khyber Pakhtunkhwa province) a couple of days ago. The article was titled “Yousaf Ali Zardari Hakoomat Ka Karnama” (in English, The Achievement of Yousa Ali Zardari’s Government), written by famous TV and print media journalist Syed Talat Hussain. 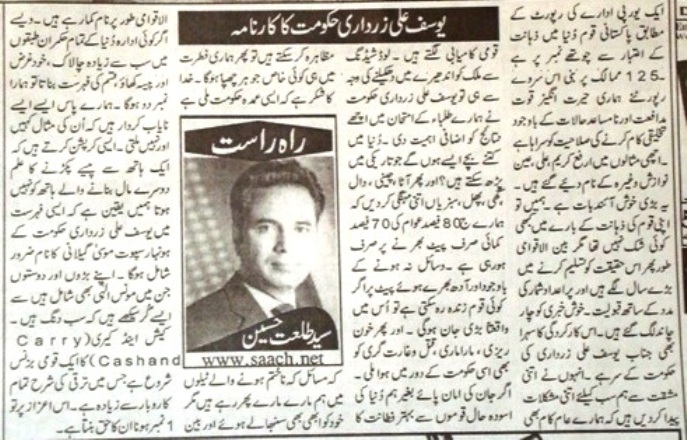 The twisting of the President’s name aside (“Yousaf” instead of “Asif”), the writer appears to have twisted a topic so obtrusively that one can hardly help noticing the frivolity of this attempt at blaming Mr. Zardari’s government for the problems of the Pakistani people.

Starting with a few names (in 180 million population of the country) as Pakistan’s talented people, the column abruptly and illogically attributes this success to Mr. Zardari’s government by claiming that the government created such problems for people that now such common successes appear as achievements at a national level. In other words, the lack of talent, as implied by the writer, appears as abundance of talent due to Mr. Zardari. With this ridiculous assumption, the column goes on to hold Mr. Zaradi’s government responsible for all the problems of Pakistan—the crammed list that is part of anti-Zardari propaganda campaign.

Nowhere has Talat Hussain touched reason or shown any talent of analysis or insight. His column is so pathetic that one wonders how can such an incompetent writer get such popularity in media. But then we remember that he is the same anchor who kept requesting the public not to ridicule the establishment for failing to prevent Osama Bin Laden’s entry and hiding in this country (http://www.apnatime.com/9620/2011/05/12/telecom/talat-hussain-resents-sms-campaign-pakistan-army/ ). And he is the same writer whose incompetence was made fun of and harshly criticized by educated people after he tried to blast Angelina Jolie by judging him according to fundamentalist Islam Islam (https://lubpak.net/archives/26823 ).

It will not be wrong to say that such biased journalists gain popularity of national level because of pleasing the military establishment and right-wing extremists and attacking the democratic leaders who represent the majority of this country’s population. They don’t see the strengthening of democracy as Mr. Zaradri’s great achievement but continue to create false propaganda against him. So these unprofessional rotes are actually responsible for misleading the nation and damaging Pakistan’s present as well as future.