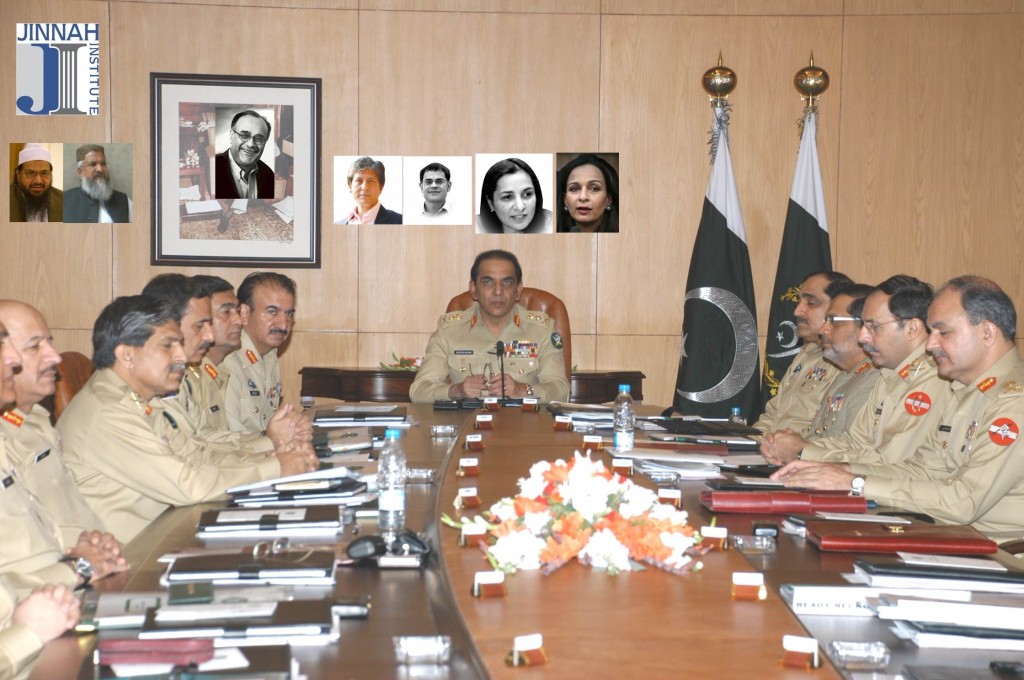 Whenever oppressed and under-funded Paak Fauj and its supporters like Hazrat Hafiz Saeed are under pressure, comrade Ejaz always comes to their rescue. In May last year, when ISI was really under pressure because they had failed to protect Islam’s hero, OBL, Ejaz Haider wrote them a brilliantly esoteric letter – esoteric because even today, it can be interpreted as both a gentle reproach, a mild caress if you may, as well as considerate advice. This was a much needed exercise of Noora Kushti which culminated in Hamid Mir and Ejaz Haider to be briefly depicted as “anti-establishment” – an exercise meant to trim away the fat of propaganda by “liberal scum” that used things like facts, substance, logic and proofs to argue otherwise.

Nonetheless, Ejaz has always been a hit amongst the ghairatmands. His stance on Balochistan and his his exposure of Shia Hazaras as Iranian Fifth columnists were wildly popular amongst my ghairatmand Pious Patriotic Punjabi Puttars (PPPP) and Sipah-e-Sababa buddies. Just two weeks ago,his brilliant reasoning on whether the Ghadar pathan, Dr. Afridi who contributed to the efforts of the martyrdom of Hazrat OBL, is a traitor or not provided our ghairatmands with some solace.
His conclusion

This will bring closure to my friends and I when we go for crabbing-cum- Ziarat of Hazrat Osama bin Laden on my next trip to Karachi in May. And this is the genius of Comrade Ejaz Haider – he says so much without real committing himself – a true wakeel who never pretends to be a lawyer but argues accordingly. Shahbash comrade!

This week, he has written a brilliant article where he articulates the PPPP point of view – the sophisticated legalese which shows that Hafiz Saeed is legally free and it is only the BZP (Bhutto Zardari Party) government that has tried to confine him unsuccessfully. He makes sure that he removes any confusion that Hafiz Saeed and Mother Teresa are bhai-behan (brother-sister) so that his real-liberal friends are kept happy. He also does brilliant point scoring by exposing Amriki hegemony and imperialism for daring to threaten a pacifist humanist like Hafiz Saeed.

This article by Comrade Ejaz Haider has blown me away. Its brilliant legalistic reasoning for the liberty and life of Hazrat Hafiz Saeed has proven once and for all that Comrade Ejaz Haider is a man of integrity – a man who never forsakes his principles and has always been proven correct. After all, who can forget how the brave JuD-LeT bravely lead the peaceful, humanist, tolerant Khatam-e-Nubuwat movement against the Qadianis.

There are liberal fascists like Kalidas Shrivastrum (aka Kamran Shafi) who criticizes LeT- but this man also criticizes the Pious Patriotic Puttar Fauj so he cannot be trusted. Then there is is liberal fascist Fannie May (aka Farhat Taj) who has the audacity to counter the truth  of comrade Ejaz Haider with such Zionist tactics like FACTS, REASON, NUANCE, EMPATHY. To her, I say:

Take your Naansense to the foolish and uppity Pathan invaders who have occupied NWFP and FATA and are fighting against the indigenous Arab-Pakistani (Abu Mustafa Yazid), Uzbek Pakistani (Tahir Yashuldev) and Punjabi Puttar (Illyas Kashmiri) who have lived there for …… many, many weeks now

To liberal fascists like Kalidas Shrivastrum and Fannie May, I also say this:

The two of you can never touch even the soles of ghazis like Ejaz Haider and Najam Sethi as they are in Parwaaz in “Made-in-Pakistan” Shaheens (or helicopters if you insist on referring to them by their Judeo-Christain name). They fly in the Shaheens of Pious Patriotic Puttar army and hence they are the epitome of Ghairat.

Having dismissed these liberal fascists with my brilliant reasoning, I now compare this brilliant legalistic defense of Hafiz Saeed by Ejaz Haider with the latter’s contribution to the objective, principled, dispassionate, well-argued, substantiated and daring criticism of Tyrant Zardari; after reading this no one can dare accuse Comrade Ejaz of double standards in terms of his advocacy for Due Process:

“Let us start with the basics. You are an a——. A thief. An alleged murderer. And a scoundrel. And mind-blowingly incompetent to boot. The only reason you matter is because your equally incompetent, currently delusional, then dysfunctional, mother-in-law thought that you were such a lowly piece of shit that you would never get in the way of your late wife, also delusional, whose dowry included the most popular political party in Pakistan. Why she had such elevated expectations of a two-bit thug is beyond us. But still.

After you had done your husbandly duties, the sensible thing for BB to have done would be to have had you shot. In fact, she should just had had your sperm frozen on day one and then had you tortured into the next dimension. But BB made many mistakes, marrying you being one class-fu—–g-A example.”

Subhanallah, I rest my case….

To anyone who wants to critisize true Patriotic-Liberals like Ejaz Haider and his Jinnah Institute comrades like Nasim Zehra, Raza Rumi, Najam Sethi etc. I say this:

You will have to go through me first. Me and the endangered tribe of true liberals will rally around comrade Ejaz and provide him solace from the hurt of any cyber barbs by the “liberal fascists” and “liberal scum”
Ejaz teray Jaanisar, Beshumar, Beshumar

Links to Hajjaji’s pearls of wisdom: