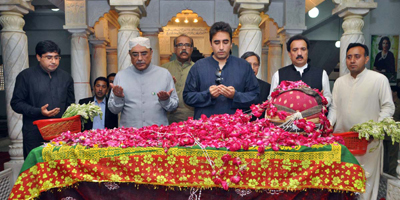 Following is the complete text of the speech of Chairman Pakistan Peoples Party Bilawal Bhutto Zardari delivered during the Central Executive Committee meeting of the PPP on the eve of 33rd death anniversary of Shaheed Zulfiqar Ali Bhutto on Tuesday.

The Supreme Court of Pakistan sentenced Shaheed Bhutto to death by hanging for a crime he did not commit. This judicial murder was not the first nor the last flawed decision our courts have made.
Unfortunately our courts have often stood on the wrong side of history. From the Doctrine of Necessity, to the judicial murder of Shaheed Bhutto and the continued legitimization of violations of our constitution our court shave not performed the role required of them by the constitution of Pakistan.
In 2007, in the final months of the Dictatorship of the day, our courts gave us hope. The brave stance adopted by our judges and the support of the lawyers movement gave us hope that Pakistan would have a truly independent and impartial judiciary.

The restoration of these judges by our Prime Minister was a truly historic milestone for our country.
Now it is up to the courts to redeem their institutions sullied reputation in the eyes of history. Was their brave stance evidence of the beginning of a new era in Pakistan where the judges of our courts will be remembered for dispensing justice, supporting democracy and refusing to do the bidding of our establishment? Or was their stance in 2007 just the exception that proves the rule, were our hopes raised for naught? Must we learn the hard way that once a PCO judge always a PCO judge?

The Supreme Court once told us Shaheed Bhutto was Guilty. The court of history is on our side and has proved his innocence.

There have been some positive developments in the decisions taken by the court to right the wrongs of the past. These developments give me the confidence to believe that the Bhuttos of Larkana will also get the justice they deserve.

Similarly the Asgar Khan case has finally been taken up by the Supreme Court. Shaheed Benazir Bhutto fought for more than a decade for this case to be heard. It is a positive development that following Imran Khan of Lahore’s demand the case has finally been heard. I have no doubt the forces that conspired against the PPP and Shaheed BB shall finally be exposed.

Despite these positive developments there are also some worrying signs. More than 50% of terrorists presented before our courts have been freed. I am told there is a lack of evidence and the fault lies with the prosecution.

The rapists of our sister Mukhtara Mai have been freed by the courts. Presumably for the same reasons. How can there be enough evidence to hang SZAB but not enough evidence to keep terrorists and rapists in prison. How can there be enough evidence to keep Benazir Bhutto Shaheed, President Zardari and Prime Minister Gillani in prison for so long without a conviction but rapists and terrorists are set free. How can there be enough evidence to attempt to try the grave of Shaheed Mohatarma Benazir Bhutto but rapists and terrorists are set free? I urge the courts to proceed with caution. I urge the courts to revisit their flawed decision in the Mukhtara Mai case. I urge the court to help keep our country safe by convicting terrorists for the atrocities they have committed. I urge the court to remember how they got where they are today. On May 12, 2007, 40 members of my party lost their lives supporting this Chief Justice and the cause of an independent judiciary. Is this what they deserve? When will we get justice?
The courts are dangerously close to repeating the mistakes of the past. They should resist the temptation to obey the dictation of the establishment.

Let us pray that cooler heads prevail. Let us pray that our Supreme Court will once again choose to stand on the right side of history. Let us pray that there will not be double standards. That Shaheed Bhutto of Sindh was hanged but another Prime Minister from Punjab is freed. That Shaheed Mohtarma Benazir Bhutto fought in every court in this country and around the world to maintain her innocence. While a former Prime Minister from Punjab, a self confessing, convicted accused is vindicated, while Shaheed BB is put on trial from her grave.

That a Prime Minister who ransacked the Supreme Court is given better treatment over our Serikie speaking prime minister who obeys the constitution and presents himself before the court is stripped of his constitutional rights.

The people have spoken. We are all agreed.