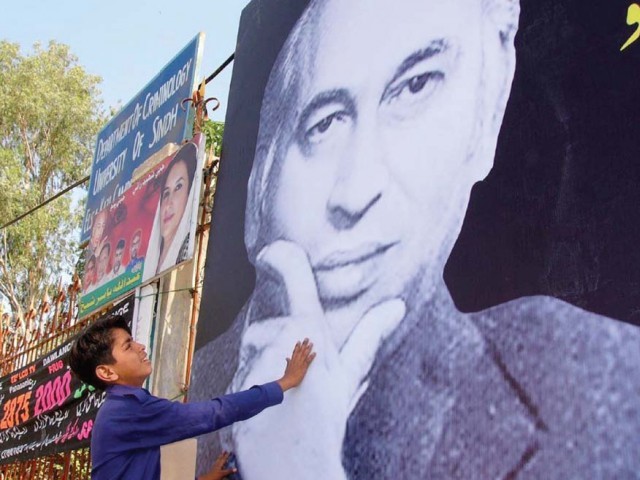 Zulfiqar Ali Bhutto is a known political phenomenon. Bhutto, not only a political leader, is someone who created new kind of politics in the Islamic Republic of Pakistan, first state to be created in the name of Islam. He blessed the country with a constitution that had never been gifted in 26 years, a formal declaration of a country that came into existence in 1947. Bhutto conquered Pakistan as a Titan, conquered hearts, minds and politics.

By his opponents he often got termed as ‘Black mailer’, ‘opportunist’ or rather famed ‘Bhutto Khan’ (civil dictator or disguised military dictator), also named ‘His Imperial Majesty Shahenshah of Pakistan’ by a few. On the other end, his supporters called him ‘Takhare Asia’ (Pride of Asia). For some he had been labeled and also believed to be a hero, quite pompously the group includes me in it. Senator McGovern called him ‘Man of Peace’.
The complex personality owned up to several epithets as projected by academicians, politicians, foreigners, journalists, opponents, following fans, supporters and Jiyalas.

For me, Pakistan produced a hero, not political or theatrical but a peace hero. The idea comes from withheld attributes of the man. Attributes that include the profound and fashionable left-wing views, the fervent Pakistani nationalism, his energy, his youthfulness, all such qualities and characteristics would captivate any person to introduce him as a Peace hero of Pakistan, who paved way for Pakistan towards development and peace.

In enshrining him in to the corridors of history, his remarkable iconoclasm, imaginative foreign policy, political education, his respect for the poor, populist style, courage and all such characteristics combines to enfold the marvels to come in to play.

Believing in the ideal of ‘help from within’ he made Pakistan independent of western dominance. Holding offices in energy, information, commerce and industries and foreign relations at such a young age, it sure had been a political leap in Pakistani politics. Negotiations with India over Indus Water Treaty, (1971), oil exploration agreement with Soviet Union, Allying China, which is how we see industrial sector strengthened, maintaining relations with Washington, revitalizing relationship with Saudi Arabia and other Arab countries had been his few international endeavors. On domestic lines, nuclear programme, Pakistan Steel Mills, heavy mechanical complex Taxila, the very important country consensus constitution of 1973, the age of reforms (land, labor, industrial, economic, banking, exchange, education, health, law reforms) and all other programs and other initiatives out of his political acumen. Furthermore, Bhutto brought in a federalist system, which has now been reinstated by the current government under the leadership of PPP.

On his 33rd death anniversary I rather pen down sentiments, a tribute for the great personality who brought Pakistan a democracy and a constitution. Bhutto earned unfathomable recognition within and abroad. For the formulated critiques he has received over the time period, concerning various issues over his flaws and misconduct, I on the contrary present a note of gratitude and appreciation looking holistically at his entire political life as a martyr who laid down his life at the hands of judicial murder without a trial. For who died not once, but twice at the Central Rawalpindi Jail, the Christian hangman refused to hang a dead man but eventually he had to otherwise face the consequences set by the colonel. A human rights torchbearer rendered his sacrifices for the greater good by not going down without a fight. Pakistan has forgotten its history, in the words of Tarek Fatah (Chasing a Mirage) ‘Pakistan’s jihadi army created a martyr, an adversary that would haunt the nation for decades’.

PPP Human Rights cell declares in the words of Dr. Nafisa Shah, the central coordinator ‘execution of Shaheed Zulifiqar Ali Bhutto a judicial murder and to be denied a fundamental right of a fair trial’.

Click here to post a comment
Shia genocide in Gilgit Baltistan and the role of non-state actors
Chief Justice Sahab, why were you sleeping for 107 days?