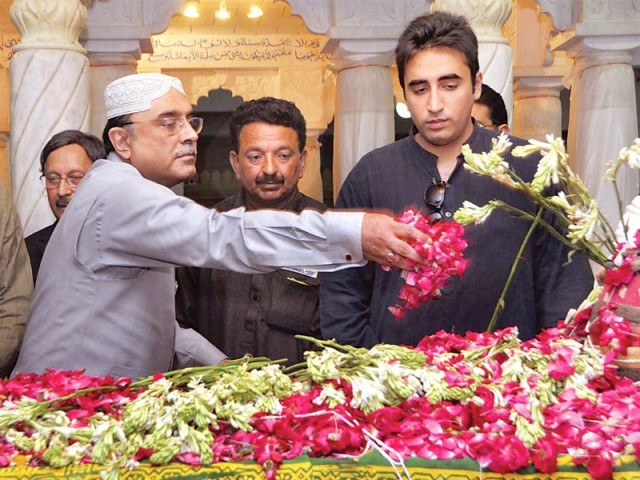 4th April is a day when the PPP comes out as a victor against the forces that have tried their best to create hurdles in its way. Thousands of party workers, leaders and supporters reach Larkana every year to pay respects to Shaheed Zulfikar Ali Bhutto, who was hanged 33 years ago the Judges-Military duo of Pakistan. While many writers spend time on eulogizing what the late ZAB did for Pakistan, last night’s public meeting in Garhi Khuda Bux, just outside the resting place of ZAB, Shaheed Mohtrma Benazir Bhutto, Begum Nusrat Bhutto, Murtaza Bhutto and Shahnawaz Bhutto, was packed with two powerful speeches by the President Asif Ali Zardari and Senator Aitzaz Ahsan.

The President in his brief and concise speech gave two main points:

* Case of review of ZAB’s judicial murder is not listened to, but Rental Power case is heard in no time. And why does the Supreme Court listen to it? Because there was a power plant giving electricity to Naudero

* Why is Prime Minister Yousuf Raza Gilani being hounded by the Supreme Court? Not because he is loyal to the person of Asif Zardari but because he wants to liberate Southern Punjab from the clutches of Takht-e-Lahore

These two points should be a cause for the Supreme League of Pakistan and their Sharif godfathers to worry and ponder about. On the matter of Rental Power Case which was adjudicated on 30th March, 2012, it was shocking to hear repeatedly that the judgment had been reserved on 14th December, 2011. That is a lapse of 107 days. If it was that important a matter of public interest against “krupshion”, then the judgment should have come earlier. The Supreme Court off course then was trying to remove an elected government on the pretext of a memo, so they must have thought that let’s keep the sword hanging and we’ll strike at an opportune time!

Coming to Senator Aitzaz Ahsan, he pleaded that whatever he says in the Supreme Court, a certain section of the media, (whom we lovingly refer to the Jang Group) twists and reports, giving an altogether different story to the public. He said that please report truthfully. That is all one asks! He also referred to his discussions in India where parliamentarians, diplomats, intellectuals met him and inquired about the ongoing case. He said that I put the question to them that “What would India do if a Swiss magistrate summoned President Prathiba Patil?”. He says their answer was “We will break all relations with Switzerland!”. He even said “doosray mulk walay to apna Raymond Davis bhee ley jatay hayn!”

In any case it was a powerful program in Garhi Khuda Bux with thousands in attendance. As the PPP is a party of the people, it is a spectacle to see that people throng the place in thousands in a place which can be considered as an outback! Jiye Bhutto!

Shaheryar Ali says:
April 4, 2012 at 9:37 am
Forgot to mention that Barrister Aitzaz Ahsan (who is supposedly fighting peoples war inn court) was one of the first to betry Shaheed Bhutto and was in party who demanded to hang bhutto on Kohala bridge!
This traitor left party in 77 and was with enemies who hanged Bhutoo , now he first stabbed the party in back collaborated with PML-N, reactionary judges ISI and brought anti PPP judges back n now fighting peoples war with them!!
Subhan Allah!!