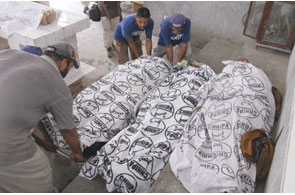 There has been big talk over the issue of local bodies in Sindh and in Karachi in particular over the past few months. As the security situation in the business hub of the country worsens each day, Television and print media commentators , Najam Sethi-Naseem Zehra-Mubasher Lucman, to name a few, squarely blame the Pakistan Peoples’ Party for deliberately for resisting local bodies in Sindh and Karachi. There is an urgent need to dissect these blatant lies.

To begin with, the situation on ground is somewhat different. ‘ Local Govt bill is pending in Sindh Assembly ‘ for quite some time now. The Bill has literally been lingering in the Assembly because of MQM insistence of purely undemocratic delimitation of constituencies which were deliberated in Musharraf era to accomodate and put MQM on an advantage in Sindh over other political parties who have a substantial stake in the commercial hub of the country and have massive representation throughout the province. The seeds of discontent sowed in 10 long Years of military dictatorship are jeopardizing the peace now.

.A truly democratic and peaceful way could have been MQM’s approval of Sindh Assembly’s decision rather than fixing the delimitation issue on the streets of Karachi. The Media at large needs to correct facts: The PPP may have been unwilling to implement the local bodies back in 2007 in the light of charter of democracy signed by Benazir Bhutto and Mian Nawaz , but the party has shown much flexibility over the past two Years, taking the issue to the provincial assembly and carving out an all acceptable program to avoid unwanted confrontation with any of the stake-holders in Sindh.

The PPP has been at ther eieving end throughout. Despite that MQM is in Government in Sindh as well as at the Center, the fall out of Karachi killings is on the largest Party of Sindh, the PPP, consequentially.

The PPP on its wider agenda of reconciliation and coalition governments, is unlikely to impose its decisions on other coalition partners, but the ‘wise’ Media and MQM need to understand that democratic values are truly reflected by accepting and implementing the collective decisions of the elected legislatures.