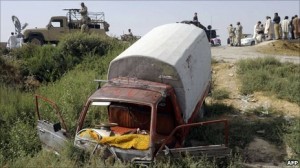 A Sukuzi van on its way to Alamdar Road carrying Shia Hazara passengers from Hazara Town was ambushed by 2 armed assailants when it slowed down near a speed-breaker on Spini Road, Quetta. According to the driver, two bearded men with Kalashnikov rifles walked out of a butcher’s shop on the right side of the road and started spraying bullets on the van. The driver, who stepped on gas with all life left in him, tells that he was chased by the assailants for quite a while throughout which they kept firing at the vehicle.

The attack resulted in the immediate deaths of four Shia Hazaras, including a woman, while another succumbed to injuries at the CMH, taking the tally to 5.

When the news of the attack reached Alamdar Road and Hazara Town, the two densely Shia Hazara dominated areas (or ghettos) in Quetta, angry protestors flocked to Meezan Chowk, Jinnah Road and Brewery Road to stage demonstrations and protest against the killings.

The protests at Meezan Chowk initially encountered a distasteful response from young Pashtuns, numbering close to a couple of thousands, who clearly threatened the Hazaras not to disturb their businesses by creating a scene in ‘their city’ every other day.

This could have easily led to a bitter conflict had more Shia Hazaras not flocked to the scene, and the Pashtuns elders, including the notables of Pashtunkhwa Milli Awami Party (PkMAP) and Anjuman-e-Tajiran-e-Balochistan (ATB) not intervened and admonished the gullible Pashtun youth. The PkMAP and ATB not only condemned the incident, but also said that not only the protestors had a right to it, but even others should join them in the protest. This was evident in their support for the call for shutter-down strike in Quetta the following day. Later, Sardar Akhtar Mengal of the Balochistan National Party (M) also condemned the incident and raised very valid questions implicating for the already known culprit: the Military-Jihadi nexus. 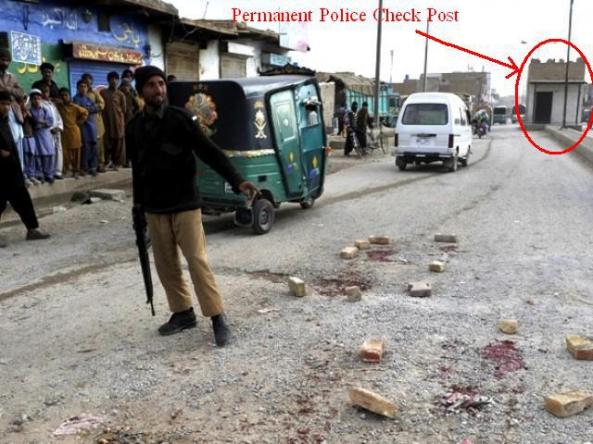 While the protestors at Meezan Chowk and Jinnah Road were lucky enough to remain safe, the ones staging a peaceful demonstration at Brewery Road were not. SHO Brewery Police Station, Nazar Muhammad Dashti baton-charged the peaceful protesters who were staging a sit-in opposite Bolan Medical Complex, which resulted in a few aerial gunshots.

Later, a drama was staged by SHO Nazar Muhammad Dashti who himself shot his gunman, and then asked the police to open fire at the protestors whom he accused of having killed a policeman. This resulted in the death of a 15-year old boy, who had been shot from the back bursting his heart and his chest from the front. He couldn’t have fired at the police even if he had wanted to; all he was holding in one of his hands was a small stick. Along with him, there were 3 others who were injured.

This is not the first time Nazar Dashti has staged such a drama. After a previous attack on Shia Hazaras in the same area, he had carefully placed a few harmless and shallow cuts on his skin, and accused ‘angry Shia Hazara boys’ for having stabbed him with knives. However, his hospital drama ended in a few days. Suffice it to say that Nazar Muhammad is not only anti-Shia and anti-Hazara in views and acts, but he is a darling of the Deep State, proven by the fact that he is the only SHO in whole of Quetta who has jammers installed in his car.

After having killed an innocent protestor and injured another three, the police also arrested 25 of them, of whom three are still in custody and an FIR has been registered against them. What fate awaits them is yet to be ascertained. 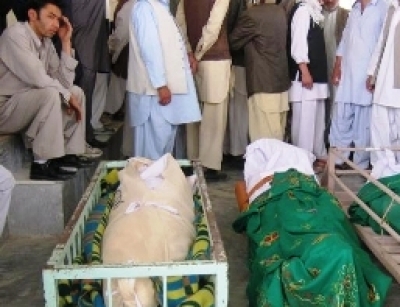 While the Shia Hazara continue to die, most of the Shia Mullahs are trying to make themselves palatable to the military state as well as Iran by ranting about NATO supplies. Even Shia Mullahs in Quetta, most of whom are politically unaware and under-educated, froth at their mouths condemning USA and Israel for the killings.

The so-called Hazara nationalists – represented by Hazara Democratic Party and led by the ISI agent Abdul Khaliq Hazara – are waiting like vultures to sell Shia blood for their political interests. These sell-outs are no friends of the Shia Hazara, and are solely focused on somehow winning a couple of provincial assembly seats in the next elections. For this purpose, they will continue to not only sell Shia Hazara blood, but not even resist from getting them killed if it serves their purpose. These people project Shia Hazaras in Quetta as influenced by Iran in order to pimp themselves to ISI, and more recently even to the US, not realizing that they are corroding all support for the poor populace that continues to die unabated.