I just read this article by liberal fascist imperialist capitalist neocon Nadeem F. Paracha and I don’t know how to attack it. However, I must correct that it was not Duran Duran but original Sufi rock band, Rolling Stones (Ghumtay Pathar) who were there in the mansion with Lord Fartcushion and Lady Airhead and Imran was drinking patriotic Halal Lassi imported from Mianwali. Good to read about Difa-e-Pakistan Chief, Hazrat Hafiz Saeed, the Liberator of Mumbai and currently engaged with Pakistan Tehrik Insaf (Imran Khan Group) – yes, Sipah-e-Sahaba, Lashkar-e-Jhangvi and Jamaat-ud-Dawa are the fiancees of PTI because PTI is engaging with them publically, Subhanallah! 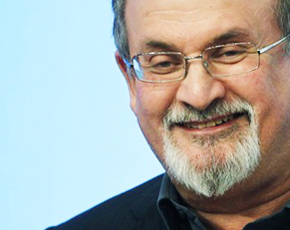 Controversial novelist, author and your mother-in-law trapped in a middle-aged man’s body, Salman Rushdie, announced in London that he is planning to write a book on his relationship with Pakistani cricketer-turned-politician-should-turn-cricketer-again, Imran Khan.

Talking to journalists at London’s Heathrow Airport, Rushdie told reporters that the book is mostly about the art of reverse swing bowling that Imran pioneered during his cricketing days. The book will be called ‘Satanic Reverses.’

Rushdie’s book will be based on his talks with Imran during the time when he first met him in London in 1880. Imran had been invited by Lord John Windstorm and Lady Windstorm for dinner at their luxurious and ghost-infested castle in suburban London.

‘Imran was a very charming young lad then,’ Rushdie told the media personnel. ‘I particularly fancied his Duran Duran hair-cut and his extensive knowledge of London’s finest milk bars.’

Rushdie and Imran recently experienced an acrimonious fall out when Imran refused to attend a Duran Duran reunion concert in Mumbai in which Rushdie was also invited to perform a live human sacrificial ritual on stage to summon the devil.

Talking on the phone from the Aabpara area in Pakistan’s capital, Islamabad, Imran told this correspondent that he couldn’t even imagine sharing the same stage with a devil worshipper like Salman Rushdie. 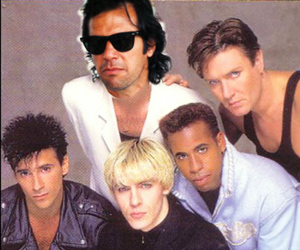 ‘Ever since I retired from cricket, I have been relentlessly working towards eradicating devil worship in Pakistan,’ Imran explained. ‘I was planning to invite Duran Duran to perform at my rally in Mandi Bahauddin, but I am disappointed that they have allowed a Satanist like Rushdie to attend their concert. I have now invited a local pop band, Hafiz Saeed & The Rocking Missiles, to the rally.’

‘They (the band) are actually a great bunch of people,’ Imran said. ‘Very patriotic and very misunderstood. Their latest single, Shezan is the devil’s drink is pretty awesome.’

Imran says that he had never met Rushdie and that Rushdie was lying about the talks they had about reverse swing bowling.

‘The time Rushdie claims I was with him at Lord Windstorm’s castle, I was actually performing hajj in Mecca,’ Imran claimed.

Rushdie however rubbished Imran’s assertion. While taking a swig of goat’s blood from a human skull and letting out a burst of evil laugher, Buahahahaha, Rushdie said: ‘Immy was there at the castle enjoying a jug of skimmed milk and talking about the art of reverse swing with Joan Windstorm, the 23-year-old daughter of the Windstorms, and all the while Joan thought he was talking about transvestites in major league baseball.’

‘Nonsense!’ Said Imran when told about Rushdie’s claim. ‘It was whole milk and not at all skimmed.’

Imran added that Rushdie was quick to insult his (Imran’s) faith (i.e. white magic), but can he afford to ridicule the fairytale stories of the Holocaust of the Amazonian people?

In an interview he gave to famous Red Indian TV anchor, Barkha Two Horse Power Dutt, Imran said: ‘This does not mean that I am a Holocaust denier. I like the Amazonians because they are people of the book (i.e. ‘Dummies Guide to White Magic’). All I am suggesting is that just because the Amazonians have great influence in Hollywood and like to finance one-dimensional and biased flicks about those who do not like Shezan fruit juices, Rushdie will never even think about ridiculing them in his novels.’

Furthermore, Imran also contradicted Rushdie’s claims by confessing that it was not him who was the pioneer of reverse swing, but former Pakistani cricketer and heavy Shezan drinker, Sarfraz Nawaz.

‘Rushdie should know this because Sarfraz too became a devil worshipper,’ Imran said.

But Rushdie continued to insist to the reporters that he did meet Imran and had long conversations about reverse swing bowling, the need for neutral umpires, Duran Duran’s fashion sense and Lady Windstorm’s inexplicable admiration for Ian Botham’s flabby frame.

Rushdie, while sticking pins in a voodoo doll that uncannily looked like an 1880 version of Imran, said: ‘Imran also met former Libyan dictator, Colonel Qadhafi, at the Windstorm’s castle. In fact, Qadhafi offered him $10 million to work as his double.’

Imran agrees that Qadhafi made the offer, but says that the offer was not made at the Windstorm’s castle, but during hajj.

‘You can ask the camel that accompanied Qadhafi when he came to meet me at my tent there,’ Imran said.

When some media personnel travelled to Saudi Arabia to meet the camel they were told that the camel was executed in 1987 by Saudi authorities for showing affection to a female camel in public. Its meat was then donated to Pakistan.

The Imran-Rushdie saga is far from resolved. In fact it is set to further flare up once Rushdie publishes his book. Interestingly, authorities in Iran have already started to organise book burning events in which notebooks with ‘Satanic Reverses’ scribbled on them (with pencil) are being hurled into the fires.

In Saudi Arabia, almost two hundred female camels were recently executed after they were accused of driving their own carts and thus practicing black magic.

In Pakistan, Hafiz Saeed & The Rocking Missiles have planned to hold peaceful anti-Rushdie concerts and release a song (written by former I As I chief) to raise funds for Imran’s election campaign. The song is called ‘Aman Ka Pasha.’

In Britain, the Windstorms who were implicated by the Scotland Yard for their role in the assassination of Prince Charles’s favorite horse, Nigel, have vowed to back Rushdie’s claims by helping him turn his book into a Bollywood blockbuster called ‘Kabhi Rushdie, Kabhi Dumb.’

The Amazonian lobby in Hollywood has also shown interest in financing the film but only if it is allowed to add meaningless footage of Amazonian warriors slaughtering defenseless Babylonian men, women and children in the film.

Members of Duran Duran however have announced that they want nothing to do with Rushdie anymore. In fact, they are said to have joined the London chapter of the Tableeghi Jamat, given up music and opened a series of halal fashion boutiques in the Pakistani city of Raiwind.

Nadeem F. Paracha is a cultural critic and senior columnist for Dawn Newspaper and Dawn.com