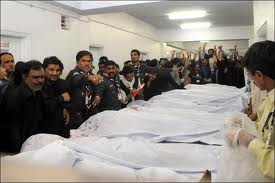 My mother can never forget the gloomy day of 10th of Muharram in the year 1963 when the dead body of her brother was brought home. He was among the hundreds of Shia Muslims slaughtered while commemorating Ashura in Theri, a suburb of Khairpur, Pakistan. Suicide bomb attacks not having been introduced back then, the perpetrators made use of axes and swords to complete their “divine mission’’. It was probably the first ever planned and organised attack on Shia Muslims in the history of Pakistan, but definitely not the last. Forty-seven years later, Pakistan has a long list of such incidents, where Shia Muslims have been the main victims. Strikingly, these attacks are always referred to as “sectarian violence”.

In Pakistan, in the wake of every terrorist attack, the term “sectarian violence” is widely and frequently used by most of the analysts in the mainstream media around the world. Whether it is BBC, CNN, Al-Jazeera, VG of Norway, Jang and Geo News of Pakistan or free-lance bloggers, the “nuanced” view is that these attacks on Shia Muslims are sectarian violence. Having been grown up in Pakistan, I have always struggled to digest the term “sectarian violence”. In this blog, I have tried to analyse the usage of this term and its potential repercussions on the Pakistani society.

As a matter of fact, there is no sectarian violence going on in Pakistan. It has never been the mainstream Sunni Muslims who turned against the Shia Muslims and engaged in their killings. On the other hand, during the last decades, Shia Muslims have not been involved in any organised retaliation to Sunni Muslims either, not even in the immediate aftermath of any attack on them. Who are the culprits, then? I have frequently observed that each time Shia Muslims are massacred, the act is “condemned” by the government officials, most political analysts and majority society members as a heinous act committed by those who are ’’not even humans, let alone Muslims’’. At the same time, the media calls it “sectarian violence”.

It is not sectarian violence that the Pakistanis are experiencing. Simply put, I believe it is a “gradual genocide” of Pakistani Shia Muslims being carried out by a fraction of ”Muslims” who are quite frequently disowned by majority of Sunni Muslims. Instead of objectively describing a reality, the use of the term “sectarian violence” may worsen the situation as it suggests that both Shia and regular Sunni Muslims have a share in it. This may lead to the idea that violence by one needs to be compensated with violence by the other. But the key questions are: who benefits from it and who pulls the strings of the perpetrators? The answers can be obtained by holistically looking at the current global political situation, in particular in the areas around Pakistan.

Moreover, we have to address the following questions as well: Which global powers would like to see Pakistan ending up in a Beirut-style civil war? Who are safeguarding their interests in the region? Do the allies of these powers have vested interests in Pakistan? What are the potential plans of these powers for the region and how does this violence help them obtain their objectives? We would have to answer these questions first before we can start to understand why all of this has been happening in Pakistan.

Pakistan has never before been in the need of harmony and unity between the Shia and the Sunni as much as now. Shia clergymen and other Shia leaders in Pakistan have so far urged their followers to exercise restraint in order for preventing the real sectarian violence from happening. Different organisations of Shia Muslims in Pakistan usually keep their responses to only peaceful protests. This is also a fact that almost all the Shia Muslims of Pakistan believe in unity, harmony and brotherhood with their fellow Sunni Muslims. The sad part however is that the majority society is not reacting to the Shia killings the way they should. They are not even acknowledging the ongoing Shia genocide in Pakistan, let alone openly condemning it. Nevertheless, a few analysts and experts have started to acknowledge it and condemn it but they can be counted on fingers.

With the recent surge in genocide of Shia Muslims in Pakistan, one can only hope that the Shia leadership can keep its youth following a non-violent strategy.

[ Dr. Nakvisson is an energy engineer and a free-lance journalist based in Norway.]