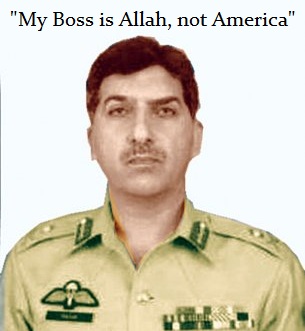 Lieutenant-General Ahmad Shuja Pasha (born 18 March 1952), the current Director-General of the Inter-Services Intelligence (ISI), Pakistan’s premier intelligence service since October 2008 is due to retire on 18 March 2012. He will be replaced by Lieutenant General Zaheerul Islam.

General Pasha was due to reach the age of superannuation on 18 March 2010, but having received two extensions, his tenure was extended until 18 March 2012. He was recently named as one of the 100 most influential people by Time Magazine.

Prior to his appointment as ISI chief, Pasha served as the Director General of Military Operations from April 2006 to October 2008 at the Army headquarters overseeing all military engagements in Waziristan, Swat and other tribal areas.

He is the main mind behind the good Taliban-bad Taliban theory, the creation of the Difa-e-Pakistan Council, Imran Khan’s PTI tsunami, and the reinforcing of contacts between Pakistan army and Jihadi-sectarian groups (Taliban, Sipah-e-Sahaba, Jamaat-ud-Dawa, Jaish-e-Muhammad etc).

During his tenure as ISI chief, from October 2008 to March 2013, General Pasha proved himself as an incompetent officer. Thousands of Shia Muslims, Sunni Barelvi Muslims, Pashtuns and Balochs have been killed during his tenure, many of them by various assets and Jihadi-sectarian proxies of the ISI (extremist Deobandi Taliban, ASWJ-SSP, Jundullah). Dozens of Ahmadis and Christians were killed in the same period. Osamab bin Laden was hiding in an ISI-safe house in tenure in the garrison town of Abbottabad. Mumbari attack was his first gift to the international community. Pasha also kept influencing police officers and judiciary in various provinces and areas of Pakistan in order to to ensure safe release of Taliban and SSP-ASWJ terrorists arrested by the police. He is the same man who unsuccessfully tried to topple the elected government by hatching the memogate conspiracy with Mansoor Ijaz. He was also involved in the JuD-LeT’s attack on Mumbai in 2008.

Here’s a damning article on General Pasha by Hamid Mir. Of course Hamid Mir is paying back to Pasha because it was ISI which released secret tapes of Hamid Mir’s conversation with a Punjabi Taliban a few years ago. Hamid Mir himself is an MI loyalist thus the element of professional jealousy should also be kept in mind. (Of course, Mir will not write any such column against the commander of MI or the COAS because that would mean a violation of the chain of command.) Yet, it is hard to disagree with Mir’s views and analysis of Pasha’s performance.

Click here to post a comment
Equality of citizens: Common sense that’s not so common! – by Dur-e-Aden
An open letter to Sharmeen Obaid-Chinoy – by Ravez Junejo