Before I move on to the main theme of this post, I must clarify its purpose as not being the blind adulation you have received from some quarters at your Oscar win.

I wish I could have been part of the horde of your (Karachi and Lahore based) friends and supporters who tweeted and blogged their admiration, enthusiasm and sheer happiness at your Oscar win.

But being a diehard follower of the Pakistan Peoples Party and a supporter of the martyred former premier of Pakistan, the Muslim World’s first female head of state and most successful politician and international stateswoman, Mohtarma Benazir Bhutto Shaheed, I am sure you understand the grievance I hold against you for your role in the insult meted out to my leader in the guise of ‘freedom of artistic expression’ at the Shanakht (Identity) Festival of 2009. An insult meted out LESS THAN TWO YEARS after her brutal martyrdom in Rawalpindi in 2007. When the PPP workers had physically protested that explicit insult in 2009, I had publicly supported their protest right back then (http://groups.yahoo.com/group/cmkp_pk/message/14633) and contrasted your irresponsible oversight for our leader with the fear your kind hold for leaders of a Karachi-based political party or the heads of Pakistan’s fearsome military and intelligence agencies.

I also remember how you suspended your event a day later and raised a hue and cry about how people cannot tolerate a difference of opinion and also how you now FEARED FOR YOUR LIFE?! All because a few PPP workers had rightfully protested a picture demeaning our martyred leader that YOUR organisers REFUSED to remove when first requested to do so! That picture, which I saw for the first time a few days ago in a post on Pakistan Blogzine, was ABSOLUTELY worthy of the response it got! These are the very contradictions of your Oscar award which have been eloquently described by a fellow blogger, Safiya Khan.

But I may be wrong. What do I know about provocative artistic expression?! Maybe this is how arty types in your circle express their feelings about people they detest for some reason. With that motive in mind, I would like to offer this picture below for submission and display at the next Shanakht Festival that is to be held under the auspices of your Citizens Association of Pakistan. It is an expression of my heartfelt emotions at your recent achievement, keeping in mind the aesthetic and provocative artistic sensibilities you apparently value at CAP.

I hope it does not disappoint! 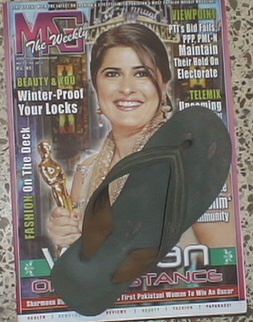