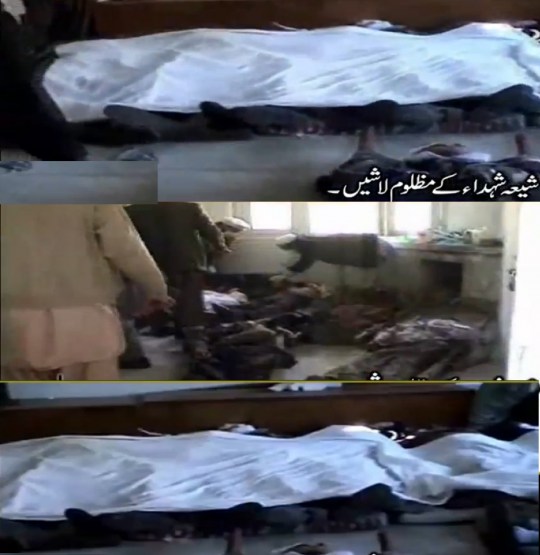 It took the screams of a young woman being beaten in Swat to galvanise the country and the army to take a stand against the gruesome cruelties inflicted by the Taliban on the local population. Till then a sense of ennui, national indifference, if you like, had trumped worldwide horror that Swat had fallen into in the clutches of the Taliban.

Will the Kohistan massacre of Shias on Feb 28 arouse similar revulsion and act as a spur to equally decisive action on the part of the government? Fat chance.

When an identical massacre of Shias occurred in Mastung last year nothing much happened and so too, the killing of Shia doctors which has continued sporadically for years. Worse, there has been precious little by way of an effective response from the authorities. Of course, Rahman Malik does promise to rain fire and brimstone on the killers.

The fact is we have become inured to violence, especially in far off “no go” areas of the country, like Fata, Gilgit-Baltistan and Balochistanwhere it is now endemic. And unless we rouse ourselves to wrestle with this evil revenge attacks and further bloodshed will continue. What is it that drives Jundullah (Kohistan) and Lashkar-e-Jhangvi (Mastung) which eagerly claim responsibility for the Shia killings to act as they do?

According to Tawfiq al Rubaie, spokesman of Ayatollah Ali al-Sistani, the leader of Iraqi Shias: “They think that Shias are infidels and Shia lives, money and women are permissible for them to take, and that killing Shias is one of the requirements to enter paradise.”

Such hatred is not susceptible to reason or argument. Actually, to think anything will cure such madness would itself amount to madness. Hence, the only answer is for the state to take them on with no quarter given.

There are no signs of this happening. On the contrary, Shia-hating psychopaths are becoming increasingly brazen. They move about in Fata as if they had a free pass from whomever.

Condemning the Kohistan killings the UN secretary general said he “stands by” Pakistan’s efforts to combat such terror. We should be worried. From “stands by,” to “urging” or “calling upon” Pakistan to end the killings will be a small but important step. The latter would suggest we are either helpless to prevent atrocities or will not, for whatever reason, and that would amount to an open invitation to outsiders to come to the help of groups they feel are being victimised. In a sense that is already happening judging by dollops of assistance rival sects are receiving from abroad.

A state that cannot protect its citizens from random violence and butchery cannot have a claim on their loyalty. History teaches us that whenever people suspect a lack of resolve on the part of the state in fighting crimes, a revolt is never far away. By the looks of it we are at such a juncture.

Islamabad really has no choice: the freaks and the organisations which hunt down Shias and Sunnis must be eliminated and effectively shut down or else the resulting strife will make the ongoing fighting in Balochistan seem like a mere bar room fracas.

It’s was good, therefore, to hear Kayani offer the military’s cooperation to nab the culprits of the Kohistan atrocity. Not that anyone really thinks it will make much of a difference. Few killers ever get caught and only a fraction of those apprehended get to pay for their crimes.

We are facing this predicament today only because successive governments in Pakistan have treated the outlying regions of Pakistan as “no go” areas for development and especially education. Jinnah is praised for leaving alone to manage their affairs by withdrawing the army from Fata in 1948. But that didn’t mean they should have been left to fend for themselves even as the government poured funds into development of nearby “settled” areas. A policy of benign neglect when pursued endlessly becomes malign and, in due course, malignant.

In retrospect, depriving Fata of proper schools and of universities and the opportunity of becoming a part of the national political process, proved a lethal mistake. Criminality, gunrunning and smuggling has thrived for want of jobs, and so too guns for hire.

It was the Soviet invasion of Afghanistan which sanctified the marriage between vice and virtue or crime and jihad. Camps were set up to train, among others, extremists, murderers and criminals to become efficient killing machines. Their beliefs scarcely mattered as long as they could kill Russians. And then, of course, the Russians withdrew and the roof caved in.

Meanwhile, dictators like Ziaul Haq and weak civilian regimes which were perennially in hock to the Gulf statelets, acted much like serial debtors groveling before their creditors, making excuses for tardy repayments and promising to please their patrons, even as they craved their indulgence and a further fistful of dollars.

Worse, they allowed in foreign preachers and stood by as these imports doused Pakistan with their message of hate and intolerance. So much so that the deadly virus of extremism is now out of control.

It is not for nothing that we are viewed today as the fount of terror the world over. Only the other day in Slovenia, the factory owner of a local telecommunication company was scolded by the national secret service for receiving a delegation of Pakistani officials. And it isn’t a coincidence that no country in the world allows a Pakistani without a visa to enter, his passport, whether Official or Diplomatic, on its own, being insufficient. Frankly, we live in a dangerously dysfunctional state ever in dread of what the morrow will bring and what dark menace it may hold.

As for our extremists they possess an exceptional and almost pathological constitution. They make for excellent martyrs as they have a natural penchant for “shahadat” (martyrdom). Except that they seek to earn that glorified status not by killing the aggressor in war but by killing fellow citizens of another sect because that way they believe their deeds will get more purchase with heaven. In fact, all they achieve is to enable outsiders to denigrate Muslim society as mediaeval and barbarous and assign a far higher worth to non-Muslim lives than Muslim, as we have seen in the wars in Iraq and Afghanistan.

It is much too late to fiddle around with their genetic code. However, no elaborate rewiring is required to persuade the millions of decent Pakistanis that unless the psychopaths who murder on account of sect or faith are stopped, the collective punishment all of us will have to bear will be more than what we can withstand.

True, it’s much too ambitious to expect that we can return this country quickly to the path of a tolerant and progressive Islam that Jinnah had envisaged. But at least we can hope to reclaim our place as a civilised state in the comity of nations. That will be good enough for the moment, anything more would be a bonus.

The writer is a former ambassador.