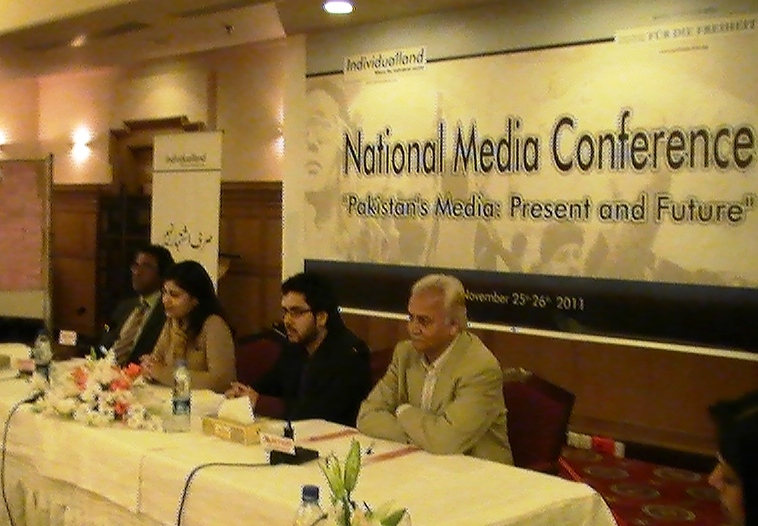 Individualland Pakistan (IL-Pakistan) is an active non-partisan, not for profit registered civil society group. Since its inception, IL has worked on pertinent issues in respect to governance, rule of law, media communication skills, strengthening civil society and democratic development. It is actively engaged with the Pakistani media. This engagement involves utilising the media as an ally for change.

IL-Pakistan has launched its new publication on conflict sensitive journalism in the most dangerous areas in the world to work as a journalist; Balochistan and Khyber Pakhtunkhwa. It is available online in PDF format on IL-Pakistan’s website.

IL-Pakistan has released this report after conducting a long series of training workshops,discussions and consultation meetings with media persons, especially from conflict areas of Pakistan, one of the high rates in the world for journalists killings, and where correspondents and reporters has been subjected to kidnapping, assault and harassment.

The report says that the media in Pakistan today is on the forefront of conflict without much safeguards.

The report describes Pakistan as one of the most dangerous countries in the world and the volatile situation in the country has affected the freedom of journalists and the media, since the threat of terrorism has now also pulled them into the midst of the conflict.

The preface of the report states:

Pakistan has been engulfed in a conflict since a decade, which has been focused in the areas of Khyber Pakhtunkhua and Baluchistan. Being at the forefront in the war on terror, its proximity to war torn Afghanistan and the influence of major players in the region, Pakistan has witnessed the worst affects of the conflict. More than 37,000 casualties have been reported in conflict related violent incidents, throughout Pakistan in the past ten years . The mentioned provinces have been facing the brunt of this violence, as militants and security forces have been fighting for control.

In this conflict, local residents and civilians have been affected the most. The deterioration in the situation has been fueled by radicalization, ethnic divide and intolerance in the society.

The role of media is to provide information to the citizens, in order to assist them in reaching an educated opinion. During conflict this job becomes more important and perilous for the media, as they have to report while keeping the sensitivity of the situation in mind. Conflict sensitive journalism promotes the role of journalism to assist in a resolution of a conflict, by presenting the views of every concerned party and act as a channel of communication. Conflict sensitive journalism is a concept, where media can contribute towards good governance, safeguarding human rights, peace building and resolution to a conflict.

It has to be realized by the journalists that they are operating at a considerable risk, not only to themselves but also to their family and counterparts. So, any mistake can lead to serious consequences and potential threat to their lives and the lives of others. It is important for the journalist to survive another day, rather than become a hero.

Historically, Pakistani media has suffered censorship and hurdles at the hands of state. The media in Pakistan has gone through a tremendous revolution, during the past ten years, especially in the electronic sector, where there used to be a state monopoly. More than hundred radio and T.V. channels are being viewed across the country, while there has also been an increase in the number of print and electronic media consumers .

Pakistani media has not only experienced a mushroom growth in numbers, but has also gained considerable independence during this time. Realizing the effectiveness of the media, the parties involved in conflict have been engaged in influencing the media. The journalists and reporters operating in conflict hit areas of Khyber Pakhtunkhua, find themselves caught between the security agencies and militants, which has also resulted in journalists themselves becoming a target of violence. In addition the media
personnel active in conflict zones lack proper training and resources to deal with the situation at hand. According to the International Federation of Journalists (IFJ), a total of 15 journalists were killed in Pakistan, during the year 2010.

Realizing the need to engage the journalists of both urban and rural areas of Khyber Pakhtunkhua and Baluchistan, in sensitizing them over conflict sensitive journalism and highlighting the problems faced by them in conflict zones, an initiative of one year (February 2011 – January 2012) was carried out by Individualland Pakistan (IL-Pakistan) with the assistance of National
Endowment for Democracy (NED).

A series of nine trainings were conducted for sixteen districts of Khyber Pakhtunkhua and Baluchistan, where a total of 225 journalists, 97 from Baluchistan and 128 from Khyber Pakhtunkhua participated in the sessions. These areas were mostly neglected in the past, mostly due to the volatile security situation in the provinces and difficult accessibility.

Initially the project focused on Peshawar, Charsadda, Mardan, Nowshera, D.I. Khan, Kohat, Mingora, Mansehra, Tank, Upper Dir, Buner, Quetta, Gwadar, Turbat and Chaman. The organization took this project further by extending it to seven other areas on the basis of need assessment and demands of journalists.

For the first time journalists at the border region of Chaman were trained in Chaman. This not only broadened the outreach of the organization, but created a positive impact among the journalist community, where they took interest and ownership in the initiative. Assistance was acquired from local press clubs, journalist unions, subject specialists and senior journalists, throughout the
course of the project. Even the local administration was taken into confidence regarding the objectives of the project.

During the implementation phase of the project, we found the journalist community to be very cooperative and forthcoming, regarding the predicaments they have been facing during the course of their jobs in conflict zones. Certain issues which previously remained out of sight and were not anticipated also surfaced during the project, as the organization interacted with the media personnel.

This included the rivalries which exist between various press clubs, where rival groups were not ready to even sit together at the same forum. The issue of job security, lack of equipment and resources, meager salaries and absence of a training mechanism, on behalf of the respective media organizations were the top most concern of every journalist.

The journalists were of the view that the management was not aware of the ground situation and were no taking any serious measures to deal with the problems faced by them in the field.

IL-Pakistan also worked towards addressing some of the concerns faced by journalists. Although, not part of the original plan, but the organization also developed liaison with the Red Crescent to provide journalists with first aid kits, as per their demands. There was also the issue of demand by journalists in Khyber Pakhtunkhua for compensation on attending the workshops, which is a
common practice by other organizations. This proved to be a difficulty and as the organization considered it unethical, the demand was not met. Another issue which was highlighted during the initiative is the low number of women in the media sector of Khyber Pakhtunkhua and Baluchistan, mostly due to the social and cultural taboos surrounding jobs, considered to be unconventional.

“A Camera is insured but the cameraman is not” somewhat summarizes the difficulties faced by the journalists and their reservations from the senior management.

The conclusion which has been drawn at the completion of the project is that there is a pertinent need to involve the owners and senior management of media houses, who develop and implement policies, which affect these journalists at ground level.

Associations of owners, such as All Pakistan Newspapers Society (APNS) and Council of Pakistan Newspaper Editors (CPNE), should be engaged to take the appropriate steps, to provide assistance to their media personnel in the field.

This publication is also an assessment and analysis of the significant elements of reporting in a conflict situation such as responsibility, impartiality and accuracy, as these were prerequisites for reliable journalism.

The report suggests there are various kinds of conflict and journalists should be aware of the environments they could be placed in and there is a need for an institution to train journalists who could report from conflict zones. It also stresses on developing a code of conduct for journalists working in conflict zones, along with standardising safety procedures that could help them survive in a conflict zone.

You can read/review and download the full report from the following link:

Journalism in conflict areas of Pakistan