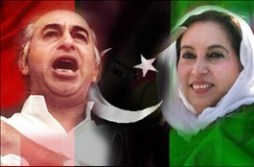 While glancing into the history of Pakistan’s politics, the first and prominent name that you find in the endeavor of genuine democracy is – Pakistan Peoples Party (PPP), which is not only a name but also an incessant struggle, a story of blood and a relation between the leadership and its ‘awaam’. However, nothing can divorce itself from the fate, PPP has lost many of its leaders, but still stands firm against all the conspiracies and altercate to let all comprehend and differentiate between the right and wrong; fair or prejudice. The leaders of Pakistan Peoples Party would always be extolled as the pioneers of democracy for their stupendous exertion in the rehabilitation and restoration of democracy. No political dynasty can ever be examined in contrast with the leadership of PPP – The Bhutto Family, which has been sacrificing all its generations to change Pakistan from wild and wooly to a civilized and legitimate country.

When it comes to ballot, there prevails the only name ‘Pakistan Peoples Party’ and accordingly, after sweeping the general elections ’08; it is now, the ruling party of this country. Nevertheless, where there are champions, there are also some losers, who, instead of accepting defeat as the consequence by fate, emerge to play the roles of villains. Being tired of hearing that this government is going to be abolished soon, I had had an opinion in its very early days, that there must be a strong answer to such political orphans who are always active to speak up with their baseless assumptions in order to topple PPP’s government and disparage its contributions. The government, which has been achieved by sacrificing young bloods, how can one think to dismiss it? Let bygones be bygones, it would waste a lot of time if I start to pen about all the conflicts. The most important thing is that yet again, Pakistan People’s Party has shown its strength to the world by striking with a great force in the last year of its tenure, especially at the time when some of the institutions were about to join their heads to defeat this people’s government. Nevertheless, all of the enemies got a tight slap and PPP failed all their plans by sweeping the By Polls and Senate elections ’12.

Some misanthropes used to say that PPP got majority in general elections ’08 in the name of Shaheed Mohtarma Benazir Bhutto and gained the sympathy of public, to those, I question that what about current victories, are these also linked to sympathetic response from the nation? If people were too discontented and dissatisfied with the leadership, they might have rejected the party! They voted because of President Zardari and showed their confidence in him; voted for all the efforts made by the current government in the past four years; voted to lift up their party against the fake ones. Am too sad for all mentally retarded people, they would surely be on pins and needles – after this victory. Especially, the enormous victory in by-polls is the vengeance from all those traitors who left PPP for their own expediency. PPP was determined to acquire these results despite of all the criticism because “there is a will there is a way.” Though this victory seemed implausible to the criticizers, it in fact turned out to be true.

How the world turns, one thing never changes – the ambrosial relationship between the leadership of PPP and the people of Pakistan. No matter – how the winds flow across, trust of nation gained by PPP, can never be snatched by any opportunist. PPP is and will always be the first choice of people because of its vision and legacy, put forwarded by the hero of awaam – Shaheed Zulfiqar Ali Bhutto, flourished by the martyr of democracy – Shaheed Mohtarma Benazir Bhutto and now, carried on by Mard-e-Hur and the President of Pakistan – Asif Ali Zardari. This is not understandable that what criterion the criticizers use while abusing PPP. It is much indeed to be regretted if they are unaware of the achievements of this Govt. Whether you talk about restoration of constitution in its original form or empowerment of woman, no government has ever actualized the perceptions as much as PPP has. Despite overabundant external/internal pressures of many institutes and agencies, it has delivered so much that the previous governments could not and doubtlessly, it has obtained so, by following the vision of Shaheed Bibi in real means. The military, judiciary or presidents had always sacked PPP’s governments, but this is the only tenure in the history of Pakistan, when PPP has not allowed any other institute to interfere or jump into the matters of state. However, media does not consider itself bound to follow the rules or regulations and misuses the policy of PPP about the freedom of press, which is the only bad aspect of our media.

If a political party does not have its foundation in the determination to advance a moral cause, then it is not a political party; it is merely a conspiracy to seize power. PPP has a profound legacy to work on. The Benazir’s party is now converting her dreams into actualities through various projects of development of Pakistan. These elections are not the ‘only’ victories of PPP, Bhutto and Benazir win when any poor is benefited from the policy of government; any project for the development is started; any woman is empowered through BISP or any bill for the advantage of nation is passed from the assemblies. The victories of our martyred leaders – go on and on… Day by day, an ordinary man is being empowered through several bills and constitution is being restored by several amendments.

Those, afraid of speaking in the favor of their beloved party must wear their hearts on sleeves; break the ice; kill the conspiracies that intend to hide the truth; reveal the realities. This is not the time to remain silent, come out of your shells and make the world aware of actualities.