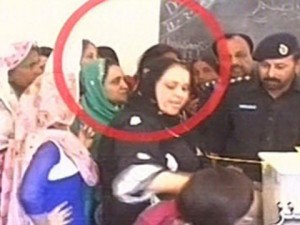 When a woman hits another woman, in normal cases it’s an assault. If there are many witnesses, good, the assailant gets punished quickly. Open and Shut case, we move on. But Pakistan doesn’t do normal; even our assaults have deeper meanings and ramifications behind them.

The Act
When the, now MPA, Waheeda Shah slapped an on duty election official. This was uncalled for, even if the official had herself placed ballots right in front of the candidate. Violence is never acceptable. What makes the situation worse is that only reason Ms. Shah did slap the officials is because she has this sense of entitlement. As she belongs to a higher caste, being more socially higher and is much more affluent, she felt she can slap her lesser. This is not new or radical and happens almost regularly. What was different is that whole incident was caught in camera and televised throughout.
As always, the very elite who batter their lesser on daily basis woke up as horrified as to what they were seeing. Much like when you see yourself on the video taken by someone else, is that how I look? Only that no one here seems to recognise themselves and have started to prepare a pyre to burn that witch.
Some members of Sindh found it unbearable to sit with such a woman. Oddly no one found it unbearable when the then CM Arbab Rahim slapped people, with same contempt and sense of entitlement.
There is an immediate need to bring about a change in attitudes of the more affluent to treat others with respect. There is very little of this in our society.

Waheeda Shah was running on a general seat. She eventually won her election, making her only the second woman to win on the general seat in the Sindh Parliament. An important milestone for woman of Sindh, one might say, yet ironically this is a woman who has beaten another weaker woman in public, just because she could!
The Suo Moto
Influenced not at all by media rampant reporting and any personal grievances, the Chief Justice of Pakistan promulgated a Suo Moto action against the now elected MPA. Everytime a Suo-moto is taken by the highest court in such a fashion, the due process is severely affected. Trying to explain such intermediation, in the while where there was already an FIR lodged; CJP stated that to him this incident was worse than cold-blooded killing of a boy by a trigger happy Ranger official. Perhaps he meant the underlying social issues that lurk within the slap, but he made no mention of them. He did mention that this showed inadequacy of the Election Commission to provide full security and showed lack of security to public official, though Suo-Moto was taken on this one incident and not on other incidents of shootings that also occurred in Punjab. No wait, sorry I forgot slapping is more harmful than guns. Suo-Moto wasn’t also on overall lack of security provided by EC, with all the incidents that happened that day. It was for that one slap, by a PPP MPA. Incidentally no Suo-Motos for the killings of many Shias.
A better way may have been to advice a session court judge and Sindh IGP to direct the investigations to ensure no influence is done. It is not a perfect scenario, but if the CJP wants there to be a structural change then he should at least let law run its course, for once.

The Apology and the Forgiveness
When Waheeda Shah was shown the video of her actions, she apologised for it. She also sought apology from the Chief Justice at the Suo moto hearing. This did not end the case, and the hearing was said to continue for next date.
Subsequently the official who was slapped by the Waheeda Shah came out with a statement, saying she forgives her assailant after former had apologised. After this the Election Commission decided to close the case. Similarly the FIR too would now be in jeopardy. Similar to case of Raymond Davis, being freed after family of his victims forgave him. Oddly enough while following the Islamic injunctions, Waheeda Shah would have no case against her, but the Suo Moto is not based on any Islamic injunctions but has an underpinning in the common law. These proceedings can still continue, as they are independent of the victim’s right to seek redress. This is odd because Islamic provisions in this case allow the MPA to go free, yet the SC court that has expressed high regard for ensuring and introducing Islamic law and principles, would be using common law to redress the situation, to come to a conclusion as they see fit.
As I said, it’s not a normal assault – we don’t do normal.