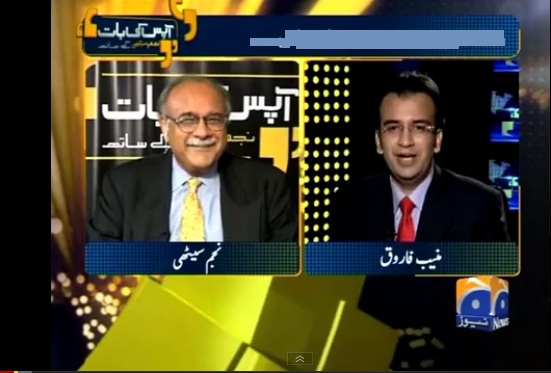 Traditionally lifestyle liberals in Pakistan use an 80-20 mixture formula, i.e., they inject the 20% pro-military establishment discourses within the 80% objective facts or neutral assessments in their articles. Of course we agree with the 80% of their content, however, it is the 20% part (e.g., Taliban = Pashtoon, or, sectarian clashes between Sunnis and Shias, or, involvement of RAW in Balochistan, or, politicians are corrupt etc) which makes them more refined, opaque and dangerous than their right-wing affiliates of the Deep State.

In the first few minutes of the program, Najam Sethi identified major players and factors behind Shia Muslims massacres in Pakistan and highlights the unholy link between SSP-ASWJ and Al Qaeda. This (80% segment) is good because it challenges the so called analysts who misrepresent genocide of Shia Muslims as a proxy war between Iran and Saudi Arabia. However, Sethi went off the track when he said violence in Pakistan started with the import of Iranian revolution in late 1970s.

However, resorting to his tradition of 80-20 mix (mixing 20% of disinformation in 80% of information), Sethi used Sunni-Shia sectarianism terminology to hide the fact that ASWJ-SSP terrorist represent their mentors in Pakistan army, not Sunni Muslims.

In the latter half, he deemed it fit to allow his program to be hijacked by SSP-ASWJ’s leader Ludhianvi.

Instead of speaking to the slain community (Shias), Sethi deemed it fit to speak to their killer, Ahmed Ludhianvi, allowing him to freely relay his propaganda and hate on international circuit.

Why does not he ask Ludhianvi why he went to receive LeJ chief Malik Ishaq from Kot Lakhpat if he does not endorse LeJ’s terrorism?

Taking lead from Najam Sethi’s dishonest misrepresentation and dilution of Shia genocide in Pakistan, several authors in The Friday Times (chief editor: Najam Sethi) have published misleading and non-representative articles in the current issue (March 2-8, 2012) of the TFT. A detailed criticism of TFT can be read at the following link: The Friday Times misrepresents the suffering of Pakistan’s Shias and Ahmadis. 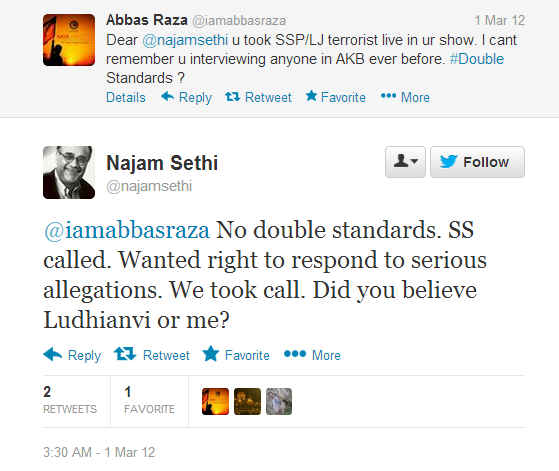 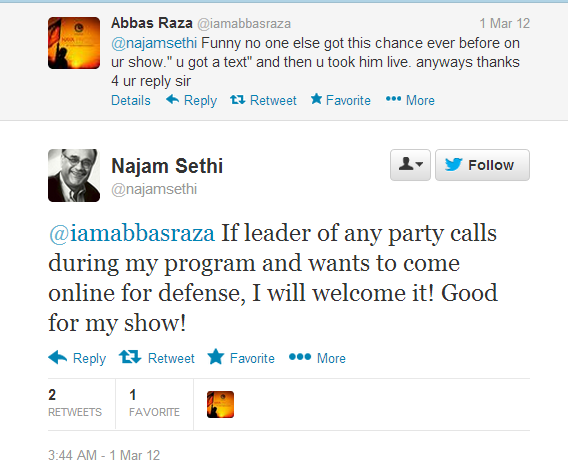 Abbas Raza ‏ @iamabbasraza
Dear @najamsethi u took SSP/LJ terrorist live in ur show. I cant remember u interviewing anyone in AKB ever before. #Double Standards?

Najam Sethi ‏ @najamsethi
@iamabbasraza No double standards. SS called. Wanted right to respond to serious allegations. We took call. Did you believe Ludhianvi or me?

29 Feb Abbas Raza ‏ @iamabbasraza
@najamsethi Funny no one else got this chance ever before on ur show.” u got a text” and then u took him live. anyways thanks 4 ur reply sir

29 Feb Najam Sethi ‏ @najamsethi
@iamabbasraza If leader of any party calls during my program and wants to come online for defense, I will welcome it! Good for my show!

Najam Sethi self-congratulates himself on his brave stance on ‘sectarian violence’. Hey, you forgot Farhat Taj, Dr. Taqi, Mehmal Sarfraz and quite a few others!

Najam Sethi ‏ @najamsethi
@Nauman_789 I had said more against SSP in ten mins than anyone in ten years! Least I could do was allow them defensive response. Fair?

Jhangvi media cell celebrates the fact that their terrorist leader was allowed to speak on national circuit in Najam Sethi’s popular program:

This is not Sunni vs Shia Sectarian Violence

Hamid Mir and Najam Sethi in their programs and several authors in Sethi’s The Friday Times used the Sunni-Shia sectarianism discourse which is tantamount to misrepresentation of Shia genocide.

This is not Sunni-Shia sectarianism! Allama Taqvi speaks to Metro TV: