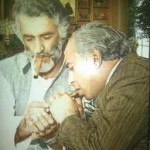 As you aware that I was hanged by the Pakistan’s Punjabi-Muhajir judiciary on instructions of an Arain General who I thought was loyal to Pakistan and promoted him to the rank of chief of army staff.

I was trialed in Punjabi courts and hanged in Rawalpindi. Actually the elite capitalists, rigid Islamists, Pakistan Army and feudals took a revenge and killed me by using Punjabi courts.

Revenge for what? I wanted to see a secular and democratic Pakistan, wanted to empower poor civilians, women and indigenous enslaved communities in various provinces and regions. You remember that during PPP’s government we had abolished the Sardari system through an ordinance. Through abolition of the Sardari System I wanted to liberate poor homeless and tenants who were enslaved by Sardars (tribal chiefs). The Sardars used to extort tenants through Shashak system.
You are aware that my two sons were also killed. They both could not use Pakistani airports to go outside the country like you people. They went abroad through Afghanistan’s mountains but my loving daughter stayed in Pakistan to fight with Punjabi judiciary, Punjabi army and Punjabi-Muhajir elite. What happened? They killed my daughter in the same city where I was hanged.

Why she was killed? My brave daughter had married a brave Baloch of Sindh. It is a fact that if would have seen dead of body of my dearest daughter Pinki, I would have surrendered before rigid Islamists, Pakistan Army and elite but my brave son-in-law never surrendered and decided to continue fighting for a united, democratic Pakistan and rights of poor.

Akbar Khan Bugti was my good friend and now he is with me. Akbar Khan never wanted to dissociate from Pakistani federation and he was determined to fight for his people and democratic Pakistan. You know that Nawab Akbar Khan became an authorized Sardar in 1944 and he implemented social and administrative rules on the tribe. He freed all Marhata slaves and acknowledged their “Siahakari” honor killing and made honour money payable to them. Akbar Khan was a reformist thats why he was killed. I do not like to remind you of the military operation during my government (which was imposed on me by the same military which had previously started the same opeartion in 1948) but Akbar Khan was the governor of Balochistan at that time.

However, my son-in-law realized the facts and wrong decisions of the military operation in early 1970s and he apologized to the Baloch nation in 2008 when PPP came into poawer. He apologized to the Baloch just after Pakistan army-backed Jihadis were able to kill my dearest daughter, you know why? Yes, he invited you people to be united against the killer who killed me, Akbar khan, Pinki (Benazir Bhutto), Salmaan Taseer and thousands of innocent political workers, ethnic and religious minorities in Pakistan.

We are being killed by a bullet of a particular mindset. We have sacrificed a lot not for separation but for freedom. We need to do social reforms first to end slavery and social inequality which actually was the mission of people like Akbar Khan. I know that indigenous communities everywhere in Pakistan are being persecuted by invading warrior tribes.
Yes it is a matter of pride for me that soon after Pinki came to me, my son-in-law showed his determination to save Pakistan and said “democracy is best revenge”.

I know Balochs are brave and I am sure that they have capacity to continue Akbar Khan’s mission. They will defeat a bullet of particular mindset by converting Pakistan from a Jihadi-authoritarian military state to a people’s state and a democratic state.