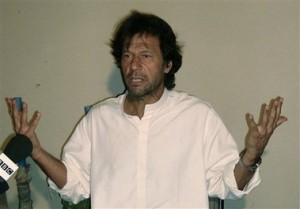 While some liberal fascists have cast doubt on Hazrat Imran Khan’s (HIK) intellectual prowess, they only need to read how the great HIK bowled out the scientists in his magnus opus “Why the West Craves Materialism and why the East Sticks to Religion” . HIK writes:

“Science had replaced religion and if something couldn’t be logically proved it did not exist. All supernatural stuff was confined to the movies. Philosophers like Darwin, who with his half-baked theory of evolution had supposedly disproved the creation of men and hence religion, were read and revered”

Whenever a liberal fascist, Shezan-swilling scientist -type like Professor Hoodbhoy shakes my faith by promoting such “half-baked” ideas such as “black holes, genes”, I revert to this HIK masterpiece to restore my faith in the Khilafat. In this excellent essay, Imran Khan firmly established Pakistan as the East and disproved the Zionist Imperialist neocon geographers who include the tiny Hedonist Buddhist Kafir states like China and Japan as the East.  I will not say too much about China as they are our brothers but really, they are not East; we, the descendants of Mohammad Bin Qasim are the real East.

Liberal fascist Hoodbhoy asks us to forgo our ghairat in his most Zionist imperialist neocon propaganda piece “Why are Pakistani students science-phobic?

“False pride and misplaced beliefs must be set aside. Eating humble pie is never easy, but surely this is a small price to pay for having scientifically smart Pakistanis in the future.”

How shameless can be he be? We all know how Ibne Sina and Al Rushd were Rafzis   (Shias) and heretics. Should we not appreciate the Khalifa who ignored them and listened to the Qazi-Judiciary instead.

Inshallah, HIK will never let this happen and he will protect our ghairat from Shezan-drinking liberal fascist types like Hoodbhoy. He has done this before when Hoodbhoy started bullying him and other pious, righteous Marxist comrades like Hamid Mir and Irfan Siddiqui. Watch this clip, especially from the 3:20 mark to see how HIK defeats Hoodbhoy intellectually.

Seeing this clip made me realize what bullies liberal fascists are and how Hoodbhoy, his imperialist ego and his Zionist Super Ego ganged up against gentle and humble Islamo Marxist scholars such as HIK, Irfan Siddiqui and Hamid Mir.  When I read how Prof. Hoodbhoy tried to assault all of them physically during the interval, I cried for days and confined myself to the sparse settings of my 4 acre hut off Lawrence Road.  Here is the account:

Articles like these by liberal fascists such as Hoodbhoy, Kamran Shafi, Marvi Sirmed and Nadeem Paracha are a direct attack on our Pakistaniat and Two Nation theory.  This struggle is a story of two Pakistans; one Pakistan consists of billionaire liberal fascist extremists like Hoodbhoy and Paracha.  This Pakistan wants to commit the murder of pure and beautiful ideas such as medievalism, literalism  and reactionary politics. The other Pakistan consists of pious judges, generals, journalists, Taliban, Sipah Sahaba and the pious HIK – this other Pakistan is the victim of liberal fascism.  Similarly, the liberal fascist Pakistan drinks elitest drinks like Shezan while the poor, underprevileged oppressed Pakistan represented by HIK, Mullah Omar and ISI drinks Halal Non-Corporate Marxist beverages – like how HIK promoted Pepsi in Pakistan.

Whenever such attacks come, I open my copy of Maulana Thanvi’s “Behishti Zewar” and once inspired, prepare the Pakistaniat brew to restore my faith:

The juice of an unripe Maudodi

A sprig of Azam Tariq (use only Sipah Sahaba variety)

A dash of JuD

A generous sprinkling of Fortress of Islam and Two Nation Theory

Mix all in a giant halal blender and puree until smooth. Drink in one go while admiring a portrait of Hazrat General Zia ul Haq (RA).  After this concoction, go to Pakistan Press forum and writing a blazing and poetic piece against corruption and liberal fascism.

In closing, I will quote Pir Falood to comprehensively debunk Professor Hoodbhoy and his half-baked ideas about this neocon Zionist thing known as science:

“We don’t need no education

We don’t need no though control