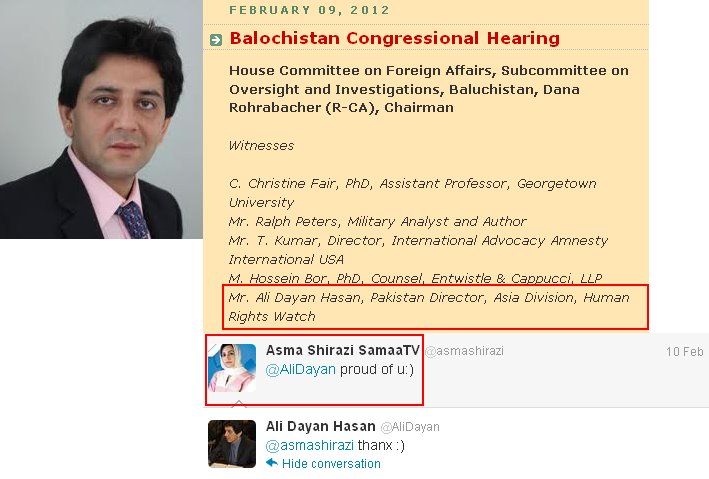 We at LUBP condemn yet another targeted incitement of vigilante justice Jang Group’s Ahmed Noorani, a notorious journalist belonging to Ansar Abbasi gang and links close to banned organizations like Hizb ut Tahrir and Sipah Sahaba Pakistan against the Human Rights Watch Pakistan’s Director, Ali Dayan Hasan. In its “report” published in The News and Jang on 21st February, 2012, Ahmed Noorani has done his best to castigate Ali Dayan Hasan as nothing but an American agent because he works for a “US Planted NGO”.

Moreover after being unable to get the views of Ali Dayan Hasan, Ahmed Noorani has done what he does best: publish the personal telephone numbers of people in the newspaper which is nothing but a breach of trust and privacy of a person.

We feel bad for Ali Dayan and wonder how many threatening and harassing calls and SMS he may have received till now. In ssence, this boils down to unethical behavior on part of Ahmed Noorani in particular and shows the level of editorial oversight at Jang and The News.

Ali Dayan Hasan has been at the receiving end of harassment and taunts from various sources ever since he came out openly against the role of intelligence agencies in the murder of Saleem Shehzad.

On 31st December, 2011, HRW had issued a press release giving its context of being a “supporter of an independent judiciary in Pakistan and advocated for the restoration of the judiciary ousted by Musharraf in Pakistan and abroad“, but at the same time they expressed their “concern about the fear of judicial over-reach and unwarranted intrusion into the affairs of the legislature and the executive“.

Taking their press release forward, they commented on “memogate” that “All parties to the memogate affair must understand that a legal dispute cannot be made the vehicle for truncating parliamentary or presidential terms through the backdoor or as a mechanism for subverting civilian rule“.

The News in its editorial of the same date had expressed their astonishment at the comment of HRW and a harassment of Ali Dayan Hassan and castigation of HRW began ever since in The News and Jang.

This report by Ahmed Noorani is damning towards the PPP government and not the Military and Intelligence Agencies on whose payroll or whose mouthpiece, he and his mentor are!

While it is sickening to read the report against Ali Dayan Hasan, we further express our support to him and all those who are trying to present the case of Balochistan internationally.

One must ask Jang Group that had you been doing your job of giving impartial reports on the situation in Balochistan, things wouldn’t have reached the international level. Don’t shoot the messenger, decipher the message that is being given!

HRW presented one-sided view on Balochistan to US panel