Constitution of a country is a social contract between citizens and the state. For people of Pakistan, a legitimate party to this contract, it is highly difficult to get an updated copy of the Constitution.

The president authenticated the 18th Constitutional Amendment on April 19, 2010 and the 19th Amendment on January 1, 2011, to make them operational part of the Constitution after their passage from both houses of the Parliament. Since then, many terms of the contract have changed and one party — the citizens — have little possibility to know about that.

The Ministry of Law and Justice and the National Assembly have printed a limited number of copies of the amended Constitution, but it is not possible for ordinary people to get hold of one. Private publishers have printed the post-18th Amendment version. After eight months, it changed as the 19th Amendment was passed in the light of observations made by the Supreme Court while entertaining over a dozen petitions against the 18th Amendment. Now again if the 20th Amendment is passed to provide legal cover to by-elections held under the incomplete Election Commission, then again an amended version of the Constitution would have to be printed.

However, it is easy to offer an electronic-version of the Constitution in the age of the much eulogised E-Government and cyber possibilities. Pakistani taxpayer foots the bill for E-Government Directorate housed in the Ministry of Information Technology. But unfortunately, majority of the official websites offer either pre or post-18th Amendment version of the Constitution. Surprisingly, the Official Gateway of the Government of Pakistan www.pakistan.gov.pk does not offer any version of this important national document.

The Gateway provides link to 37 federal ministries and 43 divisions. Out of these only three have full version of the Constitution. Shockingly, all the three are factually incorrect. The worst joke is that the website of Ministry of Law, Justice and Parliamentary Affairs (www.molaw.gov.pk), that is supposed to print an accurate version of the Constitution, offers only the post-18th Amendment version and that too has not acknowledged the new name of NWFP i.e. Khyber-Pakhtunkhwa. Similar mistake is repeated in the Constitution available at the website of Ministry of Inter-Provincial Coordination, (http://www.ipc.gov.pk). This ministry served as the secretariat for the Implementation Commission that facilitated democratic devolution under the 18th Amendment. 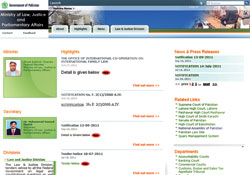 The website of Ministry of Information and Broadcasting (www.infopak. gov.pk), which is supposed to serve as information outreach body, offers the post-18th Amendment version. Here the job has been done so haphazardly that the sequence of initial pages has been disturbed while scanning.

At least the websites of two ministries have partial information about the Constitution. Out of these, the website of Ministry of Human Rights (http://www.mohr.gov.pk) fails to accommodate four new fundamental rights — Due Process, Fair Trial, Right to Education and Right to Information — in its list of human rights. These new rights were acknowledged through the 18th Amendment. The website of Cabinet Division (http://www.cabinet .gov.pk), headed by the prime minister, carries the outdated rules of Council of Common Interests (CCI). After the 18th Amendment, instead of the Cabinet Division, the Ministry of Inter-Provincial Coordination serves as the secretariat of reformed CCI and it has the updated rules adopted in July 2010. The website of the President of Pakistan (www.president.gov.pk) only offers the text of his speech delivered on the signing ceremony of the 18th Amendment Bill 2010 on April 19, 2010, and a press note about the 19th Amendment.

Story of the legislative branch is equally disturbing. The website of the National Assembly (www.na.gov. pk) offers post-19th Amendment Constitution in English. But the Urdu version available there is that of 2004. The Senate of Pakistan (www.senate.gov.pk) links to another private website (http://pakistanconstitution-law.org) where the new version of the Constitution is available. Both Houses of the Parliament have failed to update their handbooks and guides for the parliamentarians. These publications carry explanations and procedures according to the pre-18th Amendment constitutional mechanisms.

The National Assembly amended its Rules of Procedure and Conduct of Business on December 24, 2010. The reformers of these rules failed to grasp Article 215 that deleted an option of one year extension to the Chief Election Commissioner. The Rule 171 of the National Assembly retains this aspect. Similarly, the new rules missed the spirit of Articles (153 (4), 156 (5) and 160 (3B) that, respectively, make it mandatory to lay before the assembly annual report of Council of Common Interests, National Economic Council and bi-annual report of National Finance Commission. The Senate of Pakistan has yet to embark on reforming its rules in the light of changes introduced by the amendment. None of these reports have been laid before either House.

Story of the Judicial Branch is amazing. The website of the Supreme Court of Pakistan (www.supremecourt. gov.pk) does not offer the full text of the Constitution. However, under a link about the Judicature it has the older version of Article 175 and other articles pertaining to the judiciary. But a new link about Judicial Commission of Pakistan offers information about the post-18th and 19th Amendment mechanism about the judicial appointments. The website of Law and Justice Commission of Pakistan (www.ljcp.gov.pk) mandated to conduct legal public awareness campaigns does not offer any version of the Constitution. 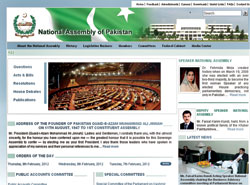 The website of Election Commission of Pakistan (www.ecp.gov.pk) also offers the pre-18th Amendment functions of the Chief Election Commissioner. It fails to grasp that now many of these powers rest with the commission instead of an individual. Secondly, after the amendment, prerogative to call for a referendum is that of the prime minister and the question has to be phrased and finalised at a joint sitting of the Parliament. However, the website has failed to capture these constitutional changes.

After browsing the websites of all the three branches of the state, one fails to understand whether it is sheer contempt of the Constitution or widespread intellectual poverty that has failed everybody to internalise the spirit of the 18th and 19th Constitutional Amendment. If these websites are offering only the outdated versions of the Constitution and confusing the readers and researchers, then why should the government waste taxpayers’ money on the so-called E-Government Directorate.

Similarly, the Pakistan Television and Radio Pakistan have failed to conduct any constitutional literacy campaign to highlight the dividends of constitutionalism in Pakistan. Textbooks taught in classrooms only talk about the Islamic provisions of the 1956, 1962 and 1973 constitutions. We can leave this comparative analysis to researchers. And instead of teaching these provisions of the two dead constitutions (1956 & 1962), it will be prudent to include first 40 articles in Social and Pakistan Study textbooks to highlight the relevance of the Constitution, fundamental rights and principles of policy.

Presently, there appears to be a highly non-serious attitude towards the Constitution. It is precisely due to this approach that widespread cynicism among the masses and lack of their emotional attachment with this vital national document remain logical outcomes in the public sphere.