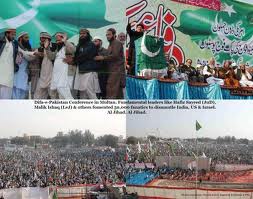 IT has been a decade of bans and lists. As the world of terror revealed itself to be more and more amorphous, nation states have fought back collecting the names, identifying the leaders and eliminating the followers of terror groups.

There are lists of banned organisations in Pakistan and lists of people not permitted in America. Along with lists there are typologies and profiles; the richer the nation, the more detailed the conjured portraits of terror.

In one of the latest episodes revolving around terror and terrorists, Malik Ishaq, leader of the banned Lashkar-i-Jhangvi, was recently released from detention from Kot Lakhpat jail.

A few days later, he attended a rally in Multan organised by the Difa-i-Pakistan Council, seen as a new motley coalition of groups such as the Jamaat-i-Islami, Ahle Sunnat Wal Jamaat (formerly known as Sipah-i-Sahaba), Maulana Samiul Haq’s faction of Jamiat Ulema-i-Islam and others.

Malik Ishaq was not the only freed terrorist present at the rally. Also in attendance was Hafiz Muhammad Saeed, head of the Jamaatud Dawa. Under the new rhetorical flourish of ‘defending Pakistan’ each emerged in public, untouched by previous sins committed under old names.

The massacre of Shia Hazaras in Mastung and the horrific attack on the Sri Lankan cricket team that left this country humiliated all seemed to be forgotten in view of the latest indignities imposed by the United States, the desecration of Muslim corpses by ‘infidel’ soldiers and the absolving magic of a new patriotic name.

The name game — the coining of new names as one agenda for hatred morphs into another — and the painstaking tracing of genealogies of terror by American experts has become such a well-oiled cycle that both ends follow practised sequences enacted with well-rehearsed outrage.

As per this worn script, two days after the rally the US ambassador to Pakistan reportedly warned that aid disbursements to Pakistan would be ceased unless action was taken against the two individuals.

Also as per the stage instructions, Pakistani heads nodded and made responsive motions, yet the curtain fell on January with no conclusions and no catharsis.

Adequate room was left by all involved for sequels that capitalise on the same plotlines with mildly altered angles and slight variations of dialogue. There are many critiques of course: everything written on either side of this issue; the inadequate denunciation and pursuit of terror on one end, the imperialist overreach and illegality of secret wars and surreptitious killings on the other.

Neither is able or willing to see the new pathology spawned by the entrenchment of these roles. Pakistanis and Americans as well as their respective governments are unable to see terror except in the limited shades of this scripted tragedy.

The challenges of labelling terror as endemic and the terrorist as a criminal, his pursuit and apprehension as an act of law enforcement rather than war-mongering at the American end rest on two issues.

First is the fact that the American criminal justice system rests on the precept of innocence until guilt has been established in a court of law and robust scepticism towards pre-emptive punishment even in situations where individuals pose a significant risk of future criminal activity.

Because the core of the ongoing war on terror is largely pre-emptive, there is resistance to the prosecution of alleged terrorists in American criminal courts or as the passage of the National Defence Authorisation Act reveals, the creation of a parallel system that permits acts such as indefinite detention that would otherwise be deemed unconstitutional.

The second factor has been the United States’ long-standing reticence to join the International Criminal Court, established in 2002 through the Rome Statute to prosecute war crimes, genocide and crimes against humanity. The first creates a perception of terror as something finite, existing in particular times and contexts and with a distinct end. The second leaves a vast gap in the transnational legal tools available to prosecute crimes beyond national jurisdictions.

Cumulatively, both leave the issue of terror to foreign policy experts and military strategists, both of whom conceptualise the elimination of terror and the terrorist as a linear task with finite parameters accomplished via bombs and targeted killings.

On the Pakistani end, there is the inability to conceptualise terrorism as a moral issue with dimensions beyond imperialism, nationalism and sovereignty.

As a result, people appear at rallies where known terrorist leaders are present; mobs collect and enact fatwas that punish religious minorities, and any failing to echo the populist rhetoric of denouncing America and railing against the West.

On the basis of this dynamic, the end of the war on terror and the withdrawal of the US and Nato forces is equivocated with the end of terror itself, possibly even the end of all scourges leaving a pristine Pakistan untrammelled by want or famine or disaster.

The beneficiaries of these delusions — American and Pakistani — are Hafiz Saeed and Malik Ishaq, who can discard their banned outfits for new fashions of populism, managing to dupe both those in Pakistan and those in America.

The former invest these chameleons with the bravado of facing down a bossy superpower; the latter believe that the terrorist is a product of ideology, demography, faith and a smattering of other variables.

Neither seems to understand that terror, like crime, is an ugly fact of life, the result of the failure of conscience and a detriment to all human beings. It will never go away, not with the exit of a superpower or the elimination of a terrorist leader.

Its denunciations must rest not on strategic calculations, the disbursement of aid, the passage of shipments, the counting of corpses and ruined lives and destroyed futures, its biggest casualty is our universal loss of faith in the possibility of justice.

Maulana Tahir Mahmood Ashrafi was one of the first people, along with Ahmed Ludhianvi, to meet and greet Malik Ishaq after his release from Kot Lakhpat Jail. Malik Ishaq has personally confessed of killing at least 100 Shia and Sunni Barelvi Muslims.

Watch this video after 6:20, will give you an idea of how Tahir Ashrafi justifies and rationalized Shia genocide in Pakistan.

Malik Ishaq released on the orders of the Supreme Court

Ahmed Ludhianvi explains (January 2012) his two aims of joining the Difa-e-Pakistan Council: (1) to bring the ASWJ-SSP in the mainstream politics; and (2) to defend Pakistan from USA, Israel, India and Iran.

We have previously explained that Shia-Sunni proxy war term is often used by Takfiri terrorists and their apologists to enable and rationalize Shia genocide. In recent past, another camouflaged Takfiri Canadian Tarek Fatah (known on Twitter as #TakfiriTarek and #CanadianZarqawi) uttered similar remarks in which he apostatized the Prophet Muhammad’s beloved uncle Hazrat Abu Taliba (father of Imam Ali) and blamed Shias for their own genocide.

Related post: Pakistan army outsources the Defence of Pakistan to killers of Shias, Ahmadis and Christians