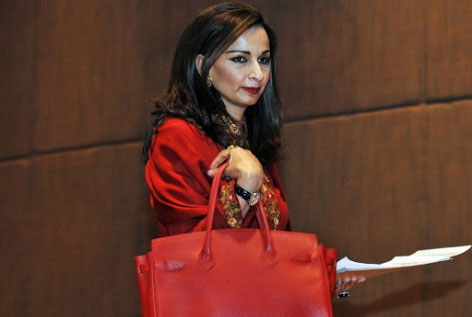 Editor’s note: In the past, LUBP has been castigated for having the nerve to critisize Sherry Rehman.  The latter represents everything that is held dearly by Pakistan’s educated pseudo-liberal chatteratti: glamourous, opportunistic and a disdain for the masses whilst mantaining a facade of pretending to care.  While Shaheed Mohtarma was alive, it was her who directed Sherry to use her communication skills towards the benefit of PPP and Pakistan. However, after her death, Sherry has repeatedly stabbed PPP in the back.  In 2009, she ditched PPP due to pressure from her media collegues.  They wanted her to support an anti-democratic, Islamofascist, Pro-Rape, Pro-Jihadi bureaucratic pressure group and she complied. In 2010, LUBP was abused and attacked for publishing a critique of a petition that supported Sherry when she once again went against PPP  in supporting a media conglomerate powerhouse.  In 2011, Sherry and pro-establishment journalist, Nasim Zehra used the Citizens for Democracy platform to bash PPP which was reeling from the murder of PPP Punjab Governor, Shaheed Salman Taseer.  Just months later, Sherry’s Jinnah Institute published a Pro-Taliban policy paper which makes a mockery of the claim that Sherry is the leading progressive amongst the PPP.  We wonder if she will be held to account by her media friends for her insensitive remarks for the Baloch.

In a previous post, we highlighted how elite media as well as elite human rights groups (e,g., HRW, HRCP) are unduly and dishonestly presenting and promoting Sherry Rehman as a champion of human rights.

The elite media is a term used to describe newspapers, TV channels and other media that influence the political agenda of a powerful elite. According to Noam Chomsky, “[t]he elite media set a framework within which others operate.” The term denotes a structural position within the mass media, however, it is equally applicable to NGOs (so called rights groups, civil society etc) which too act on specific economic or political agendas to promote perspectives and interests of the powerful elite.

Ambassador Sherry Rehman’s recent statement on the state of human rights in Balochistan and the US Congressional Hearing on this issue may serve as an eye opener to those who had some iota of trust in her human rights credentials. (For a balanced analysis of the Balochistan hearing, read Mureed Bizenjo’s post.) In view of her condemnation of Baloch nationalists and shameless defence of a brutal military establishment, Sherry Rehman can be safely placed in the league of Rehman Malik, Babar Awan, Sharmila Farooqi and other apologists of Pakistan army who are firmly rooted within the ruling Pakistan Peoples Party (PPP).

Ambassador Rehman must note that Pakistan cannot continue to conduct a genocide in Balochistan in the name of integrity or sovereignty. She may wish to review the documentary that Al Jazeera has made about Balochistan.

According to Sherry Rehman: “The government is strongly committed to protecting the fundamental rights and freedom in all parts of Pakistan, including Balochistan, and has initiated an extensive programme of constitutional and other reforms to empower all citizens in the continuing consolidation of democracy”. For starters, what good is “democracy” for the Balochs when they are devoid of the right to free speech and even the most basic necessities of life, like food, water, shelter etc. This also includes the natural gas exploited from Balochistan which is abundantly delivered to Karachi, Lahore and Islamabad but is not available to a large number of the Balochs. How can Ambassador Rehman claim that Balochistan is an integral part of Pakistan when it is a known fact that Balochistan was illegally annexed by the Pakistani State post-Partition, and that the government blatantly refuses to provide the Balochs their basic human rights and due share of resources?

“Pakistan is a democracy conducting itself in accordance with the international law.” This is the joke of the year!

Why is Ambassador Rehman worried if issues related to human rights violations are being investigated during the congressional hearing? Is it not true that Balochistan has escaped international media and scrutiny while a most abject repression has been launched against the people there with the security agencies conducting a reign of murder with impunity.

Sherry Rehman’s proclamation “Balochistan is an integral part of Pakistan” cannot hide the fact that Pakistan army is responsible for hundreds of extra-judicial murders of Baloch nationalists since 1947, particularly since 2006 when Nawab Akbar Bugti was target killed on direct orders of former army chief General Musharraf.

Here is how Ambassador Rehman’s statement on the Balochistan hearing was reported in Pakistani press:

WASHINGTON: Taking a strong exception to a United States Congressional hearing on Balochistan this week, Pakistan has termed it an “ill-advised” move that would be detrimental to the trust between Pakistan and the United States of America.

A Pakistan Embassy spokesman in Washington said that Pakistan’s Ambassador Sherry Rehman raised the issue of an exclusive hearing on Balochistan by US House Committee on Foreign Affairs in her meetings with the members of congress and senior officials of the US administration.

According to the spokesman, Rehman said that the government of Pakistan strongly rejects the purpose and findings of the hearing and considers it an “ill-advised and ill-considered” move that will have serious repercussions for Pakistan-US relations.

“Balochistan is an integral part of the Pakistan,” the ambassador said. “Pakistan is a democracy conducting itself in accordance with the international law.”

Sherry said that the elected parliament, the Balochistan assembly, the independent judiciary, a vigorous media and a thriving civil society are avenues for expression and seeking redress of political and economic grievances.

“The government is strongly committed to protecting the fundamental rights and freedom in all parts of Pakistan, including Balochistan, and has initiated an extensive programme of constitutional and other reforms to empower all citizens in the continuing consolidation of democracy,” she said.

She said that the hearing was marked by a “blatant disregard for the history of the issue and manipulated selective facts”.

“It is deeply regrettable that the legislature of a country that calls itself a friend of Pakistan allowed itself to be used as a platform for advocating the dismemberment of Pakistan and provided justification to terrorists attempting to hold Balochistan, and Pakistan, hostage,” the envoy said.

“Pakistan views this hearing with a serious concern and considers it unacceptable. “This kind of an exercise constitutes interference in Pakistan’s internal affairs. The hearing will be detrimental to mutual trust and confidence,” the envoy said. (Express Tribune)

WASHINGTON: Taking strong exception to a controversial Congressional hearing on Balochistan this week, Pakistan has termed it an ill-advised move that would be detrimental to building trust between Pakistan and the United States.

Pakistan’s ambassador to Washington Sherry Rehman raised the issue of an exclusive hearing on Balochistan by a House Foreign Affairs sub-committee in her meetings with the members of the Congress and senior officials of the US administration, said a Pakistani official on Friday.

Ms Rehman said Islamabad strongly rejects the purpose and findings of the hearing and considers it an “ill-advised and ill-considered” move that will have serious repercussions for the bilateral relations.

The government has a strong commitment toward protecting fundamental rights and freedom in all parts of Pakistan, including Balochistan, she added.

“Pakistan views this hearing with serious concern and considers it unacceptable in no uncertain terms. This kind of an exercise constitutes interference in Pakistan’s internal affairs. The hearing will be detrimental to building mutual trust and confidence and will add to suspicions in Pakistan about the US motives in the region and concerning Pakistan,” the envoy said. ( Dawn / AFP)

Specimen of promotion in media

Here are a few examples of how elite media within and outside Pakistan promotes Sherry Rehman as a champion of human rights.

The government appointed a liberal lawmaker and rights activist as its U.S. ambassador Wednesday, swiftly replacing an envoy who was forced out amid allegations he sought Washington’s help in trying to rein in Pakistan’s powerful military. Sherry Rehman, who has faced militant death threats for speaking out against Pakistan’s anti-blasphemy laws often used to persecute Christians, appeared to be a candidate acceptable both to the army and the weak civilian government.

Ali Dayan Hassan, Pakistan director for Human Rights Watch, said the army would prefer a retired general “who would talk their talk in D.C.”

“Sherry is highly unlikely to do any such thing,” Hassan said. “But she represents someone everyone can live with, including the military. The civilian leaders are happy to take ownership of her, and she has resonance in influential and urban sectors of Pakistan.” (Source)

Indeed, in 2009, he (Zardari) had asked her to resign from the information ministry during the heat of tensions with a media group. She switched her imaginative talents and employed the hardworking tenacity to build up a think tank. The Jinnah Institute that she had established took no time to get registered by relevant quarters. As a lightening rod of the same think tank, she remained active on track II as well to find out ways of establishing peace with India and seek a doable strategy to deal with Afghanistan. Her vocal stance on women-related issues, diligent working for some women-empowering legislation and above all her efforts to inject sanity in blasphemy laws augmented her credentials. (Nusrat Javeed in Express Tribune)

KenRoth Kenneth Roth
New #Pakistan ambassador to US @sherryrehman has strong rights background–probably not what ISI would have wanted. wapo.st/rQidUl

KamranShafi46 Kamran Shafi
@KenRoth Yes, but she will not speak on Balochistan

AliDayan Ali Dayan Hasan
While the military will now seek greater influence over #Pakistan’s US policy, @sherryrehman- a progressive democrat will seek to temper it

AliDayan Ali Dayan Hasan
@SherryRehman as #Pakistan ambassador to the US suggests that the military has failed to assume complete control of Pak-US relations.

ijazkhan Ijaz Khan
@AliDayan @SherryRehman @HRW Wow Really? We need to keep the difference between politician even if struggling for rights & a rights activist

Elitist Awards
As a logical outcome of her promotion by elitist media and NGOs, Sherry Rehman has received a number of awards.