Should we not condemn Sunni genocide taking place in Pakistan?

Sipah-e-Sahab Pakistan (SSP, currently camouflaged as Ahle Sunnat Wal Jamaat ASWJ) is a banned extremist organization. Comprising Takfiri Deobandi assets of Pakistan army, the SSP-ASWJ represents a tiny minority of the Deobandi sub-sect of Sunni Islam, and per se does not represent the majority of Sunni Barelvi, Deobandi or Salafi Muslims.

Sunni Muslims in Pakistan are divided into three main sects or sub-sects: Barelvis (70%), Deobandi (25%) and Ahl-e-Hadith (5%).

During the CIA-Saudi sponsored Jihad against the Soviet-backed regime in Afghanistan (1979-87), Pakistan army (ISI in particular) recruited and brainwashed thousands of Deobandi Muslims, most of them from Deobandi madarasahs (seminaries) in Pakistan and Afghanistan, to deploy cheap mercenaries in the so called Jihad in Afghanistan.

There were two types of Takfiri Deobandi Jihadis produced by Pakistan army: Internal and External.

The Internal Jihadis were tasked to attack all those individuals and groups (political parties, religious sects, rights groups etc) who could cause an obstruction in the way of Pakistan army’s international Jihadist agenda. Within Pakistan, the internal jihadis focused on killing leaders of progressive political parties (e.g., ANP, PPP, other progressive intellectuals etc) as well as religious sects opposed to radical Deobandi-Wahhabi agenda. Shias, Sunni Barelvis, Ahmadis and Christians were particularly targeted by the brainwashed Jihadist Deobandis.

The External Jihadis were tasked to operate in Afghanistan, India, Bosnia, Chechnya and other countries to promote the goal of international Islamic Empire or Caliphate.

In view of the mounting international pressure in the aftermath of the 9/11, General Musharraf declared the extremist Deobandi organization (the internal Jihadi branch) Sipah-e-Sahaba as outlawed in 2002. The organization was banned in 2002 as a terrorist organization under the Anti-Terrorism Act of 1997.

However, while the Sipah-e-Shaba Pakistan (SSP) was apparently banned, the organization was secretly allowed to operate by Pakistan’s military establishment. The organization continued its Jihadi-sectarian activities by simply adopting a new name “Ahle Sunnat Wal Jamaat” (ASWJ).

The adopting of the ASWJ was a cunning move by the Sipah-e-Sahaba leadership because Ahl-e-Sunnat Wal-Jamaat or Jamaat-e-Ahle-Sunnat is a name particularly used by Pakistan’s Sunni Barelvis, moderate Sufi Muslims who constitute a dominant majority of Pakistan’s Sunni Muslims and are strictly opposed to extremist Deobandis’ (SSP) Jihadi-sectarian agenda.

In fact, Jihadi-sectarian militants of Sipah-e-Sahaba Pakistan (which also operates as Lashkar-e-Jhangvi LeJ) have conducted numerous attacks not only on Shias, Ahamdis and Christians but also on Sunni Barelvis in which hundreds of Barelvi Muslims have been killed or injured.

Takfiri Deobandi militants of the SSP-LeJ are pro-Wahhabi and puritanical in their ideological interpretation and practice of Islam and consider Sunni-Barelvi Muslims as polytheists (mushrik) and deviant Muslims. In the last few years, LeJ-SSP-Taliban terrorists have attacked dozens of Sunni Barelvi congregations including attacks on sufi shrines in Islmabad, Karachi, Lahore, Peshawar etc and also attacks on Eid Milad-un-Nabi’s processions and Sunni Barelvi mosques. Numerous Sunni Barelvi leaders have been killed by the LeJ-SSP militants including but not limited to Saleem Qadri, Abbas Qadri, Sarfraz Naeemi and several others.

List of Deobandi and Wahhabi Muslims killed by Sipha-e-Sahaba:

30 May 2004: A senior Deobandi religious scholar and head of Islamic religious school Jamia Binoria, Mufti Nizamuddin Shamzai, was gunned down in his car while leaving his home in Karachi.

19 September 2008: A bomb exploded at an Islamic religious school in Quetta killing five people and wounding at least eight. The school was run by Jamiat Ulema-e-Islam of Maulana Fazal-ur-Rehman.

Ahl-e-Sunnat Wal-Jamat (Sipah-e-Sahaba) is a Deobandi terror outfit hiding behind a Sunni mask, in reality they are an extremist Deobandi outfit, which do not represent Sunni Barelvis nor Deobandis.

Here are two clips from his speech against extremist Deobandi terrorists of the Sipah-e-Shaba and Jaish-e-Muhammad: 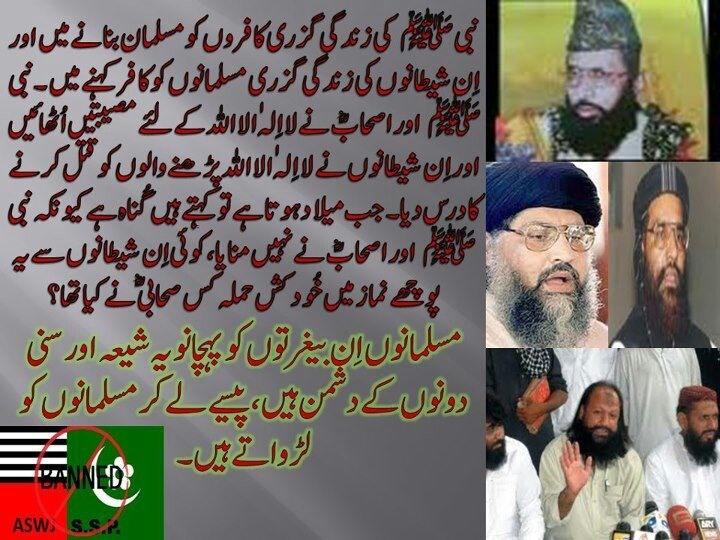 Click here to post a comment
US house committee hearing on Balochistan: Oversight and Investigations – by Mureed Bizenjo
Hafta-e-Wahdat: All divides pulled down as Shias, Sunnis celebrate the birth of Prophet (pbuh) as the ‘Week of Unity’