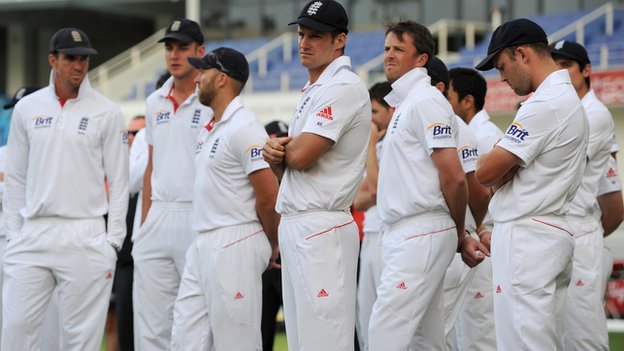 Setting the record straight about the whitewash in the desert

Today, in the exotic desert setting of Dubai, Pakistan completed a much awaited 3-0 whitewash of England, presently the first-ranked Test team in the world. This historical win is certainly the icing on the cake after Pakistan’s two earlier Test victories in the ongoing 2012 series.

The whole nation duly rejoices as their cricketing heroes under an unobtrusive Misbah ul Haq have emulated a feat that was achieved the last time in a Test match 105 years ago. Some cricket analysts and hosts on our TV channels have suggested as if this feat of a team scoring less than 100 runs in the first innings of a Test match and still winning, has happened only once or twice before in Test cricket. This is not true.

As a matter fact, this feat has been achieved six times in Test cricket before Pakistan emulated it today, the seventh such instance in Test match annals. For the benefit of cricket enthusiasts and to set the record straight, let me present here abbreviated scores of all the seven such Test matches starting from the earliest:

Incidentally, the first time this feat was achieved also happened to be the same Test match when England were beaten at home for the first time in Test cricket, 29th August 1882. This defeat led to the famous ‘Obituary’ published in the Sporting Times, London the next day as a mocking write-up on the “English cricket that died at The Oval” and which ultimately gave birth to the legendary Ashes since played between England and Australia.

It may also be noted that the feat of a team scoring less than a hundred in the first innings and winning that Test has been achieved six times in the first 30 years of the 135-year Test match history since the first ever Test match was played between Australia and England from March 15-19, 1877 at Melbourne. And now it goes to the credit of the mercurial Pakistan team to have repeated this feat after over a hundred years.

The writer is a communication consultant, an Amnesty International “Prisoner of Conscience – 1984” and a former first-class cricket umpire.

Click here to post a comment
Who are these people attacking Eid Milad-un-Nabi processions in Pakistan?
How to make a great story on “krupshion” – Ansar Abbasi-Adil Gilani 101!