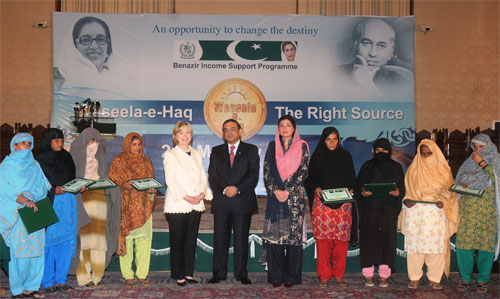 Chided by an anchor for ignoring the Bhutto promise of roti, kapra aur makan, Mr Zardari retorted by referring to the Benazir Income Support Programme (BISP). With election rallies beginning to catch the public mood, he followed it up with a public statement at the inauguration of a BISP initiative in Sindh by declaring that the PPP was delivering, while others only talked. Such faith in this potential vote-winner may not just be for its name.

Conceptually, the BISP is a programme of cash transfers for the bottom 25 per cent of the population below the poverty line. It does not offer any makan, but the recipient gets a monthly income supplement of a thousand rupees, considered enough to two to three weeks of atta for a family of five and perhaps, some kapra. Despite rising fiscal deficits, budget allocations have been generous and have exceeded the capacity to spend. In the first year, 2008-09, Rs13.3 billion was spent against an allocation of Rs34 billion to reach out to 3.5 million families. Undeterred, the allocation in the following year was more than doubled to Rs70 billion to reach five million families — a sizeable number of voters. Actual spending was Rs32 billion. Again in 2010-11, expenditure against an allocation of Rs50 billion was Rs35 billion. The budget for 2011-12 has the same allocation as that of the previous year.

There has been more support than opposition. In the beginning, when parliamentarians were involved in beneficiary identification, some political opposition was witnessed. Engaging NADRA to verify the 4.3 million forms warded it off. Only 2.3 million families were found to be eligible. The electronic media ran stories of bogus forms. This was as misinformed as the description of the registered voters not verified by NADRA as bogus. Not being in NADRA’s record does not necessarily mean that the person does not exist. The authority still does not have full coverage; more so in the case of the BISP, as the target here are women heads of the family — only 73 per cent have CNICs.

Economists oppose subsidies, but only those kinds that are not targeted, such as cheaper wheat or fuel which distort prices. A subsidy on wheat, available to the rich and the poor alike, is roughly the same as the total allocation for BISP, a programme of targeted cash transfers. There is some debate whether these transfers should be unconditional or conditional, as the former tend to promote dependency rather than exit from poverty. At present, the main BISP initiative makes unconditional grants but conditional transfers like the self-employment scheme called ‘wasila-e-haq’ are also beginning to take shape. These attributes have bought in donor support. The World Bank funded a door to door survey of the entire population, in order to identify eligible women on the basis of a poverty scorecard, as has been drawn in the Asian Development Bank, USAID and Britain’s Department for International Development.

Except for petty corruption of postmen delivering cash, one has not heard of a major corruption scandal. There are, however, features that protect the PPP votebank. There is a rural bias in the poverty scorecard. The ultimate aim though, is to cover all districts. The immediate coverage is of rural Sindh and southern Punjab. No provincial break-up is available for the number of beneficiaries and the money disbursed. A World Bank working paper shows that increased decision-making power for women affects family expenditure patterns. Should such shifts not affect voting patterns?

Balochistan — the only way forward -by Sanaullah Baloch
All aboard: Pakistan turns back the clock with luxury train travel