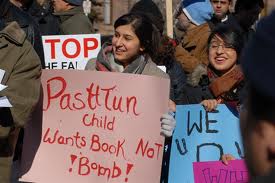 Nationalist movements promote and protect national language, culture and identity through political expression. They aim to control their affairs without outside interference. They are about managing their economic resources by themselves. They may want autonomy within a multinational state in order to structure it to protect their identity, or in certain cases for an independent state of their own.

Taliban meet none of these criteria in Afghanistan or Pakistan, and therefore cannot be considered a Pashtun nationalist movement. They take ideological and political inspiration from Arabs and other non-Pashtuns. They have consciously, as a matter of policy, targeted different cultural traits of Pashtuns, like tribal councils and folk music; they are not concerned about the language and promote mostly Arabic and/or interestingly, Urdu; Economic resources or their control is not their concern; neither is any political or administrative manifestation of Pashtun identity their goal.

They have killed a large number of traditional Pashtun elders in FATA and banned the Jirga as means of dispute settlement in areas under their influence. They have been eliminating the Pashtun way of life.

Taliban have, as a matter of policy, targeted cultural traits of Pashtuns, like tribal councils and folk music; they are not concerned about Pashto and promote Arabic and/or Urdu
The term ‘Taliban’ referred to students of madrassas. The current use of the term started when Mullah Umar led some of those students to rise against the atrocities of the Mujahideen groups who had fought against the Soviet Union. In the beginning, even Americans considered them a force to counter pan-Islamists as well as the neighbouring Shia Iran. But very soon, international terrorists, mainly Al Qaeda, established connections with the Taliban.

Today, the only connection that they have with Pashtuns is that the term Taliban is a Pashto plural for the Arabic term Talib (student), and that they are using Pashtun territory. The only thing that unites these diverse groups is that they follow a particular brand of Islam. Quite a large number of them come from Punjab.

The Pakistani state considered the intervention of Soviet Union an opportunity to achieve long-cherished policy aims based on its threat perceptions from India. It had always considered Afghanistan’s closeness with India as against its security and also feared Afghan claims about the Durand Line. In this situation it had always seen the Pashtun nationalist with suspicion. The unitary post-colonial state of Pakistan had always considered all the pluralist democratic identity movements as a threat. Due to the Afghan connection, Pashtun identity politics and autonomy aspirations, even within Pakistan, were considered more so.

Pakistan’s use of religious extremists as a tool of policy began in early 1970s when most of the Mujahideen leaders who rose to fame in 1980s were backed to oppose President Daud’s government in Afghanistan. This policy was furthered later by promoting the Mujahideen amongst the resistance movement at the expense of Pashtun nationalists (Afghan Millat, one such Pashtun Nationalist Party from Afghanistan, was denied freedom of action in 1980s) amongst the anti-Soviet resistance. The Pakistani state aimed at a social and political engineering of Pashtuns. It was believed that a secular Pashtun cannot be trusted. There was similar mistrust of the secular freedom fighters in Kashmir too.

The Taliban were supported before 9/11 with the similar aims – as an alternative to those liberal Afghan Pashtuns who were getting increasingly fed up of the warring Mujahideen groups. Even after 9/11, Pakistan does not talk about Pashtun tribal elders or Pashtun nationalists of secular leanings when it expresses concern about Pashtun representation in Afghanistan.

In FATA, the current Taliban concentration includes a sizeable number of non Pashtuns and Al Qaeda. The extremist challenge in Punjab is taken to be a completely separate problem, and the very strong presence and role of Punjabis in FATA is often denied.

The approach also suits pan-Islamists because it makes it easier for them to use Pashtun territory on both sides of the Durand Line as a sanctuary and provides them with a constant source of of foot soldiers. They are aided by the lack of modern state governance in those area. But none of the insurgents talks about this lack of governance, or the rights of Pashtun in any part of Pakistan or Afghanistan.

Click here to post a comment
Mullah, the Talib and Pashtun society – by Asad Munir
Shia killing: If we tolerate this, our children will be next – by Absar Ul Hasan