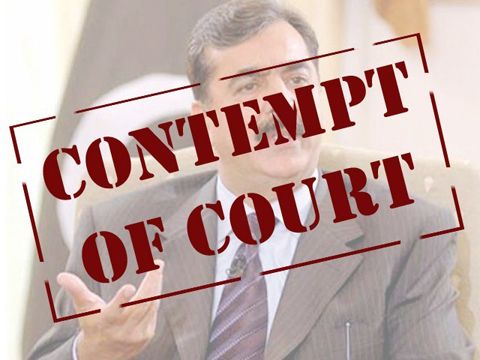 On Thursday, we saw a new anti-PPP decision from the so-called independent judiciary. Prime Minister Yousuf Raza Gilani has been summoned to appear before the Supreme Court on February 13 for the framing of the contempt of court charges. This could be another sad moment of Pakistan’s fragile democratic history.

The conspiracy behind the memogate has mostly fizzled out rather quickly, and now court is using NRO as a cover for a deep-set enmity against an elected government: Independent analysts and observers say the court is trying to destabilize PPP-led government & oust President Zardari because of a conspiracy against democratic government. They also claim the Memo and now NRO case can’t be separated from tensions between the government and the army. And PPP sympathizers accused judges of plotting with the military to wage a witch-hunt against president and PM.

In the past, the army has asked Pakistani civilian leaders to resign and influenced judicial proceedings against them. The military is also unhappy with the civilian leadership after a US commando raid killed Osama bin Laden in May 2011, but the army has ruled out a coup and is instead backing the courts to force a change of government or destabilize the democratic system.

The Judicial Military Alliance appears determined to destabilize the fragile democratic system, a conspiracy for power that has paralyzed the civilian government and distracted other pressing issues, mainly related to citizens and social services and Pakistan’s new democratic contribution in the South Asian region.

Deputy Speaker Sindh Assembly Shehla Raza has said the seven-member larger bench of the Supreme Court had already made up its mind for framing charges against the prime minister in the contempt of court case. Talking to media persons at the Supreme Court building, the Sindh Assembly deputy speaker said the court has given its verdict and now it is their right to speak on it. She was of the opinion that prime minister’s counsel Aitzaz Ahsan was not provided full opportunity to argue in the case.

Shehla Raza said that they have no intention to protest against the court verdict nor President Zardari would like that. She said they are not among those who are scared of short term decisions and pointed out that people are alive who were whipped for thousands of stripes. She said they suffered and went to the jail for democracy and they would continue to do so for the cause of democracy.

She said that perhaps the court remembered thousands of pending cases and therefore gave very little time to Aitzaz Ahsan.

Replying to a question about contempt of court, Shehla Raza said that since a verdict has come, she has right to speak on it. She said that that on 4th April, 1979, Zulfikar Ali Bhutto was hanged on the basis of a court verdict and since then people of Pakistan were committing contempt of court by voting for the PPP.

PM’s lawyer Aitzaz Ahsan says “ the court should also hold those generals responsible for contempt who had not only dismissed judges but also arrested them along with their children.,”

President Supreme Court Bar Association Yasin Azad says the situation is moving towards a constitutional crisis “therefore all the institutions should keep in view the future of this country at every step.”

Though we have a democratic system in place, but I am tempted to say that the judicial military alliance is ruling in Pakistan, and its all about superior pride, irrational fear of democracy, and perhaps vindictiveness against PPP. This ‘independent judiciary and it’s judicial activism’ increasingly come at the expense of people’s representative democracy’, and widening gulf & rift between state institutions. Such sorts of anti democratic decisions, in the name of ‘judicial activism’ have devastating democratic consequences.

The leading democrats and liberals have lost trust in these courts and their selective justice; there is widespread criticism of selectivity in the application of constitution, we all wish the ‘independent court’ should show same sort of ‘judicial activism’ against creators & designer of NRO. Justice does not mean sparing powerful military dictators and targeting weak civilian elected representative. Listen seriously to the views of Asma Jahangir and Ali Ahmed Kurd. Today, the whole nation is standing behind the prime minister of Pakistan in facing establishments conspiracies against an elected government.